Water is a necessary ingredient for human survival – as well as for optimal physical and mental performance.

If you’re reading this, that means you’re alive (unless I’m wrong about zombies), so you’re at least getting the bare minimum. But are you drinking enough?

For years, we’ve been told that we’re all dehydrated, and that if we want our bodies to work properly, we need to drink our 8 glasses a day.

Some have even gone further, stating that 8 glasses isn’t enough, that you should be drinking three or four liters a day. Others say you have to time it right and spread out your water drinking over each hour of the day.

Or, to ask a more general question, how do you really know if you’re hydrated? And how can you make sure you stay hydrated on a daily basis?

After many hours spent researching this topic, I hope to answer that question for you today. Here’s everything you need to know about hydration.

Let’s start with the idea that you need to drink 8 glasses of water a day.

This idea has been out in the wild for decades, with many believing the source to be a notice from the Food and Nutrition Board put out back in 1945, which recommended that people get about 2.5 liters of water a day.

From there, the idea spread and entered the general consciousness. Unfortunately, what seems to have been left out is the very next sentence in that recommendation:

“Most of this quantity is contained in prepared foods.”

This puts quite the damper on the idea that you need to be gulping down 2.5 liters of plain water every day. More importantly, no scientific evidence in defense of that idea has surfaced in the intervening decades.

In 2002, a research review published in the American Journal of Physiology concluded as much. It also noted:

“This conclusion is supported by published studies showing that caffeinated drinks (and, to a lesser extent, alcoholic beverages like beer in moderation) may indeed be counted toward the daily total.”

As that notice from 1945 mentioned, solid food counts toward the total as well – though the Mayo Clinic states that it counts for around 20% rather than most of it.

And, of course, this will vary based on your diet. 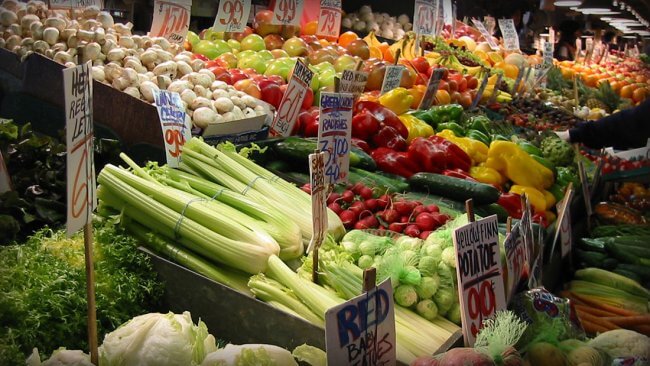 If you eat lots of fresh fruits and vegetables, it’ll be higher, and if you’re like me and eat a bowl of nails for breakfast every morning, than you’ll need to lean heavier on your beverages.

The Basics of Hydration and Fluid Balance

If you don’t need eight glasses a day, how much do you need?

The answer is, predictably: It depends. Your body’s hydration needs vary based on your weight, gender, environmental factors like temperature and altitude, and – of course – your level of physical activity.

Luckily, your conscious brain doesn’t need to worry about any of these factors because, as it turns out, your body already has built-in mechanisms for maintaining an optimal fluid balance. 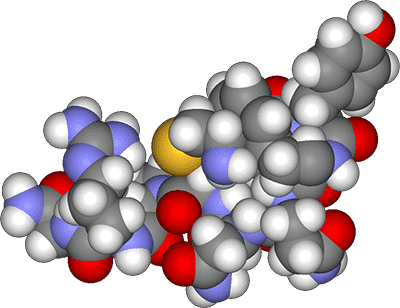 For instance, when the body detects that it’s a bit low on fluid, it releases an antidiuretic hormone called vasopressin, which increases water absorption in the kidneys and returns it to the bloodstream in order to restore balance.

When that isn’t enough, your body brings the issue to your attention by making you thirsty, to which you’re almost certainly going to respond by drinking something if you can.

There’s no meticulous timing or measuring needed – and this makes sense. Until the very recent past, the human body had to evolve and adapt in an environment where there was no guarantee of regular access to water. Systems for maintaining a good fluid balance were a necessity.

Simply put, you need water to survive, but your body will tell you how much and when to drink it. Follow the Thirst Rule: When you’re thirsty, drink something to quench that thirst.

If you really want to double check your hydration, a good way of telling whether or not you’re hydrated is by checking the color of your urine. 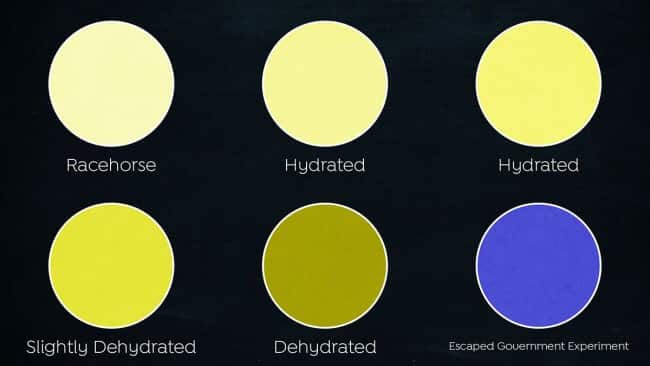 Now, at least in terms of hydration, the one other thing you need to survive is a healthy balance of electrolytes.

In general, an electrolyte is any substance that conducts electricity when mixed with water.

Within the human body, they do everything from regulating the functions of your nerves and muscles to balancing blood pressure. They’re also essential for hydrating the body; without them, water would have no way to get into your bloodstream and cells. It’d just pass right through you like you were a tube slide. A really dead tube slide.

Some of the most important electrolytes in your body include:

Guess what? That’s right: you don’t have to worry about meticulously tracking these either.

As long as you’re eating enough and follow a relatively balanced diet with plenty of fresh fruits, vegetables, and high-quality protein sources, you’ll get all the electrolytes you need from your normal meals.

This means that even if you exercise regularly, you have no need for all the electrolyte “benefits” of sports drinks. Sure, drinking a quart of Brawndo before a workout will probably make you feel more energetic – but that’s due more to the huge amount of sugar in it than anything else.

Exceptions to the Thirst Rule: The Runs (Both Types)

Now it’s time to talk about the exceptions, because there are always exceptions.

For the vast majority of people – like, 99.9% of the population or more – the thirst rule holds true. So who falls into that 0.1%?

First and foremost, people who are ill are susceptible to dehydration. If you have serious diarrhea (the runs #1), you can lose a lot of fluid and become dehydrated very quickly. Other illnesses can cause this as well; that’s why hospitals carry oral rehydration solutions that are specifically formulated to re-hydrate you as quickly as possible.

So, if you’re sick and are, for lack of better term…. expelling a lot of fluids, then listen to your doctor’s hydration recommendations.

The other exception is a specific group of athletes. As Mark Sisson points out in his book The Primal Blueprint, athletes who train intensely on a regular basis can often come into training sessions slightly dehydrated, which can lead to decreased performance.

However, most athletes tend to drink quite a bit of water while training, and for endurance athletes like marathon runners, cyclists, and triathletes (the runs #2), the risk is actually hyponatremia, or water intoxication, which is a dilution of the sodium concentration in your bloodstream.

This is a seriously dangerous condition that’s caused by overhydration, which is something that endurance athletes are prone to doing unconsciously.

In fact, an observation of participants in the 2002 Boston Marathon found that 13% of tested runners had hyponatremia after the race.

I won’t go too far into the details here, though you can check out Tim Noakes’ book Waterlogged: The Serious Problem of Overhydration in Endurance Sports if you want to learn more.

I do want to mention a couple of things, however.

First, unless you’re running for more than four hours out in the heat, you’re almost certainly not at risk for hyponatremia. If you’re just running a few miles or doing a normal workout, drink when you’re thirsty and don’t worry about it.

Secondly, for those hardcore endurance athletes, Runner’s World has an online sweat rate calculator that you can use to determine how much you should drink while on a long run, which may be a helpful starting point in figuring out your hydration needs.

Lastly, it needs to be pointed out that there’s some serious controversy about the ability of sports drinks to guard against hyponatremia effectively by replacing electrolytes.

While sports drinks do contain electrolytes, their concentration of those electrolytes is typically around only around 1/5th of what it is inside your bloodstream. Per the Runner’s World article linked above:

“…blood has a far higher concentration of sodium (~140 mmol/L) than sports drinks (10-38 mmol/L), so you’re diluting the sodium content of your blood no matter what you drink.”

So while you’re ingesting more electrolytes, that sports drink is also adding yet more water to your system.

That isn’t to say that those electrolytes won’t help at all, but it does highlight the importance of ensuring that you don’t overhydrate while on a long run.

With all of our science bases covered, I want to move onto a more anecdotal problem that I’ve observed in my own life. I’ll call it flow-state dehydration.

Here’s the deal: I’m the kind of guy who gets really into the work I’m doing. 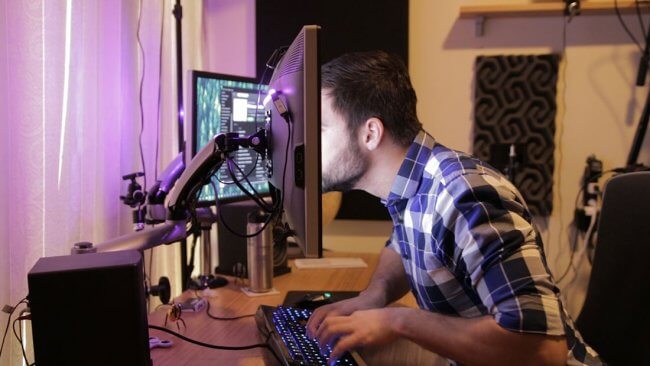 If I’m doing research or editing a video, I’ll often get in the zone for several hours. During that time, I’ll completely forget to eat or drink.

On certain occasions, I’ve noticed that this actually leads to slight dehydration. More importantly, when I actually do become conscious of my thirst response, I’ll often reach for something more novel than water like coffee or orange juice (fortunately, I’m no longer reaching for energy drinks – ever)

Now, as I mentioned in my previous video about coffee and dehydration, I don’t think a daily cup of coffee or orange juice is a problem.

But it becomes a problem when I get ultra-focused on my work, let my discipline slip, and drink three lattes in a day instead of sensibly switching to water after the first one.

As a result, I’ve set a single, simple goal for myself. I have a 27 oz. stainless steel water bottle, and my goal each day is to drink the entire thing once.

That, in addition to my moderate amount of coffee, tea, and milk, ensures that I’m hydrated.

Additionally, I always make sure my backpack has a water bottle holder on it. Otherwise, I’ll likely forget to bring the bottle with me, which leads to more than the necessary amount of lattes being purchased. 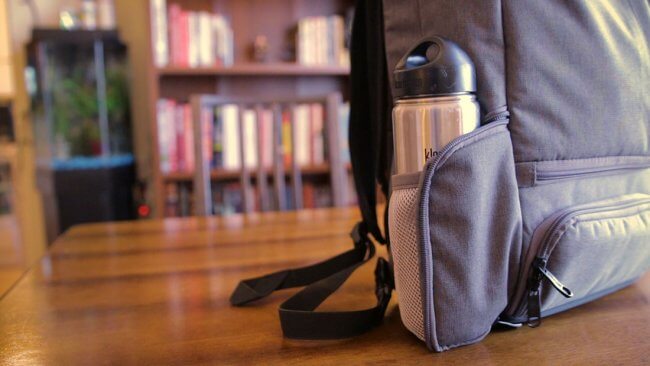 Those two simple practices work well for me, and as we’ve established, nothing more complicated is really needed.

However, if you really want to track your water intake, I’d recommend doing so in a general-purpose habit tracker like Habitica or Momentum. While there are specialized hydration tracking apps out there, most of them stick to the whole 8-glasses-per-day thing, which we’ve shown here to be unnecessary.

In general, optimal hydration can be had by following three rules:

Hopefully this article summarized everything well enough for you. However, I’m also going to link to some additional sources below so you can learn about hydration in more depth if you want.