A couple of years ago I did one of those What’s In My Backpack videos that all the kids seem to be doing these days.

And despite the fact that my backpack didn’t contain anything truly exciting, like a gateway to a pocket dimension filled with talking hot dogs, or disco ball gloves, people seemed to enjoy it anyway.

Given the response that article received, I figured it was high time to take a renewed look at the gear I’m carrying on a daily basis. 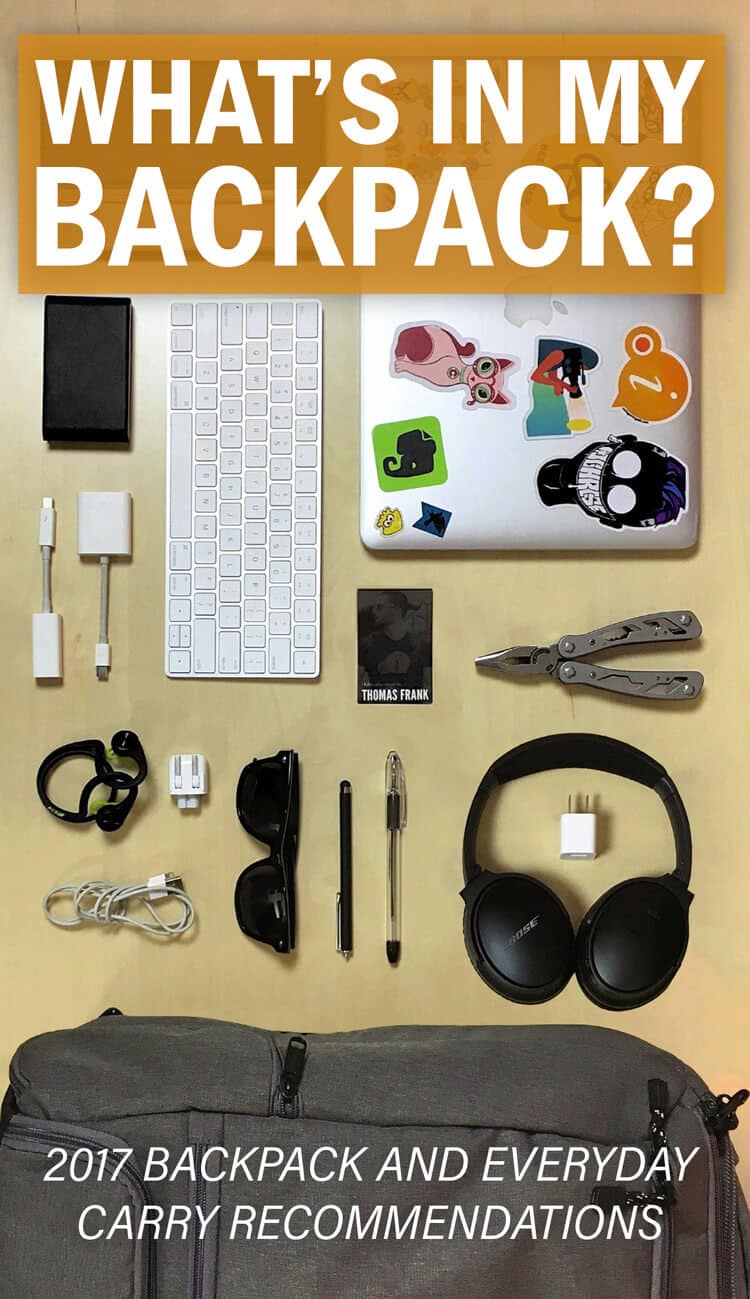 I’ve gone through some pretty big life changes since that first video. Most importantly, I moved from Iowa to Denver, Colorado back about six months ago, which means I’m using my bike to get around a lot more often.

Additionally, since I’ve started making an effort to dress better AND often travel with camera gear, I’m no longer a single carry-on traveler.

My trusty old Minaal Carry-On served me well for quite a long time, but even with its cavernous amount of space, it’s not enough to safely carry my running shoes, camera body, several lenses, and other gear alongside a week’s worth of clothes and a laptop.

As a result, I had to start traveling with both a backpack and one of those roll-y suitcases, which probably have a more professional name – but I like saying roll-y suitcases. In case you’re curious, I’m using the London Fog Coventry suitcase, which is usually small enough for the overhead bins on an airplane. Plus, when I do end up having to check it, the gold trim helps distinguish it from all the other bags out there.

Once I started using the roll-y suitcase, though, the Minaal backpack became… – well, frankly, it became overkill. While it’s an excellent bag for people who want to live the single carry-on lifestyle (since it can fit so much), it’s a bit of a pain to use when it’s not full. It just becomes kinda floppy.

So the search began for a new bag. And, after a bit of experimentation, here’s what I settled on. 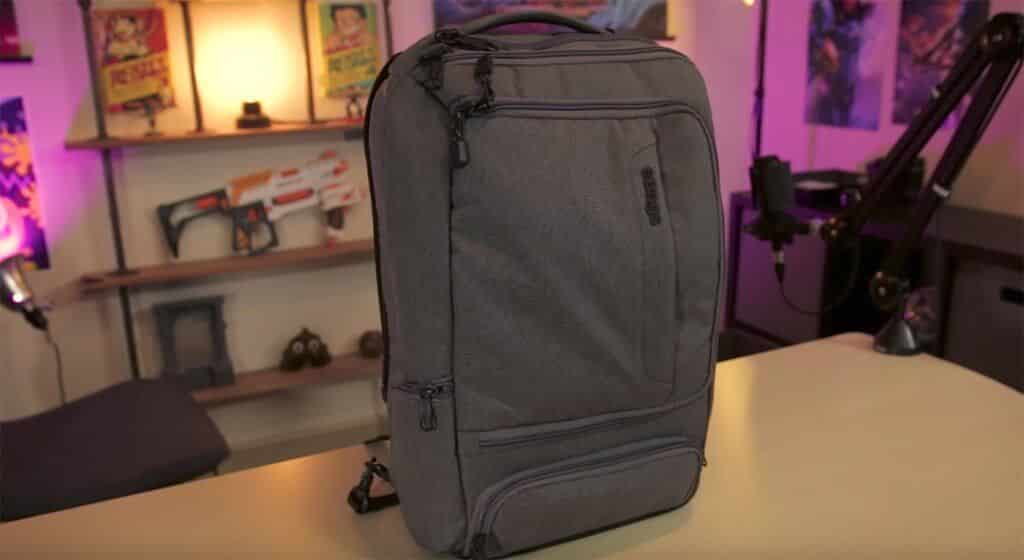 While it’s a smaller backpack than the Minaal, the way its compartments are designed and laid out makes it a much more functional and easy-to-use daily driver backpack. Where the Minaal was a bit unwieldy and required some fiddling to get things out of it, this backpack stands up on its own and has well thought-out spaces for all the important pieces of gear I use in my work.

If you want to see more of the backpack than just the two shots I’ve included here, check out the video at the top of this article. I’ve included more shots of it there. But to give you a quick run-down:

However, by and far away my favorite feature of this backpack is the compartment at the bottom. 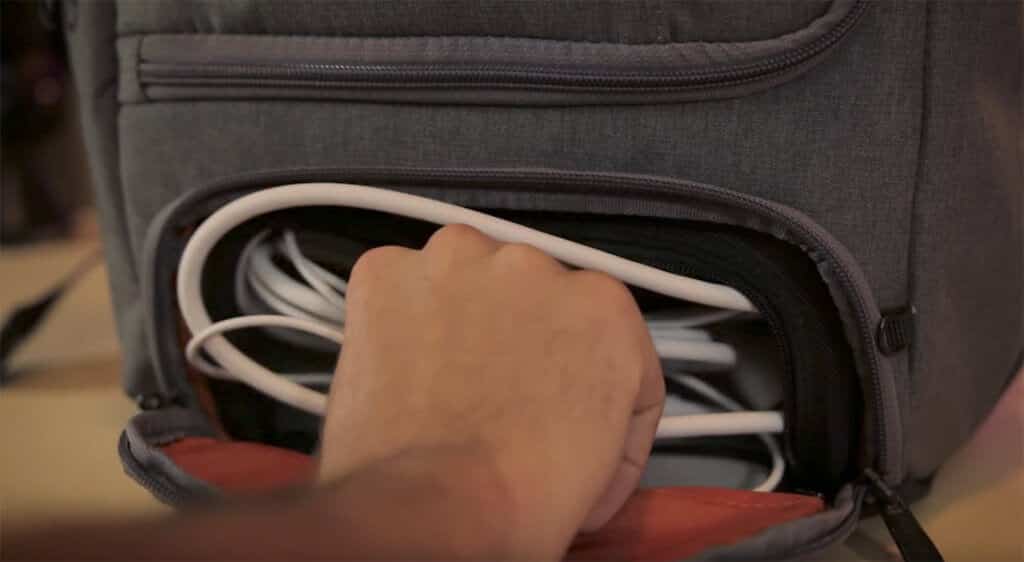 Opening it up reveals a small space that’s perfect for a laptop charge cord and brick. Every other backpack I’ve used in the past has required me to shove my MacBook charger in some inconvenient spot or another. With this pocket, I can store it or take it out in seconds. I adore this feature. 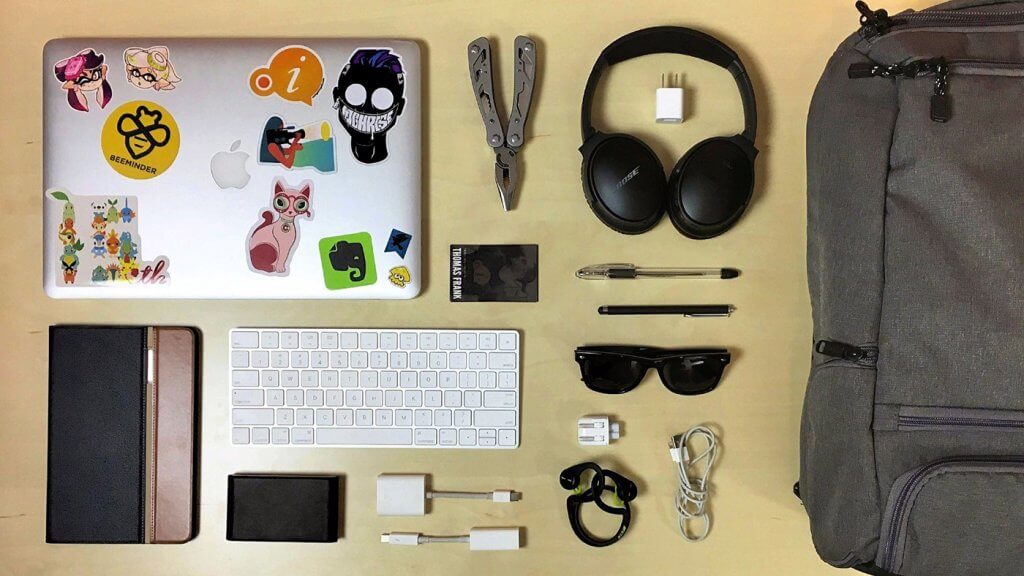 But what about the gear, you ask?

I think I’m actually carrying fewer things in my backpack now than when I made my original video two years ago. However, several of the things that remain have been upgraded, and I’ve made a couple of additions as well. Let’s go through them.

That’s about it for my bag! If you’re looking for more gear recommendations, you might want to check out my college packing guide, list of book recommendations, and my general resources page – which includes many of the apps I use on a daily basis. Also, take a look at this general guide for what to put in your backpack.