How many students do you know that only focus on their grades?

When you’re spending years of your life and taking on debt to invest in your success, this is a terrible practice. When I interviewed Wine Library TV/VaynerMedia founder and all-around brilliant guy Gary Vaynerchuk, he had the same opinion:

“I’m completely baffled as to why people think amassing debt to get a piece of paper that everyone else has and doing nothing else to set themselves up for success is a good idea.”

As I’ve thought more and more about this, I’ve come to the solid conclusion that students who do this are massively limiting their potential. In fact, they can only reach 1/3 of it by sticking only to the books. That’s because they’re neglecting two other areas of equal importance.

As a student, your ability to achieve your goals is dependent on improvement in three key areas:

Collectively, I call these three areas the Student Success Triangle. 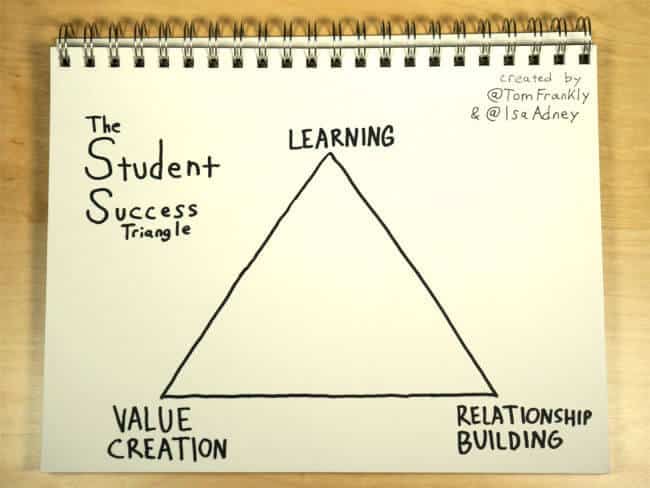 I came up with this illustration while doing a podcast interview with Isa Adney from Community College Success (that episode will be up soon). We both liked the concept so much that each of us needed to write about it – this is my post, and you should read hers as well.

I used a triangle for the concept because I want to emphasize that value creation and relationship building are no less important than the actual learning you do in college. They’re all incredibly important for reaching your goals, and they’re all complementary.

This is what you’re in college to do, right? I won’t waste too many words here; learning is absolutely vital to your success.

The more you learn, the more you update the map inside your mind to match the territory that is reality. You make fewer mistakes and better understand the ones you do make.

“Being ignorant is not so much a shame, as being unwilling to learn.” – Benjamin Franklin

You become more capable of making accurate predictions, better able to update your beliefs based on evidence, and more adept at doing a little thing called innovating.

The ability to understand information and combine it to create new information is what drives progress forward. The more you learn, the better you’ll be able to do this.

Your ability to participate in the global dance that is human life relies on your ability to create value. Something has value if other people want it and are willing to trade something else for it.

Unless you’re living off of charity, you need to create value in order to survive. After all, money is simply a quantified representation of value – an efficient way to facilitate bartering in an economy with billions of players, goods, needs, and wants.

To earn money – a representation of value – you have to create that value. The more you can create, the better off you – and, hopefully, those around you will be. At a base rate, you can get a job at McDonald’s and create value deemed to be worth $8-$9/hour – but that’s not going to get you closer to achieving your goals anytime soon.

That’s why it’s so important to build up your ability to create value. The better you get at your craft, the more value you’ll be able to command. If you’re a web developer, for example, you might be able to command $10/hour when you’re just starting out in your first paid gig.

“Make something people want… There’s nothing more valuable than an unmet need that is just becoming fixable. If you find something broken that you can fix for a lot of people, you’ve found a gold mine.” – Paul Graham, Y Combinator founder

Keep putting out good work and improving your skills, though, and eventually you might find yourself heading up an entire development agency and bringing in millions a year.

It’s not just about money, either – the better you get, the more beneficial your work will be for the people who use it.

Lastly, you need to realize that the world is a social place. Not a whole lot gets done without interactions between multiple people.

Sure, you can sit down and write a novel on your own. But without building relationships, you can’t get people to read it, help you edit it, give you feedback, publish it, or share it with their friends. Without other people, it’s just a pile of paper sitting there doing nothing.

Here’s another great tidbit from my conversation Gary:

“The biggest reason I would send my kids to college would be so that they can hang out with friends and go to parties. The social maturity aspect is the most important part of the college years.”

I don’t think Gary actually believes partying is more important than learning or creating value; he was underlining the importance of learning how to build relationships.

In my opinion, this is the most neglected area of the triangle. We go to class, do our assignments, and read other books to learn. We seek out internships and do side projects in order to build the skills needed to create value.

But how often do we intentionally try to build relationships? You’ve got your core group of friends, but what are you doing on a regular basis to expand your network?

Beyond that, what are you doing to appreciate the efforts of others? Everyone loves recognition and appreciation, but so many of us spent most of our time thinking of ourselves instead of giving out that much-craved appreciation.

All three of these areas – Learning, Value Creation, and Relationship Building – need deliberate, regular attention in your life.

Now, earlier I mentioned that all three of these areas are complementary to each other, and I want to round out this post by elaborating on that.

In U.S. politics, there’s a concept called the Iron Triangle that illustrates how the 3-way relationship between Congress, interest groups, and the bureaucracy is beneficial for all parties.

Congress gets electoral support from the interest groups, and in return drafts laws favorable to them.

The interest groups lobby for things the bureaucracy wants, and in return enjoy low levels of regulation and, *ahem*, “special favors.”

Completing the triangle, the bureaucracy makes policy choices and carries out things that benefit Congress and get political support and mad cash in return.

Now, the dynamics of the Iron Triangle don’t always work to the benefit of the American people as a whole, but they definitely benefit the parties involved in said triangle.

The same can be said for the party involved in the Student Success Triangle – namely, you. Each point of the triangle benefits the others:

One last thing: As I alluded to in the title (in a pretty heavy-handed way, I’ll admit), the Student Success Triangle is not just for students. You don’t magically lose the need to improve in these areas when you graduate – there’s room for growth and improvement as long as you’re still breathing.

Create value, learn constantly, and build relationships. To really reach your potential, you need all three. You can’t skimp on one and hope the other two sort of “make up for it.”