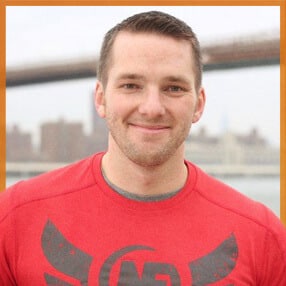 This week’s episode is all about doing what it takes to achieve whatever goal you have.

Here’s a paraphrased quote from one of my favorite parts of the conversation:

“F*** motivation. You need to structure your environment and your daily habits – essentially put horse blinders on – to get yourself to do what it take to achieve your goal.”

These are awesome words from one of the people who has done the most to inspire and guide me in my professional life – my friend Steve Kamb.

You might remember Steve; I interviewed him back in Episode 14, and he’s the founder of Nerd Fitness – one of the best and most entertaining fitness blogs on the internet.

He’s also the guy who essentially turned his life into a video game; after writing down all his life’s goals on a huge bucket list, he took inspiration from the video games he played while growing up and created a game-like structure for achieving those goals. By categorizing each goal, defining rough point values for each one, and establishing levels he could reach, Steve’s been leveling up his entire life for the past five years.

In addition to a ton of other things, Steve’s video game-esque list led him to paying off his student loans early, speaking at Facebook, and traveling to dozens of countries. His list was one of the two influences (the other being Joel Runyon) that led me to creating my Impossible List – the goal-setting tool that has enabled me to do a lot of things I never thought were possible in the past.

One of the goals that has been on Steve’s list for a long time is “become a published author,” and when we chatted early last year, he told me that he was on the way to achieving it (and waking up an hour early each day to write).

Now, that goal has been crossed off his list. His book is called Level Up Your Life, and its essentially a guidebook for doing what Steve (and I) did – solidifying your goals, creating plans and accountability systems for achieving them… and turning your life into a video game.

I’ve really been enjoying the book so far, and I’ve put the link to where you can buy it down below. Whether or not you decide to, though, I think you’ll really enjoy this conversation; we dig deep into going beyond motivation and creating systems to hold yourself accountable to your goals.