Update: After lots of further research, I have changed my mind about the usefulness of this technique. I don’t recommend it at all anymore. If you’d like to really dig into this subject, I suggest reading this article by Dr. Piotr Wozniak. Here’s a brief excerpt:

I’ll leave the original article here for history’s sake (for now). At some point I’ll probably write a new sleep article, so keep your eyes open – but only during the day.

Is it possible to sleep only two hours a day and still retain functionality beyond that of a caffienated dippy bird?

, and I was particularly interested in his chapters about sleep. While the first chapter, “Engineering the Perfect Night’s Sleep”, was great, I was more interested in the second, “Becoming Uberman”. It describes a technique called polyphasic sleep, which is a sleep method that allows you to sleep as little as two hours a day while still feeling fully rested and retaining normal functionality.

Polyphasic sleep involves taking multiple short naps, which are spaced at regular intervals throughout the day. This is much different than monophasic sleep, in which you go comatose for one gigantic, eight-hour block of time. When you sleep monophasically, only a portion of your time spent sleeping is spend in REM sleep, which is the sleep you want. If you recall from my prior post on sleep, your sleep cycle involves five stages. Only the last of the five is REM sleep, and the other four stages are essentially wasted time. You can’t eliminate this wasted time in monophasic sleep; you need it in order to get into those REM stages. 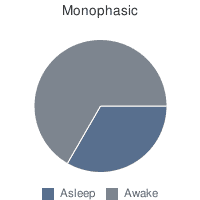 Under monophasic sleep, you go through about four REM stages in an eight hour period. Each REM cycle is 20-30 minutes, so you’re really only getting two hours of real REM sleep a day. Polyphasic sleep is different, because once you’re used to it, your body slips into REM sleep right away. Since you’re only napping for 20 minutes each time, almost the entire nap is spent in REM sleep. 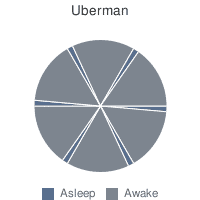 While the Everyman method seems to be the sane choice for someone just starting out, I’m going straight for the Uberman. The reason is simple – I want more time. Sleep is something I wish I didn’t have to do. With the Uberman method, I won’t have to do much of it.

I’ll be journaling my experiences with this sleep method as I go along – the results will most likely be recorded over at Bodybuilding.com, or maybe even here. According to Steve Pavlina’s reflection on his own polyphasic experiment, I’ll feel like a complete zombie for around a week. So anything posted during the next week may or may not feature infantile grammar and ideas even a hippo would dismiss as ridiculous. I apologize in advance. Hopefully this experiment will give me more time and boost my productivity. There’s only one way to find out.