What’s the first thing you do when you wake up in the morning?

If your answer was either:

…then you should seriously consider developing a morning ritual.

The writer Leo Babauta gives the following reason for having his morning ritual:

“The reason I like having a morning routine is that not only does it instill a sense of purpose, peace and ritual to my day, but it ensures that I’m getting certain things done every morning … namely, my goals.”

My reason for building a morning ritual is similar: It’s full of small, productive habits that act as quick wins. Starting my day out with these habits builds up momentum, which carries me throughout the day while I’m working on my bigger projects.

I find that it’s a lot easier to get into a state of flow with my main work this way, rather trying to sit down and start “cold”.

In his book The Motivation Hacker, the author and programmer Nick Winter talks about the concept of success spirals. When you consistently see yourself succeeding at something, it helps to build your confidence and increases the likelihood that you’ll be successful at the next thing you try.

“Motivation increases with Expectancy – confidence that you will win.” | Tweet This

Developing and sticking to a morning routine gives you several things you can see yourself succeeding at every day. This, in turn, builds your confidence and helps you succeed at even bigger goals.

In addition, a morning ritual gives you a reason to get out of bed in the morning – one that you’ll actually look forward to. I don’t know about you, but I never really looked forward to waking up and going to work or class in the morning. Now, however, I have a couple components built into my ritual that I’m always excited about.

Lastly, the time you spend on your morning ritual is likely to be the best “you” time that you’ll get throughout the day. Most people aren’t up and about in the morning, meaning it’s unlikely you’ll be interrupted. I love my time alone in the morning; on the odd morning that someone else is up as early as I am, I’m actually a little annoyed.

Get an Early Start

For most of my life, I was the kind of person who would sleep until I absolutely had to wake up. Since I knew this about myself, I would always schedule classes or work as early as I could in the morning – thus forcing myself to get up at a decent time every day.

Still, this meant that most mornings saw me hopping out of bed, frantically throwing clothes on, and running out the door to make it to work on time. Most mornings.

But then there were those rare occurrences. The mornings when, somehow, I’d wake up a couple hours early and weirdly not feel like going back to bed.

Like lucid dreams, these mornings were elusive but amazing. I had to time to relax, actually eat breakfast, and maybe even read for a while. I loved them.

But my sleepy self wouldn’t let me have them often… so I knew I needed to come up with a binding method of getting up early. Something that would be too painful to weasel out of.

The method I came up with? Essentially, I threaten myself with both public shame and monetary loss. Here’s how it works:

You can get all the details about this method in my article on using Buffer as a wake-up tool.

I’ve been using this early wake-up method for about five months now, and it’s had a 100% success rate. I’ve never failed to wake up and get started while using it.

Another method that might work for you is building habits with if-then triggers. These conditional triggers make it easy to solidify the habit you’re trying to do – in this case, waking up early. 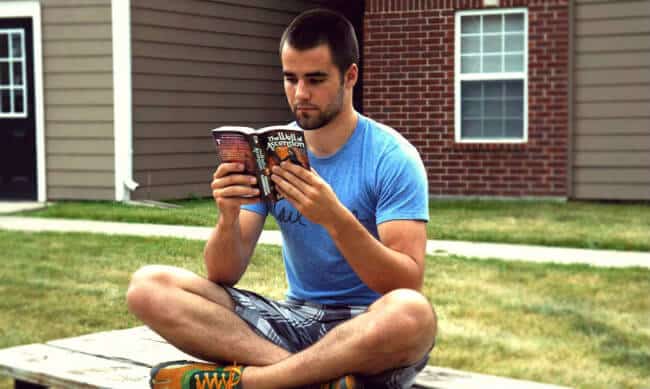 Once I wake up, I immediately get out bed and get moving. I get up about 15 minutes before my Buffer-scheduled tweet is set to go out, which gives me ample time to get to my computer and reschedule it without having to rush.

This is also done so I can pack a few parts of my ritual in before logging into Buffer, specifically:

Once these things are done, I’m pretty much over any of the remaining grogginess that I woke up with. I then go into my room, turn on my computer, and deal with Buffer. After that, the rest of my morning ritual goes like this:

The food is part of the ritual as well, actually; I eat pretty much the exact same thing every single morning – a habit I picked up from my friend Matt Giovanisci.

In case you’re curious, here’s what my simple, tasty breakfast consists of:

Pretty simple stuff, but it’s way more nutritious than a bowl of cereal.

How to Build Your Own Ritual

To start on your own morning ritual, you’ll first need to find a method that lets you get up early enough to have ample time before your first real commitment of the day. You can try the method I described above, or find something else that works for you.

After that follow these 5 steps to implementing your ritual:

I also recommend getting into the practice of tracking each of the habits you build into your morning ritual. Looping back to The Motivation Hacker’s explanation of success spirals:

“Success spirals – backed up by the simple tracking of success – were the key habit for me. Starting tiny, tracking success, and slowly strengthening the habit of building habits: this is how you tend your success spirals.”

When I started practicing my ritual in earnest, I used Lift to track all of the tasks in it – plus some other habits I was trying to build, like flossing every day.

These days, I’m using HabitRPG as my main habit tracker and daily/near-future task manager. For me, the video game mechanics – like gaining experience for my character whenever I practice my habits and get things done – provide a great source of extra motivation. Plus, it’s just fun (especially since I’m in a party with my roommate Martin).

Whether you want to keep it simple with something like Lift, or get really geeky with HabitRPG, find a way that lets you track your progress.

When I started, flossing every day was actually really hard for me. You’ll notice that it’s not on my Daily list in the screenshot above anymore – that’s because it’s become so automatic at this point that I don’t even feel like it’s worth earning EXP for. It’s as ingrained as brushing my teeth is now.

Which is exactly the point all of this.

If you’re looking for some more practices you could implement into your morning routine, here are some suggestions:

Be Wary of Derailing

Before you go to bed each night, mentally run through all the habits in your morning ritual and think about what their dependencies are. Examples:

The less friction you face during your morning ritual, the better.

When you’re starting your morning with lots of little productive habits, it’s very easy to derail when you can’t do one. The “what-the-hell” effect is a killer.

I’ve had a few mornings in the past where I’ve woken up unable to find my headphones, or realized I didn’t have any eggs. On those mornings, I found myself checking email too early, or wasting time on the internet for two hours. Not really a good start to the day.

Minimize those mistakes; plan ahead each night, and your morning ritual will go smoothly.

Remember why building strong habits is so useful:

Creating a morning ritual is an excellent way to start building some small habits, which help set the tone of your day and eventually help you build motivation to create even bigger habits.