In my opinion, there are three broad factors that contribute more to your success than any other:

I got deadly serious about habit-building about halfway through 2014. You can read a bit more about it in my 2014 year-end review, but to sum it up, I started waking up early, built a productive morning routine, and created a habit of publishing content on a much more regular basis.

These habits were so successful in part because I used some great tools to track them (such as Habitica, formerly HabitRPG), but I believe the main reason for their success is that I learned how habits work.

The resource that taught me how they work was Charles Duhigg’s book The Power of Habit, and today I’ll share five of the most important lessons I learned from reading it.

If you can’t see the video above, you can watch it on YouTube. 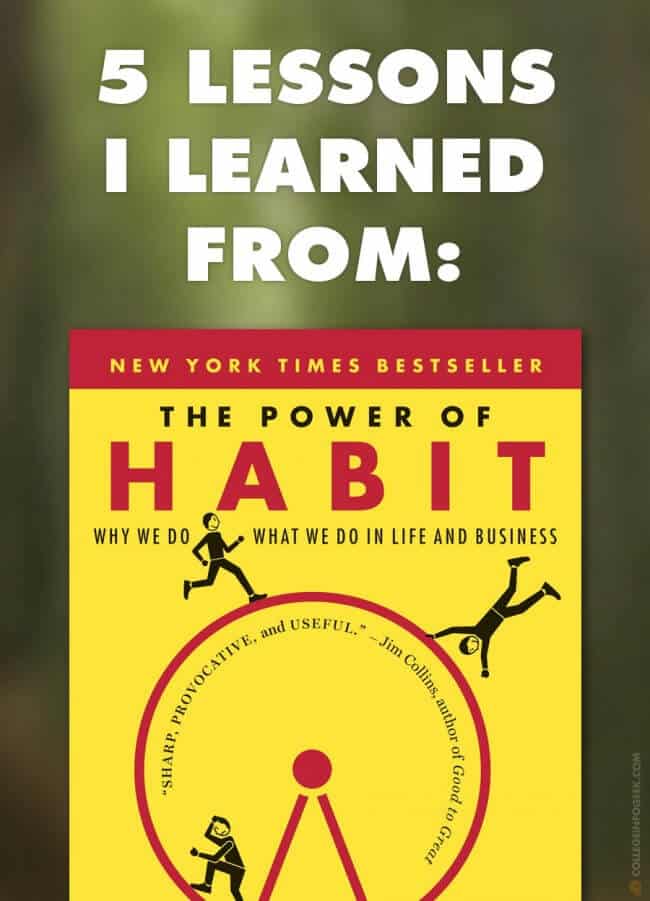 Habits can be broken down into a 3-part “habit loop”, which is composed of:

A cue has to trigger a habit, otherwise that habit isn’t going to run.

In this way, habits are much like “if/then” statements in coding languages; a condition needs to be met for the code in the statement to run.

Almost all habit cues fall into one of five categories:

If you have a habit of eating a donut during the day, the cue for eating that donut could be any one of these. Maybe you get a little hungry around 3:00pm in the afternoon, or maybe you pass a donut shop on your way to work.

In the book, Duhigg mentions that he used to have a habit of getting a cookie on most workday afternoons.

After analyzing the habit, he realized the main cue that triggered it was an emotional desire for socializing. Getting the cookie usually included standing up and going to talk with co-workers for a while.

There’s actually a fourth component to the habit loop: craving.

When a habit is in the initial stages of being built, the brain’s reward response – essentially a dopamine spike – is activated when the habit’s reward is received. Makes sense, right?

However, as the habit becomes more ingrained, this changes. Eventually, the reward response happens right after the cue triggers the habit. It happens in anticipation of the reward.

This creates a craving to get that reward, and serves to keep the habit going strong.

The books talks a lot about how to change habits, but one of the most interesting parts I remember reading about had to do with patients of knee replacement surgeries.

Knee replacement requires rigorous rehabilitation exercises after the operation, which are essential to a full recovery. However, they’re really painful to go through. Many patients can’t muster the willpower, and they never recover.

Researchers learned that the patients who wrote out a plan of what they’d do at inflection points – times where going forward is painful – were much more successful at recovering.

The lesson here is that planning in advance on how to deal with the times where the motivation quit is high will help to keep you from actually quitting.

Some habits, once built, have a tendency to help people build other habits. These are called keystone habits, and they do this by helping people create “small wins” in their lives.

The example given in the book was about dieters; in a study, it was found that dieters who went through the simple act of keeping a food journal were successful at losing weight.

Keeping the journal helped them identify patterns in their lives they didn’t know existed before, and also gave them the motivation to build more healthy habits.

I absolutely love this book, and I think everyone should read it. If you understand how habits take shape in your brain, you can more effectively start to build good ones and break the bad ones.

If you’d like to read this book, you can support this site by buying through this link:

This book is part of my essential reading list for students, and if you’re looking for other good books, I’d recommend checking it out!

By the way: This video/article is part of a new series on CIG I’m calling 5 Lessons.

While I share a lot of what I learn from books in my regular content, I’ve always wanted to take time to really dig into one specific book. This is what the 5 Lessons series will do.

Whenever I finish a book that I think you’ll find a useful, I create a video like this one to share five of the most important lessons I learned from it.

This way, I can share useful books with you – without feeling like I have to review them (I’m not very good at criticizing things).

Hopefully you enjoyed this one, and keep an eye out for the next one!