For the past two months, I’ve been using a simple trick with Buffer that forces me to wake up early every morning.

This is a habit I’ve always found extremely hard to get into, so figuring out an external system that actually works is awesome. The fact that it hinges on Buffer is a bit weird – but trust me, it’s effective.

Yep. If you haven’t heard of it, Buffer is a tool that lets you schedule tweets and Facebook/LinkedIn/Google+ posts ahead of time. With it, you can enter your tweets and posts whenever you want, knowing they’ll be spaced out over the day and be posted at times when people are more likely to see them.

That’s the thinking behind this method – I use the threat of social shame (and monetary loss, as you’ll see) to make myself wake up on time.

Here’s how you can use it too.

I make sure to give my self a 15-minute window to move the tweet once I wake up, as I need time to wake up, drink some water, and get to my computer.

When it comes to creating a tweet, it’s a good idea to use something that would be embarrassing or painful enough to motivate you – but not bad enough that it would do damage to your life if it went out accidentally.

There’s always the slight possibility that some piece of technology could be broken when you wake up – your computer, the power in your house, the internet, etc – which would render you unable to edit your tweet.

Even more likely is the possibility of forgetting to reschedule the tweet after waking up. I’m guilty of this. While the Buffer wake-up method has worked 100% of the time at getting me out of bed, there was one (only one) morning when I actually forgot to edit the tweet and it went out.

For this reason, I’ve crafted my tweet so that it will:

Crafting it this way increases the potential embarrassment because my followers are much more likely to call me out if it’s going to profit them. It also means that sleeping in just once will probably cost me $25.

There’s one other part to my tweet: the caveat. “Assuming my alarm didn’t malfunction”

I think this is a good thing to add, as you never know if something will happen to your alarm. If it’s not your fault, it’s not your fault (though after a couple weeks my body has started automatically waking up before the alarm goes off).

“But doesn’t the caveat give you a really easy to sleep in and just lie about it?” – a friend asked

Nope. There’s no way I’d ever lie about this. In reality, the $25 I keep in my bank account every morning isn’t that big a deal. The fact that this method works 100% is infinitely more valuable.

If I lie even once, this method will be broken FOREVER.

Setting that precedent would mean that the technique would no longer be binding, because I’d know that I’ve lied in the past and got away with it. The moment I lie, it’s broken.

I actually came up with this idea when I was a junior in college; I’d use it only on rare occasions when I needed to wake up extra-early to finish an assignment or study for a final. At that time, it was truly my nuclear option. That meant I definitely didn’t want to break it.

However, using it on a daily basis wasn’t something I wanted to do at the time. As I’ve learned, it can sometimes be just as hard to pre-commit and use a binding tool as it is to actually do the thing you don’t want to do.

Now that I’m done with school and my work is entirely self-driven, I’ve found that I pretty much have to wake up early and follow a morning routine in order to have a productive day. As a result, Buffer wake-up is a tool I use every day, and it’s incredibly valuable.

For me, the potential hassle of Paypaling five different people is also another strong motivator. However, you might not be willing to deal with Paypal at all. Or maybe you’re pretty new to Twitter, and don’t yet have enough followers that would see your early-morning tweet.

I was thinking of a way to completely automate the punishment for sleeping in so Buffer wake-up can be useful even if you fall into those camps. Here’s what I came up with.

Beeminder is a goal-tracking tool that allows you to pledge money, which you’ll have to pay if you fail. I use it for several things, including keeping my inbox clean and writing blog posts consistently. However, it’s also pretty easy to set it to punish you if you sleep in. 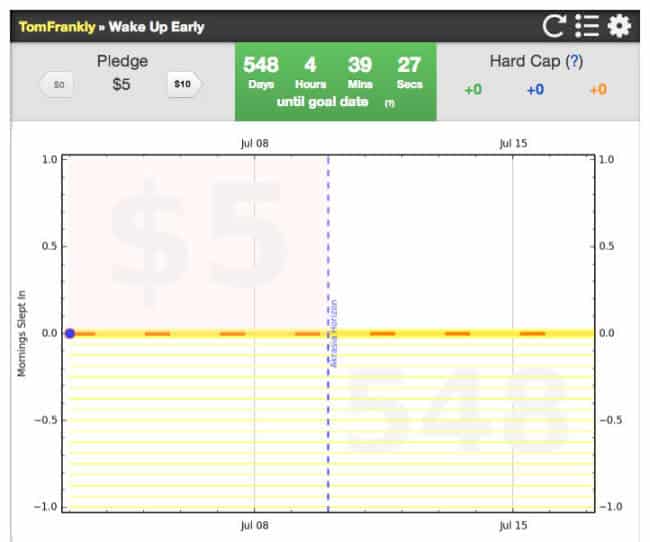 This is my graph on Beeminder. It’s a “Do Less”-type goal, since the data points that would be entered are the tweets that Buffer sends out when you sleep in – and you don’t want any of those to ever go out.

Therefore, your graph should always be a boring, straight line with no points. I’ve made my graph public, but it’s probably not much fun to look at!

Here’s the process for creating this type of goal for yourself in Beeminder:

Boom. Your mornings are now being Beeminded. However, there is one other little task to do:

Click the gear icon to head to your goal’s settings. Click the Terrifyingly Advanced section, scroll down, and uncheck the Pessimistic Presumptive option. This option is only for goals with manual tracking, so you don’t want it.

Lastly, you need to set up a way for Beeminder to be able to collect data from Twitter. You can do this with IFTTT, a service that lets you create if-then integrations with different web apps. To use it, make sure your Buffered tweet contains the same hashtag that the recipe is watching for – in my case, #sleepingin.

The email’s subject should be yourbeeminderusername/goalURLslug – so mine would be tomfrankly/wakeup.

Leo, one of Buffer’s co-founders, wrote a great post on sleep and productivity that contains another useful tip. Instead of just waking up to your alarm and doing whatever you feel like, tie waking up to an immediate event:

“Keep the alarm, but plan the first thing you will do and tie it to a specific time. Mine, for example, is that I have breakfast immediately at 7:40.”

This is an interesting twist on using if-then logic to form habits; instead of using the initial trigger to strengthen the following action, you’re using the action to strengthen your motivation to do the trigger.

I mentioned that I give myself a 15-minute window after waking up to reschedule my tweet; while this does give me some safety to deal with potential tech issues, it’s also meant to give me time to practice a few immediate events that further strengthen the motivation to get going for the day.

Here’s how the first 15 minutes of my day go:

These preceding tasks help me to fully wake up, which eliminates the possibility that I’ll groggily reschedule my tweet and then go back to bed.

In the end, you won’t know what sort of wake-up hacks will work for you unless you try them for yourself. However, I’ll say that this method has worked better for me than any other. In the past few months, I’ve been much happier overall due to my better morning habits.

What’s your best tip for waking up early?