This is a guest post from Aaron Couch, a good friend of mine who’s been reading CIG since the early days. Since I haven’t done any DIY content in a while, this post mapping out his process of building a home office on the cheap is very welcome. Oh, and you should follow him on Twitter.

While Thomas has written before about finding great study spots, some of us like to work in the comfort of our own homes – which leaves us with the challenge of building a suitable home office.

As a writer, I’m constantly at my computer, but I really never had the ability to “build” my own office when I graduated from college and moved back home last year. Moving out, recently, gave me the opportunity to do so.

I moved 1,400+ miles from home and was immediately faced with the realization that I would need to find a way to put together something that I could work at all the time without putting strain on myself.

Now there are a lot of options for building a home office. The only problem for me is that I am pretty low on funds, so I can’t afford to buy a brand new desk, chair and anything else that comes with a proper workspace.

Instead, I turned back towards my frugal nature, which has helped me time and time again.

Before you continue reading, I want to stop the objections that you’re about to have.

See, while reading, you might think “Not everyone gets as lucky as you.” (with respect to the deals I found that I’m about to show you) and perhaps there may be other thoughts as well

The fact is, it’s not in what we’re given, but what we do with what we have.

And  really, it’s all in the mindset. Are you looking to save as much as you can and willing to do the work required, or are you impatient and just want a quick fix? The home office-building methods below are for those that fall into the former camp.

Other Considerations To Keep In Mind

There are two “drawbacks” to building a workstation for practically nothing:

This isn’t an article about how to make the nicest looking home office that your friends will envy – it’s about building a functional office on an extremely tight budget.

You might not have the nicest looking setup, but the goal is to do the best with what you have. Upgrades come later… and even those can cost very little if you are patient and look in the right places.

Speaking of being patient, don’t expect your inexpensive home office to just appear overnight. It’s different for everyone, but mine took me about two months to complete.

What You’ll Need To Do

What you need for your office is likely going to be different than what I need.

However, the methods I used to build mine can most likely work for you regardless of the equipment you need. Here they are:

I’m a pretty big advocate of Craigslist, so when I moved, it played a huge roll in helping me put my office together. I used it to find things for free or for very little, and I also used it to barter and trade services.

The first item I got off Craigslist, upon moving, was a desk. I was so stoked, I blogged about it.

It wasn’t perfect – for one, it was made of mostly particle board and it had a few blemishes, but the frame was quite sturdy. Secondly, it had several levels, providing plenty of space and prevent clutter. The best thing about it, though, was that it was free – I found it just sitting on a street curb. 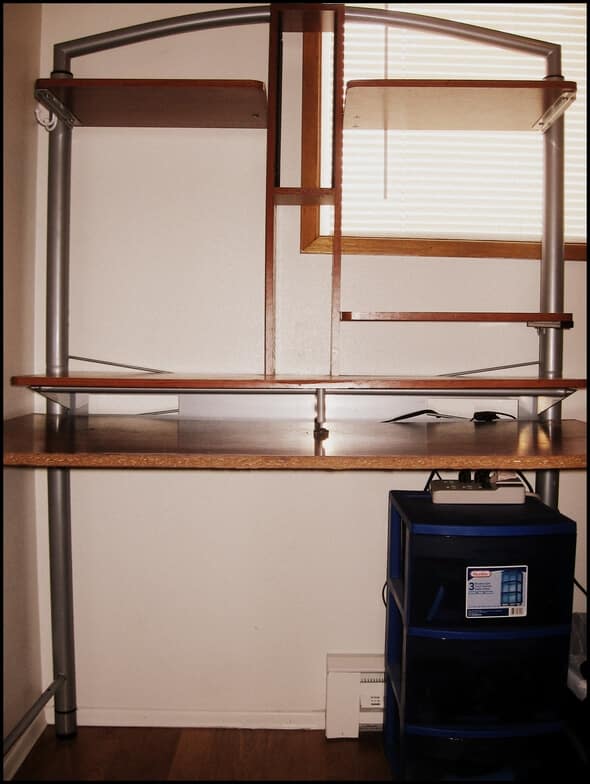 I continued to find more and more useful things, such as a nice leather chair for $15 (which I negotiated down from $25) and four various-sized plastic drawers all for $20 (which is usually the price of one, brand new). 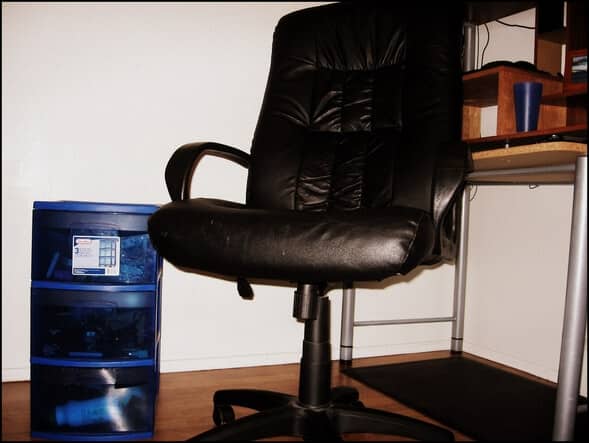 Again, you can’t expect inexpensive things to be in pristine condition, but that doesn’t mean you have to compromise on quality.

For example, there were a lot of leather office chairs on Craigslist for around $15-25, and certainly for more, but I shopped around and found one that had everything I needed, like adjustable height, arm rests, and the ability to lean back or lock it into place.

However, this was nowhere near close to being finished as my current setup only enabled me to work sitting down, and since I am typically working at my computer all day, I wanted something that I could use to alternate between sitting down and standing up.

After looking at this article on different standing desk designs, I got an idea to take the casing of a single plastic drawer that I got and put a piece of plywood I had laying around on top of it.

This expanded my workspace while standing up, but when I wanted to sit down, there wasn’t a lot of room for my laptop and at the time I didn’t have a wireless keyboard or mouse, which made it even more difficult to work around. 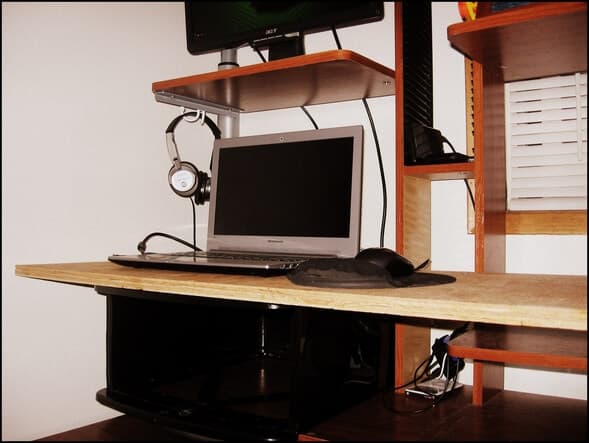 I got an idea to modify that piece of plywood to fit my desk better; the only problem was that the only power tool I had was a cordless drill.

So. I turned to Craigslist again: 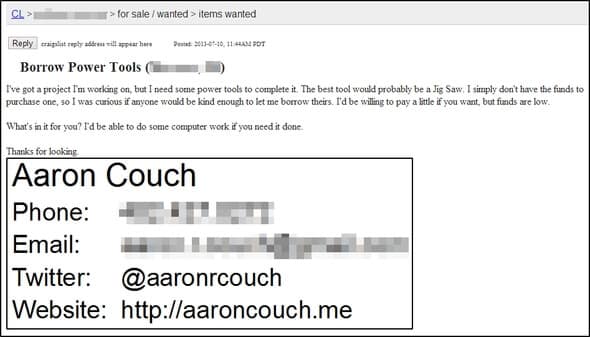 I posted an ad on Craigslist asking to borrow someone’s power tools. Of course, I wasn’t asking to do this for free – I included that I could offer my computer skills in exchange.

The ad sat there for a few days with no response. Then I got a reply that was far more than I was expecting.

It was from a guy who owns a cabinet-making shop in a town about 25 miles (40 km) from where I’m at. I was so stoked that I, again, blogged about it.

I took my plans and plywood with me to his shop, but we agreed to not use the plywood I brought and to build a better one, instead.

The end product turned out far better than I imagined: 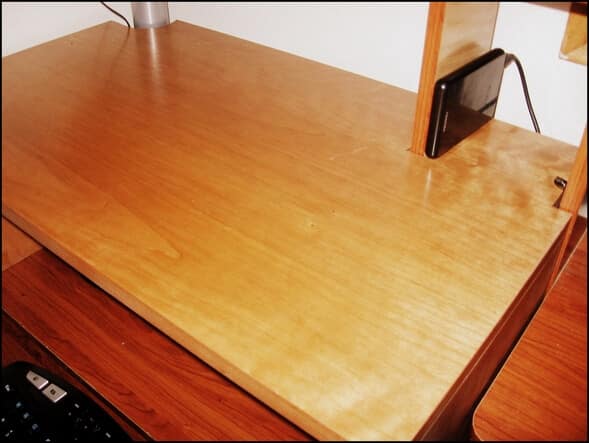 That simple ad not only allowed me to turn my desk into a stand-up desk for free, but he and I are continuing to work together on other projects as well.

You already know that the Internet is chock-full of deals on everything imaginable.

Amazon is a great place to get basically anything you want: headphones, $4.5 million-dollar paintings, whatever. I used it to buy an anti-fatigue standing mat and a wireless keyboard and mouse.

Make sure to check the Used and Refurbished listings to get better prices on things: 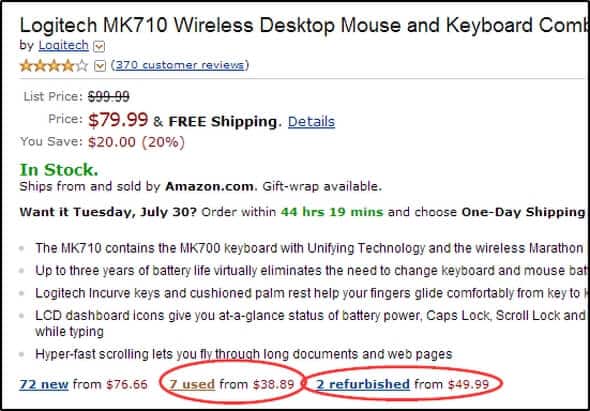 The keyboard and mouse that I purchased cost around $90, but I bought them “used” for $40 (including shipping).

So what was used about them? Nothing except for the box, which was worn and slightly tattered – everything on the inside was in mint condition. 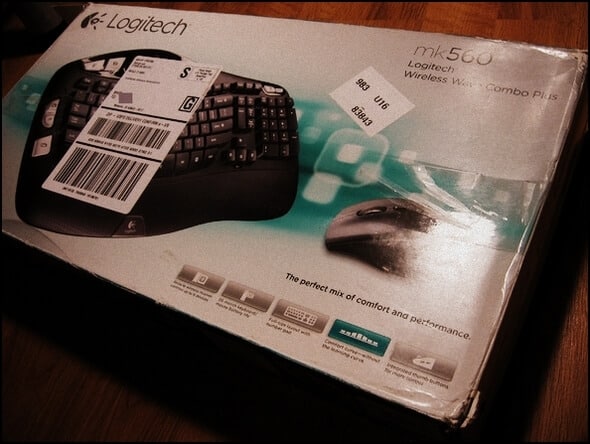 It may take some time to find the right deal versus just buying something quick. But it’s worth taking the time to read reviews and find a good price.

Look At What You Already Have

It’s pretty easy to overlook things that you already have.

Perhaps you have something that needs to be fixed. The old you might have just thrown it away and bought a new one, but how about seeing if you can repair it? Or, if you can’t, can it be altered and repurposed for something else?

Of course, this depends on what “it” is, but you get the picture. It’s all about being open-minded.

You could say that I temporarily repurposed a piece of plywood for my desk. And I would have made it into a shelf, but I turned out not needing it after all. However, I still have it in case I come upon another use for it.

One problem I ran into was the inability to divide up and organize my things. Even though I had drawers to sort out my office supplies from my tech stuff (e.g. cables, batteries, devices), they weren’t enough.

I needed to separate them further in the drawers and that’s when I thought about boxes that I already had from moving, received packages, and even packages of granola bars.

I could have bought some various organizational fixtures online, but instead I reused some boxes, that otherwise would have just been thrown away – that’s what I view to as true recycling. 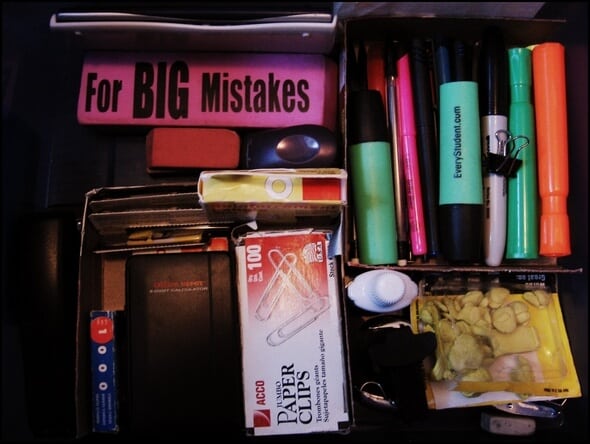 I also repurposed a coat hook as a place to hold my headphones. I don’t take credit for this, as I initially discovered this on Lifehacker years ago.

Another method for this would be to use a coat hanger, as one Lifehacker commenter shared. 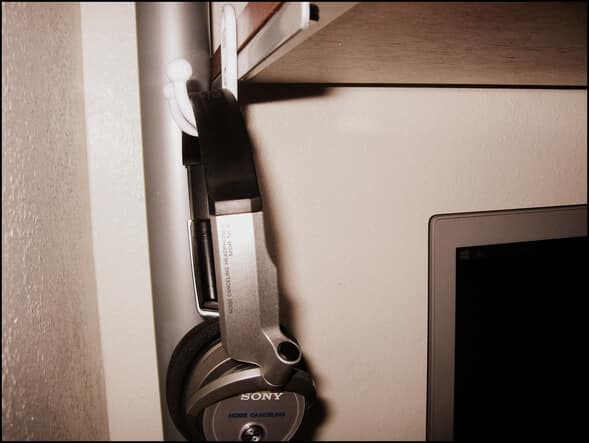 Talk To Family And Friends

Have you told others what you’re trying to do?

They just might have things that they are trying to get rid of to make some extra money or free up space – that’s a win win! You’re helping them and they’re helping you, which is even better than Craigslist because it’s not just a stranger, but someone you know.

When I moved into the house I’m at now, a roommate who had lived there for a while was leaving shortly after I moved in. He had an extra LCD flat-screen monitor that he didn’t have room for. It had a scratch on the screen, but he asked if I wanted it anyways. Of course I wanted it!

So ask around to see what people don’t need. This extends beyond just office things. Maybe your mom doesn’t need her Christmas lights anymore, and you can turn them into kick-ass dorm lighting. Maybe your grandpa has a bunch of lumber lying around you can use to build a hanging loft bed. You never know what you’ll find. 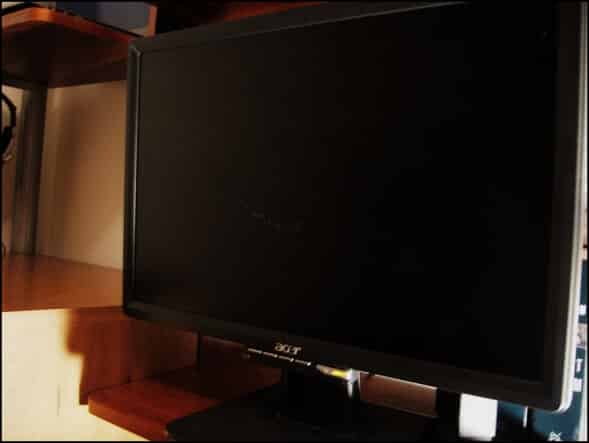 You already have an idea what the end product looks like, as it’s the top image of this article, but below are the photos of both standing and sitting setups. 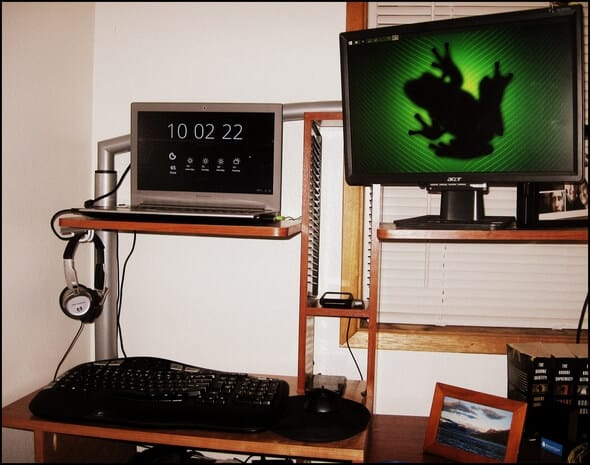 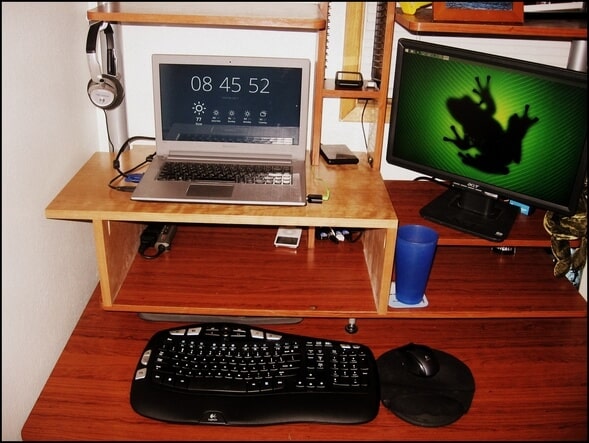 $83.53 – not bad for a complete stand-up/sit down workstation, eh? You might even argue that technically the keyboard and mouse are exempt from that, making the cost only $42.85.

I’m not going to say that some of this was not lucky – I consider myself quite fortunate. However, this hasn’t been the only time I’ve gotten a lot for a little, so I don’t think it’s by chance that I was able to put all of this together.

The phrase “Where there’s a will, there’s a way” comes to mind, and as cliché as it is, it’s true.

If you are struggling for ideas, take a look online for some inspiration. You might start with Tom’s article on building an efficient workstation.

Have you built a workspace of your own for only a fraction of the cost? I’d love to hear about it. And as always, questions and feedback are welcome.