Earlier this year, I made a video that set out to answer a question almost every student faces:

“Should I change answers I’m unsure about on exams, or stick with my initial answer?”

For as long as I can remember, the prevailing wisdom has always been to stick with your initial answer. However, as the research in that video revealed, the opposite was actually true.

This “first-instinct fallacy” – our tendency to put more value on our first answers and even skew our memories in support of them – resulted in more wrong answers overall than the practice of changing an answer when unsure.

So that was then. This is now.

With that groundwork laid, I’d like to proudly announce that my earlier video is now wrong.

The beauty of science is that, at pretty much any time, new data can be discovered that invalidates earlier conclusions.

That is what has happened in the case of this debate on changing answers, and the result is a technique that will help you more accurately judge whether or not to stick with your initial answer on each individual question. It’s called confidence tracking.

Here’s how to use it:

What Does This Technique Do? 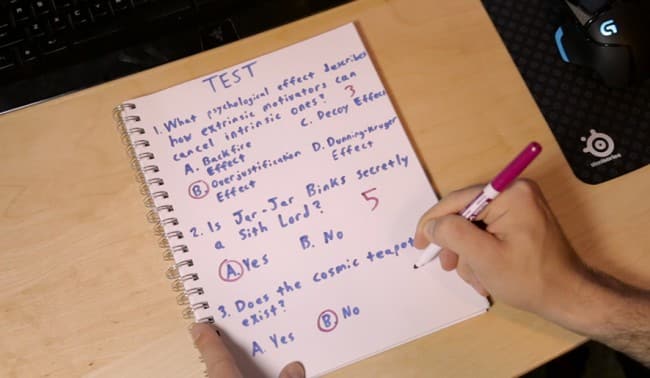 In short, tracking your confidence in the moment is the best way of accurately gauging it.

The “hack” here is that you’re taking advantage of the fact that your brain is very good at judging its level of certainty right after answering a question, and it’s not very good at doing so later on (when most students start reviewing questions and making changes).

The confidence tracking technique takes advantage of metacognition, which essentially “thinking about thinking”. It is our ability to analyze our own beliefs and decisions. To make an analogy, it illustrates how the brain is a “lens that sees its own flaws”.

One of the core aspects of metacognition is our ability to judge our confidence in our knowledge. We can feel uncertain; that is, we know when we do not know.

I started learning about metacognition a few months ago when I interviewed Justin Couchman, an professor or psychology at Albright College (and if you listened to that episode, this article is mainly review for you).

Justin’s first forays into the study of metacognition took the form of research on Rhesus monkeys. In a study he helped conduct called The Highs and Lows of Theoretical Interpretation in Animal-Metacognition Research, he and two other psychology professors set out to see if animals share the same metacognitive capabilities that we have.

In their study, the Rhesus monkeys were given questions of varying levels of difficulty. For each, they either had to provide and answer or indicate that they didn’t know it.

Couchman was surprised to find that the monkeys did, in fact, report when they didn’t know. They had the ability to look into their own minds and judge their level of certainty – much like we do.

This result got him thinking about the metacognitive abilities of his students, who were often surprised when their exam grades turned out far higher or lower than they predicted.

Now, the monkeys aren’t better at metacognition than students are. As it turns out, there’s a reason this happens so often.

The problem with metacognition is that it isn’t perfect. I used the analogy of a “lens that sees its own flaws” for a reason; our brains are subject to all sorts of “bugs” – cognitive biases, heuristics, and flawed modes of thinking.

To quote the AI researcher Eliezer Yudkowsky (whom I borrowed the analogy from):

One of these flaws is that our memories are notoriously unreliable. As a result, our metacognitive abilities decay as we try to use them on thoughts we had further and further in the past.

So, to learn more about this “metacognitive decay”, Couchman decided to conduct another study. In this one, he and his partners had participants take a multiple-choice exam. Their goal was to analyze the effect of tracking answer confidence in the moment, as well as to observe when participants revised answers.

In the first round of the experiment, here’s what happened:

Moving onto a second experiment, Couchman and his colleagues made one change:

Now, these results would seem contradictory – but that’s only the case if we assume there can be only one rule of thumb: “Stick with your gut” or “Always change answers when you’re unsure.”

Instead, there is no universal rule of thumb.

Utilizing confidence tracking gives you a more powerful tool. When you assign a confidence score to a question right after you answer it, you’re utilizing your brain’s metacognitive abilities at their most accurate point, which gives brain a more sensitive tool for making the correct choice.

If you want even more techniques that can help you study better and earn better test grades, you’ll enjoy my free 100+ page book called 10 Steps to Earning Awesome Grades (While Studying Less).

Here are the actual studies I referenced, in case you really want to go off into the weeds:

So here’s the big question: do you plan on using this technique in your future exams?

If you liked this video, here are some of my other ones that relate to tests and exams: