Let’s talk about the ideal sleep schedule for a second.

In a perfect world (as far as your body’s concerned), you’d go to bed when you feel tired, and you’d wake up naturally without needing an alarm.

You’d let your sleep schedule be dictated by your body’s two sleep regulation systems: sleep-wake homeostasis, which acts like a sort of internal timer that generates an increasing drive to sleep as more and more time passes, and the circadian clock, which syncs your body’s biological processes to the day/night cycle.

And you wouldn’t mess with those systems by doing dumb stuff like:

Living like that, you’d most likely get excellent sleep, and you’d feel well-rested and energetic every morning. You’d be ready to take on your morning routine like a champ.

Unfortunately, civilization has a way of taking your body’s version of a perfect world and thoroughly stomping all over it.  Our working lives are constantly being diced up and scheduled into rigid time blocks by classes and jobs – and the schedules usually start pretty early.

When we finally escape the schedule late in the day, we naturally want to spend the precious few hours that remain on actual fun stuff. There are so many books to read, video games to play, trampolines to jump on, and friends to go get pizza at midnight with.

Oh, and what’s the lurking over there in the corner? A box full of infinite knowledge and cat videos, you say? Well, maybe I’ll just have a quick look…

Put simply, modern life makes it pretty tough for most of us to operate without some sort of pre-planned wake-up time. Everything else operates on a timetable, so sleep has to be penciled in as well.

The problems start when people pencil in their wake-up times… and fail to do the same for the time they’ll go to sleep. Many of us just go to sleep when we feel tired, and in the modern world, this really doesn’t work all that well.

To explain why it doesn’t work, we’re going to have to delve into the deep, dark caverns of science. (Don’t worry, we’ve got an escape rope and should be out of here quickly enough – I think) 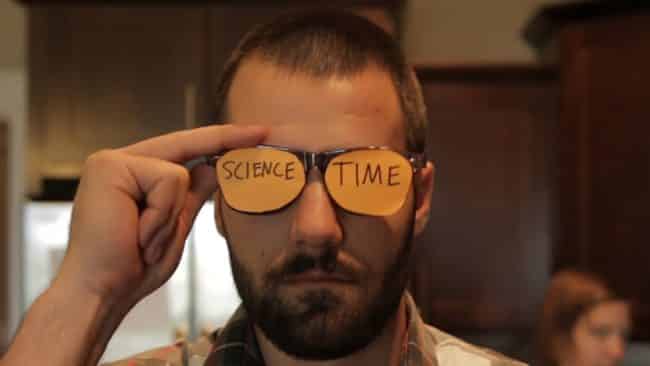 First, here’s a bit more detail about how your circadian clock works. This mechanism is controlled by a region in the brain called the suprachaismatic nucleus, which responds primarily to light levels detected by photosensitive ganglion cells in your eyes.

You heard it here first, folks: There’s a gang of lions living in your eyes.

Being serious, though, this is why artificial light can be a problem. The circadian clock, along with all its associated biological hardware, evolved to sync your body’s processes with the rising and setting of the sun – which was the only major light source humans were ever exposed to for the majority of our species’ existence, other than fire.

The light that fire creates, though, is predominantly red and orange. Sunlight, by contrast, is strong across the entire color spectrum – which is important. As it turns out, the short wavelengths of blue light have a large effect on our circadian rhythm. To quote Mark Sisson’s in-depth article on how light affects sleep:

The sun gives us plenty of exposure to blue light, but guess what else does? Light bulbs and – to an even higher degree – screens. The New York Times writer Kate Galbraith reported:

“Devices such as smartphones and tablets are often illuminated by light-emitting diodes, or LEDs, that tend to emit more blue light than incandescent products.”

So, to put it in oversimplified terms, our brains interpret the artificial light from the screens we spend so much time staring at as, essentially, sunlight. As a result, we don’t get tired when we should.

Consequently, we go to bed later than we naturally would. Now, we can get into the implications of this later on for people who get up whenever they want – but for those of us with alarm clocks and planned wake-up times, the problem is clear. We don’t get enough sleep.

How Much Sleep Should We Get?

The great philosopher 50 Cent once said:

“Sleep is for those people who are broke.”

His words echo those of another rich guy, Thomas Edison, who once grumbled:

“Sleep is a criminal waste of time, inherited from our cave days.”

…and that’s why you shouldn’t get your health advice from dead industrialists or dudes who kill it in the rap game. Getting adequate sleep is important; sleep helps with memory consolidation, flushes toxins out of the brain, rebuilds muscle, and so much more.

Everyone has individual sleep needs, but we can use a couple pieces of information to establish some basic guidelines. First, the National Sleep Foundation has published average sleep recommendations for different age ranges (I’m only listing those for this site’s main audience here; click that link if you’re a toddler or over 65):

Secondly, let’s consider the sleep cycle. This is the cycle of different stages of brain activity you go through as you sleep. In simplified terms, the sleep cycle goes like so:

On average, each iteration of the sleep cycle takes about 90 minutes. In a natural setting without an alarm clock, your body would wake up at the end of one of these sleep cycles (which aren’t identical, by the way – later ones spend more time in the REM stage, which is one reason why extreme polyphasic sleep regimens are a bad idea).

If your body does happen to wake up in the middle of a sleep cycle – due to a coyote attacking you in the middle of the night, a drill instructor dumping a bucket of water on you, or your alarm clock going off (the most likely scenario) – you’re going to feel like a truck hit you.

You Need a Well-Planned Bedtime

Knowing what we know about sleep cycles, the optimal strategy is to time your sleep so that your alarm wakes you up at the end of a cycle. To make this really easy, you can use sleepyti.me to input your wake-up time and get a range of times you should aim to fall asleep by.

Keep in mind that the average person takes 14 minutes to fall asleep, so plan accordingly. If you have to wake up at 6:00 A.M. and you’re 22, then the time you should go to bed would be either:

Again, remember that your individual sleep needs may differ from these guidelines, so you may need to test out different times to figure out the best one for you. Regardless, once you’ve figured out what it is, set that time as you bedtime and stick to it.

Of course, when you’re in college or out in the real world, your mom isn’t there to yell at you. You have to have the self-discipline to go to bed on time – and that can be hard.

Let’s discuss a practice you can adopt that will make getting yourself much, much easier.

A wind-down ritual is the term I like to use for a simple sequence of activities designed to:

Just as a morning routine can help you build some productive momentum for the day’s real work, a wind-down ritual helps you calm down so you can rest more easily.

Many people have their own particular wind-down rituals, and yours can be as simple or complicated as you’d like. Here are a few ideas for things you could build into your ritual:

Regardless of the activities that you choose to include in your ritual, I think there are a few specific things you can do to more effectively turn it into a habit.

First, set an alarm for it. Create a daily, recurring alarm on your phone or watch that goes off 45 minutes or an hour before your bedtime and tells you to start winding down. By having an alarm,  you’re less likely to get sucked into a game or TV show and push off your bedtime.

Second, remember that you’re trying to build a habit of adhering to this ritual – so treat it like any other positive habit you’re trying to adopt. There are many things you can do to increase the likelihood you’ll stick with a new habit – some of which I discussed in my video on The Power of Habit – but one of the most useful is tracking your progress. Remember:

“What gets measured gets managed.” – Peter Drucker

Building a record of your successes and (hopefully few) failures will help you stick to the ritual more consistently. So use a tool like Habitica or Coach.me to track your progress – or maybe even use something like a journal to note down the time at which you start your ritual each night, and when you go to bed.

Third, I think the start of your wind-down ritual should also mark the end of your internet browsing for the day. For me, the internet is the most distracting thing that exists, so I do my best to simply turn off my computer once I’m ready to start winding down. If you can’t turn off your computer for some reason, at least block access to distracting sites with an extension like StayFocusd. You could also reduce the temptation to mess with your phone by starting a Forest session.

Remind Yourself of the Benefits

The last tip I want to mention here comes from Gretchen Rubin, the author of The Happiness Project and Better than Before. Gretchen was a previous guest on my podcast, and she also wrote an article on how to go to bed on time. I really liked her 5th tip, which is:

“Remind yourself how great it feels to wake up naturally, before the alarm goes off, without that sickening jolt into wakefulness. Then, when you’re surfing the internet at 11:30 p.m., ask yourself, “Am I making a good trade-off?””

By deliberately pausing and doing the cost-benefit analysis, you counteract your brain’s primitive instinct to discount the value of the later reward (waking up well-rested) in favor of the immediate reward (one more episode of Justice League) – even though the latter is less valuable than the former.

Hopefully you found these tips useful! In a future video, I’ll cover strategies for increasing the quality of your sleep, including ways to fall asleep faster.