Note: I’ve written this article with a college focus, but it’s relevant to anyone who wants to help people but isn’t quite getting the attention of the people they want to help. Read on, do-gooders!

I mean, if I wasn’t the kind of guy that crushes man’s head between thighs like sparrow’s egg, I might even cry a bit.

All throughout the school year, all over campus, I see tables set up. Tables manned by well-meaning, yet bored-looking students representing groups and clubs of all different kinds.

What do these people want? That’s easy. They want to help.

“I just want to help people.”

The first thing I always notice about a student manning a booth in a hallway or sidewalk isn’t the sign. It isn’t the free swag they’re giving away. It isn’t the cheeto stains on their shirt.

It’s the fact that, most of the time, they’re sitting there alone, not helping anyone.

Why Nobody Wants Your Help

So say you’re part of a club. You’re a passionate member, and you just know your club could make the lives of students easier and better. Maybe it’s even the student government, in which case you feel like your niche is every student.

You’ve got a big sign up saying, “Ask me anything.”

Or, “Give us your ideas to improve the school.”

Why are you sitting there alone? Why isn’t anyone coming up to ask a question?

I’m going to get to the answer in just a second. But first, let’s do a thought experiment where I’ll put myself in your shoes.

Say you’re walking to your history class, which is across campus. You’ve got a few things on your mind:

Ok, maybe that’s not exactly what you’re thinking right now (full disclosure: it’s not what I’m thinking either – I AM eating a bagel), but it’s safe to say you’ve got a few things occupying the stage in your mind.

Anyway, you’re walking down a sidewalk when you see me, with my chiseled face and body of a Greek god, manning a table. Maybe I’m staring blank-faced at each passing student (just kidding; I always smile and when I do I’m cuter than Ryan Gosling).

Or maybe I’m actively asking people to come over and talk to me.

Doesn’t matter, because I’ve got this kick-ass sign up that reads:

“What Changes Would You Like to See at ISU?”

It’s great. It’s got an awesome font (Bleeding Cowboys of course), card stock poster board, and I even pasted a picture of the Nyan Cat on there so everyone knows I’m a chill guy and not a part of the bureaucracy.

Unfortunately… I’m alone. And you know exactly why.

It’s because the only thing that goes through your mind when you see me and my sign is: 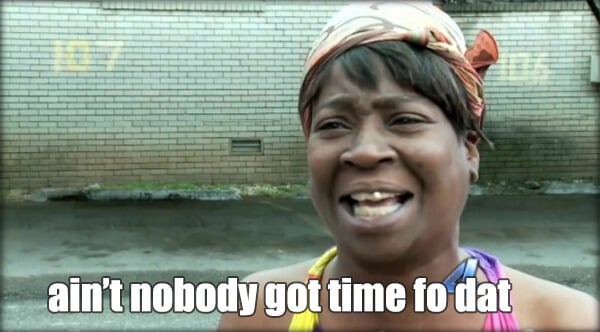 And that’s the end of that.

So disappointing. So shameful. I shall fall on my sword now.

So What Went Wrong?

Remember the things I listed before – the things going through your mind?

Not one of them had anything to with how the school could be improved.

And yet, here I am, asking you to pull feedback out of thin air. And I’m asking you to do it while you’re busily hurrying to class.

It’s the same thing as me saying, “Hey dude, if there’s ever anything I can do to help you out, let me know.”

I mean well, but I’ve just put the burden of figuring out what I can do on you. I’ve suddenly created work for you.

Derek Halpern talked about this mistake in his recent post, How to Persuade People You Don’t Know to Help You. It’s actually something a lot of newbie bloggers do when reaching out to more established writers in hopes of building a relationship.

While it’s nice, and I’m sure they genuinely want to help instead of just expecting a handout, their offers are usually ignored.

Still, you know people have issues they want to get fixed. And you’re completely right.

Every student has had a time where they’re pissed at something the school is doing badly. Everyone has something they want – a change to a policy, a new class that should be added, an improvement to the food in the dining center, whatever.

But they’re not always thinking about it.

How to Get People to Accept Your Help

Let’s go back to the thought experiment where I’m the guy sitting at the table and you’re the shmuck walking by.

“Which of These 3 Things About ISU Sucks the Most?”

Oooooh shit. Now I’ve gone and done it. I just threw down the gauntlet. Hell, the administration’s probably trying to find an excuse to expel me right now. But moreover:

You’re much more likely to come over and give your feedback if I’m using this strategy, rather than just asking you to pull general feedback about anything out of your ass on the spot.

Now, check this out homie:

At the bottom of the survey, after the three questions, I’ve got a box. And that box asks:

“If there’s anything else that you think sucks, write it here and we’ll fix it.“

Same question as before (“What changes would you like to see at ISU?”) – but now it works better.

That’s because I’ve just jogged your memory by giving you a specific question first. I eased you into thinking about what sucks about the school with an irresistible hook, and now I’m asking for custom feedback.


Instead of being the normal tool at the bar who walks up and asks a girl “How’s it going?”, he’d always open with an interesting hook or a specific question. This is an opener that most in-demand women won’t expect, but it’s also just interesting.

Now, I’m not saying that being a player and picking up hundreds of women is necessarily a good thing to do, but the technique is golden. Be specific.

Want it to be even more effective? Offer an incentive.

What I’ll say here is that each of them are effective. For college students who are usually broke, economic incentives are usually the most obvious choice. Offer to enter them in a contest to win an iPod touch or something.

Another type of incentive might be more effective, though. Analyze your audience and find out what makes them tick.

The bottom line, though, is that you must get them thinking about the issue first.

And you do that by being specific.

You do it by giving them choices instead of creating work for them by asking them to think things up themselves.

You create a hook that brings them in. Something interesting that catches the eye. I do this with my post titles – like 5 Things You Can Do Today to Make Yourself 2 Billion Percent More Hireable – you want to know what actions could possibly push a non-quantifiable quality up an infathomable number of percentage points. It’s interesting at first. Only then is it insanely useful.

Lastly, you ask them to take action. Help me help you.

Now It’s Up to You

After reading this, you should have the knowledge and tactics. Now it’s time for you to apply them to your own situation and figure out how to engage your audience. Get moving!

I’ll lead it off by putting my own advice into action here:

I want anyone who is trying to help others – student leaders, bloggers, entrepreneurs – to see this post and learn how to get the attention of their audience effectively.

Do you have a friend who is part of a club and doing outreach, or is starting a business – but can’t seem to catch people’s interest? Share this post with them so they can learn these strategies as well. You might save them a lot of wasted effort.