As early as fifth grade, my teachers were saying things like, “College professors won’t let you turn in work like this!”

People start asking us what we want to be when we grow up when we’re four, like we’re supposed to know.

When middle school hits, they’re already asking us about colleges, majors, and classes.

And by high school, there’s a lot of pressure to start taking on as many extracurriculars, AP level classes, and volunteer work as we can. Anything and everything to make us look good to a future university.

The problem is…college isn’t for everyone. Sometimes, it’s tricky to know whether or not you should even go.

If you’re sitting there wondering whether or not college is right for you, there are four big questions you should be asking yourself.

Knowing what you want in life is hard, especially if you’re in your teens or twenties and haven’t had many experiences yet. When I was looking at colleges, I thought I wanted to be a graphic designer or a teacher…and, well, that didn’t work out the way I expected at all.

One friend of mine went to college for marine biology and spent two years studying turtles before she decided she wasn’t interested. She switched to a medical degree, and then to physiotherapy. She’s still not sure what she wants to do, and she’s incredibly behind on completing her degree and saddled with student debt.

There’s nothing wrong with switching majors. Many people choose to do it simply because college offers a lot of exposure to things they didn’t even know they liked in the first place. If you have the money to experiment and take a variety of classes until you figure out your major, then sure, do that.

But, if you’re like the vast majority of people who need to take out loans, you shouldn’t go to college to find yourself. You’ve got the whole wide world out there for that, and it won’t put you into a pile of debt.

The Alternative: Take a Gap Year

“For many students, a gap year is about crystallising their decision-making; developing self-directed and self-regulation skills, broadening their competencies and self-organisation and perhaps their confidence.”

– Andrew J. Martin, published in the Journal of Higher Education

If you’re not sure what you want to do or what you want to study, it might be good to take a gap year. It never hurts to wait a little. You can use your time (and money!) to do all kinds of exciting things like:

You don’t need a college degree to be an extra in a short film, start a YouTube channel, or do seasonal work at a local farm. These are experiences you won’t regret. They might even help you figure out what you like to do so you can be more informed about your future major.

Another study revealed that students who took a gap year are more successful than mature students who went back to school, or their peers who went into university straight from high school.

2. Are You Going Just Because Others Expect You To?

For me, this was one of the biggest reasons why I even thought I had to go to college. Everyone else was. It wasn’t even a question.

According to research conducted by Degree Query, 30% of students worldwide go to a four-year university because they think it’s what they’re supposed to do after high school.

We’re told from a young age that college is the path to success. Get a degree. Get a job. Be wildly successful. Right? For some people, it’s almost a rite of passage to adulthood. Their parents want them to go, or their grandparents do, or they want to go because their friends are or their significant other is.

When I was in school, it was mandatory that we had a line-up of college choices, knew what major we were going into, and were applying for scholarships. Our counselors checked in on us every single week.

The thing is, college is a four-year (or longer!) and multi-thousand dollar commitment. You shouldn’t go just because someone else is pressuring you to.

“Just because you should” isn’t a good reason anymore. A college degree does not always result in a job. Consumer Reports asked a number of alumni whether or not they thought they had made the right decision in going to school, and 45% said college wasn’t worth the debt. The same study found that almost half of college grads are underemployed.

The Alternative: A 2-Year Degree at Community College

If you still feel uncomfortable with the idea of not going to college, consider taking classes at your local community college first. Many offer associate’s degrees that will at least partially transfer to your future college of choice. You can get the same credits for less money and less commitment. And, you can explore what classes and subjects you’re actually interested in with relatively little risk.

If you’re certain you want to go to a university after that, then you have a lot of your work already done for you and you’ve saved money by going after cheaper credits and books first.

If you don’t continue, then you still have an associate’s, and that’s worth something. According to the U.S. Bureau of Labor, holders of associate’s degrees make on average $832 per week. GED holders only made $730. They also had a much higher rate of employment than those who only finished high school. 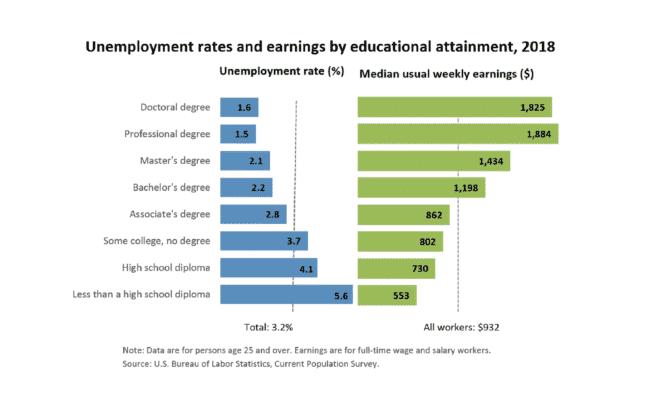 I found, at the end of my time at community college, that it wasn’t necessary to continue. Because of the laid-back environment at school, I had the time to do teacher’s assistant work, work as a dishwasher, and manage a burger joint on the weekends. In addition, I also had the time to teach myself how to mod video games and edit photos/videos.

After school ended, I launched my own business. I learned so much, and all of it was real-life experience. Sure, I don’t have a four-year degree, but I don’t feel like I need one.

3. Do You Like School Enough to Go Through Four More Years of It?

Four years is a long time.

Not everyone is put together to sit in lectures, write papers, and become a lawyer, computer scientist, or marine biologist. And that’s okay. It doesn’t make you less intelligent or useful. It just means you’re put together differently.

Right now, skilled trade work is in high demand and it pays well. If you hate sitting in a classroom for hours on end, you might want to look into getting vocational training. There are tons of cool options.

These are skills that can lead to well-paying, in-demand jobs. Plus, it’s much less expensive to go to a trade school. The overall average cost of vocational school in the United States is about $33,000.

Although that may seem expensive at face value, the average total cost of a bachelor’s degree at a public university is over $100,000 (when you factor in expenses like room and board). That’s a huge difference!

If you need help paying for school, you might qualify for a career trade loan, making this an even better option. In many careers, you might even get paid to learn on-the-job, which is way better than going into debt for a degree.

4. Are You Willing to Put Your Life on Hold?

While there’s a lot of growing, maturing, and studying to be had at college, it’s still just an extension of your academic life. You won’t be getting on with a career, you won’t have a lot of free time to explore your hobbies, and you might even be living in a dorm where there are a lot of rules about what you can and can’t do with your space and your time.

For some people, this works as a great transition from being a teenager to being an adult.

For others, though, it just slows them down.

Real-life experience is incredibly valuable. In fact, one survey of American employers showed that most managers still consider internships, employment during college, and volunteer experience more important than GPA or relevant coursework when evaluating a candidate’s readiness for a job.

The Alternative: Start a Business or Become an Intern

There are so many ways to jump-start your life and your career. One great option is to start a business of your own. While you’re young, you have few assets and tons of time. That means you don’t have a lot to lose, so now is the perfect time to launch that website, build that app, or start freelancing.

If that doesn’t interest you, why not get an internship? Some programs even allow you to intern abroad. If you can’t find one in your area, you can still probably find work on a more part-time basis or volunteer in order to gain valuable, practical experience.

In the end, whether or not you go to college is up to you. Nobody should, or can, make this choice for you. Take your time, look at the data, evaluate your current situation, and maybe use Thomas’ Tony Hawk method to figure out if college is right for you in this moment.

You can also check out our podcast episode about some awesome alternatives to college if you’re interested.

It takes a lot of courage to swim upstream and choose to do something different. It’s also totally okay to go the mainstream route as long as:

Just remember that, while this decision can seem overwhelming now, it’s not the biggest decision you’ll ever make in your life. Even if you make a mistake, it won’t be the end of the world.