How would Batman deal with his email inbox?

Well, knowing how paranoid Batman is, he probably wouldn’t use normal email at all – he’d figure out how to code some form a ultra-encrypted email that’s unhackable and can detect the DNA of any villain accessing it.

If Batman was careless enough to use normal email, however, he’d probably adopt the same mindset he applies to his utility belt and use a suite of tricked-out apps and extensions to make his email processing time more productive.

After all, that Bat-viagra spam isn’t going to delete itself.

I won’t pretend to know exactly what Batman would use to keep his inbox clear, but I do know of a good number of apps you and I can use. In this article, I’ll go through them.

When it comes to email, my goals are:

Hopefully you share these goals, because digging through an full inbox sucks.

Here are 13 apps and extensions that’ll help you tame that inbox and achieve those goals.

Note: Most (though not all) of these are for Gmail, which is the client I use.

If your goal is Inbox Zero, then you’ve probably had this thought before:

“I want to respond to this email – but I really don’t want the other person to get back to me until next week.”

Boomerang for Gmail solves this problem for you. It’s got two awesome features:

Using Boomerang, you can easily batch process your inbox at one time, but have control over when everything goes out. 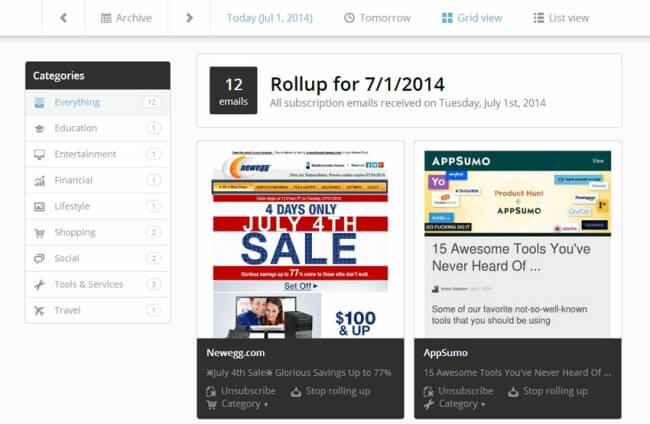 Before I found Unroll.me, every morning was an exercise in deleting a ton of emails.

Now, I rarely get junk email or newsletters, unless they’re from someone I specifically want to follow (for example, I always read emails from people like Jenny Blake and Ramit Sethi).

My inbox is now a place of communication that I mostly want to have – rather than a giant target for department store newsletters and other crap. That’s why I think Unroll.me is essential for anyone who gets a lot of email.

Unroll.me scans your inbox and finds all emails that appear to be subscription-type newsletters. Then, it lets you “roll up” all the ones you want – but don’t always want to see – into a simple, daily digest email.

Even better – the app lets you unsubscribe from everything you don’t want with just one click. 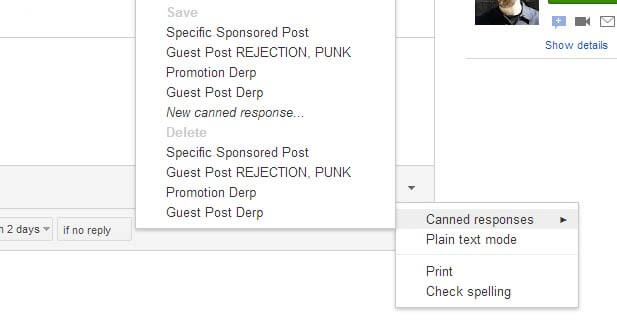 If you’re still a student, you might not have this problem yet – but I have to write the same thing in emails all the time.

When I get reader emails, I always respond personally and tailor my response to the question; however, there are other types of emails I don’t care to spend time responding personally to:

Gmail’s Canned Responses feature lets me answer these types of emails within seconds. It’s a Gmail Labs feature, so you’ll need to go to Settings -> Labs and enable it.

Honestly, I’ve been using the Snippets feature in Alfred (probably the best OS X productivity app ever) in lieu of Canned Responses for a while now – but it’s part of the Power Pack, which costs money. If you just want text snippets, Canned Responses is perfect and free.

Work expands to fill the time allotted for it.

You probably know this well; when you’ve got a ton of time to write a paper, you probably get distracted. But when you’ve only got an hour left? Your fingers become a blur.

That’s the thinking behind The Email Game. Once you sign in, the app grabs the emails in your inbox and gives you a time limit for answering each one.

You’ll also see a bar in the top left corner letting you know how many emails you’ve got left to answer, as well as a smiley/sad face that shows how well you’re doing.

Pro-tip: Since you’ll be answering emails really quickly, you may want to put a note in your signature letting people know. When I was emailing back and forth with one of the Lift team members, I noticed her signature:

Once I saw that, I completely understood. 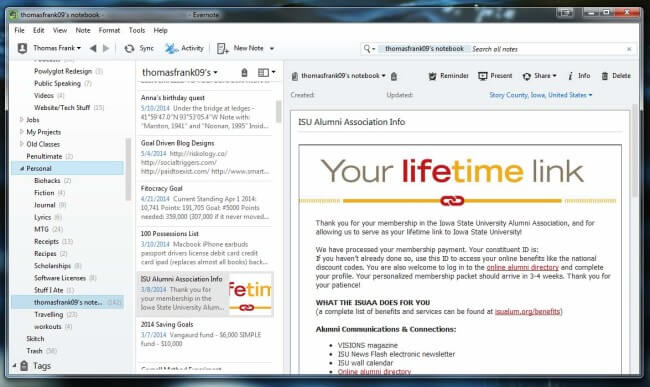 The next three apps on this list are all focused on getting stuff out of your inbox.

One of the reasons I used to leave emails sitting in my inbox is because they contained information or tasks that I didn’t want to let slip from my mind. This isn’t the purpose of an email inbox.

So the first tool that helps me combat this habit is Evernote, which I often call my second brain.

Evernote is super useful for acing your classes, but its functionality goes so much further. I’ve got notebooks for every major area of my life, and I shove pretty much anything and everything I want to remember into them:

If I let all this stuff sit in my inbox, my huge email count would demotivate me. I wouldn’t feel like answering the emails that need answering.

With everything stashed neatly in Evernote, my head is clear. 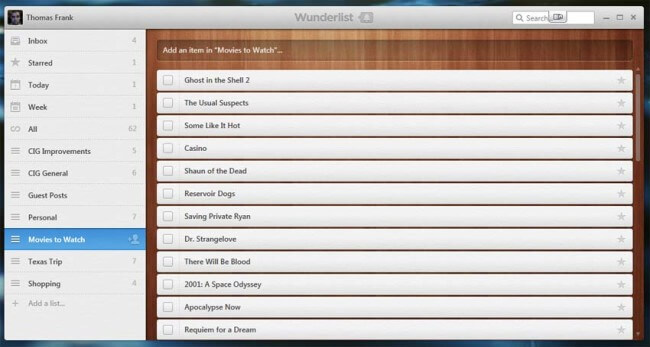 Our second stop on the “Get That Crap Out of Your Inbox” tour is Wunderlist, which is still my favorite computer-based task manager.

These days, I actually keep most of my tasks on a big-ass whiteboard, which is mounted right next to my sticky note-based blog post calendar. Yeah, I know. I’ve gone old school on you guys.

Exception: Big projects get their own boards in Trello, which has become my favorite app for group collaboration. Without Trello, the CIG redesign probably would have taken a lot longer.

For me, using physical methods of tracking my tasks keeps them in the front of my mind better. If you want a computer-based method, though, Wunderlist is awesome.

Either way, you need to extract to-do’s and deliverables from your emails, get them into a task management system, and archive those emails.

Last stop on our tour, yo!

One thing I don’t really like using Evernote for is bookmarking things. While it has the Web Clipper, I generally don’t like clipping entire articles into Evernote. Furthermore, the Clipper is a bit slower than I’d like.

Due to this, I began searching for a great bookmark manager that could save all the cool articles and tools that I learn about through my email (and simply through browsing).

Up until this week, I had been using Pinboard, which is a well-loved, minimalist bookmark manager that costs around $10 to set up and promises no ads, ever. I really like it. However…

Today I saw a tweet from Belle Beth Cooper, the co-found of Exist:

Just found what I’ve been looking for for years: a todo list for links https://t.co/cChm4QR9AK

…and I was instantly in love. Unmark.it has an absolutely beautiful interface, a simple bookmarklet that lets me save a page in seconds, and acts like a task manager for my bookmarks.

Now, I can manage the articles I mean to read just like my to-do’s – and get them out of my inbox instantly. 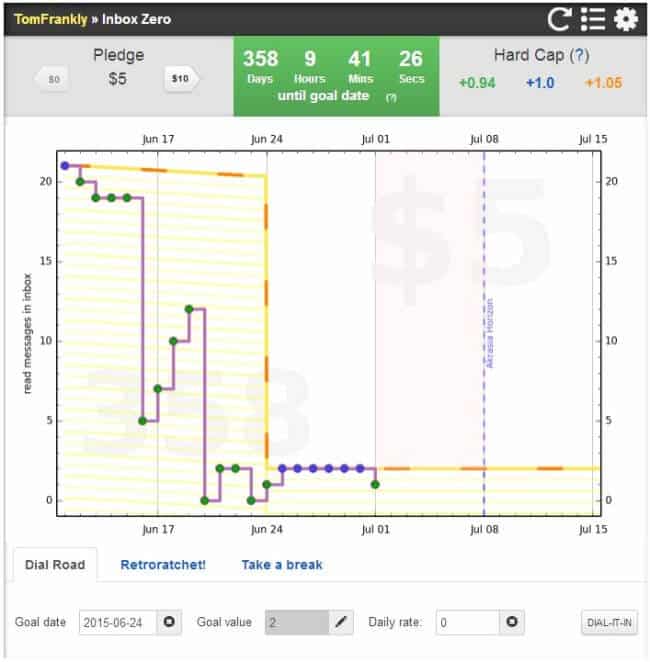 This one’s the game changer – and not just for email, either. However, I’ll extol Beeminder’s usefulness for other goals (like writing blog posts) later and focus now on how it helps me keep my inbox in check.

Simply put, Beeminder is goal tracking with a sting. When you track goals in Beeminder, you pledge real money that will disappear from your bank account if you slack off too much.

Beeminder works with lots of different apps, and it has an integration called Gmail Zero that helps you keep the number of read messages in your inbox down. Here’s how you get started:

By default, Beeminder gives you an entire year to get down to your goal number – I used the Dial Road feature to trim that down to a week.

Once I did that, I had massive amounts of motivation to clear out my inbox – I don’t want to ever spend money on a failure due to laziness. Now, I simply keep my read count to 2 or less, as you can see on my graph.

I’m not kidding – this app is the best thing to ever happen to my inbox. It’s radically decreased the stress I used to get from email. 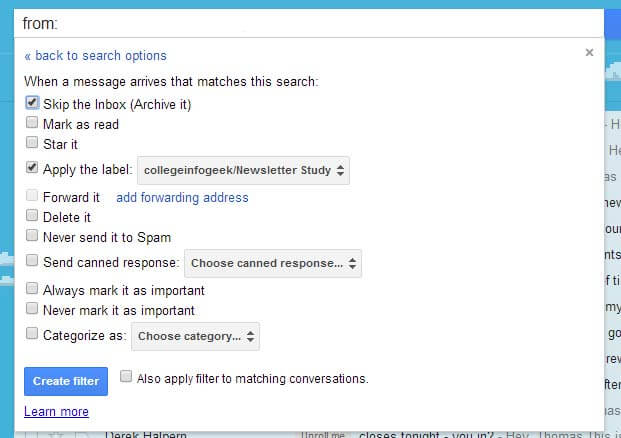 Ok, yeah. I know. “Gmail filters” aren’t an app or an extension – but they are something I want to mention. I don’t think people use them enough.

You actually have a lot of control over what happens to certain types of emails when they arrive. While it might take 30 seconds, try creating a filter next time you get an email from a source that sends you stuff frequently.

Things I usually create filters for:

I’m still working on perfecting my use of filters, but the ones I do have already have been really helpful. 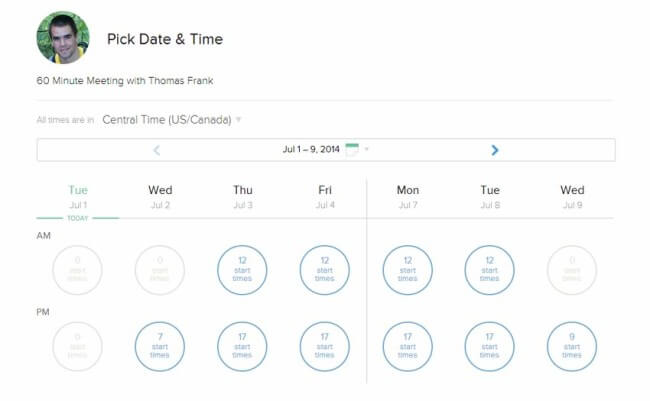 Setting up meetings through email is often an pretty tedious process:

“Send me some times you’re free and we’ll set something up.”

“Ah, nope – I have to go to my sumo wrestling lessons then.”

My friends over at Listen Money Matters recently pointed me to Calendly, which is an awesome app for scheduling meetings.

Calendly lets you set up times during the week that you’re free, as well as specific types of meetings that you’d like to offer people. All they have to do is visit your profile and pick a time.

After that, an email confirmation goes out to both of you! 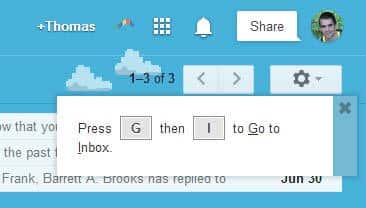 Did you know that Gmail has a ton of keyboard shortcuts built-in? Yep – in fact, you can use pretty much every Gmail feature without taking your hands off the keyboard.

However, learning all those shortcuts takes time, and you probably don’t want to refer to a cheat sheet every time you want to open an email and reply to it.

Keyrocket for Gmail solves that problem that automating the training process. Once it’s installed, it’ll show you the keyboard shortcut for each action you take in Gmail.

After a while, you’ll start to remember the shortcuts you use most – which will cut down on the time you spend processing your email. 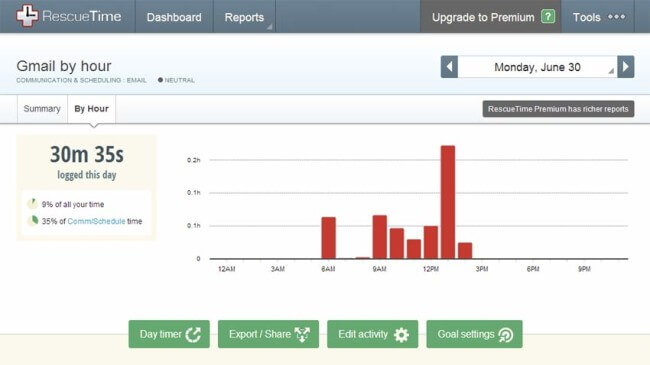 Peter Drucker – one of the greatest managers of all time – once said:

There’s a ton of truth to this statement. If you want to make a change in your life, you’ll be a lot more likely to succeed if you can first see exactly what your current habits are – and be able to track your progress.

RescueTime is an awesome app for this purpose. This tool tracks the time you spent on different websites, and then gives you reports on how you spend your time.

After using it for some time, you’ll start to see just how much time you spend working on your email – and at what times during the day.

Looking at my graph from June 30 above, I can see that I’m checking email far too many times during the day. This probably means that I’m not spending a whole lot of focused, uninterrupted time on working.

Now that I know what my habits are, I have the motivation and the data to improve upon them.

If there’s some sort of integration between two apps that you want to create, IFTTT can probably do it for you.

IFTTT is a service that hooks into the APIs of other web services and lets you create Recipes – integrations – between them.

Here are a few you could do with Gmail:

There are lots of others – just search “Gmail” on the Recipes page to see them all.

That’s it for now! If you found this article useful, you might like this one as well:

To close this sucker out, I’ll ask you one simple question:

What’s your best tip for dealing with your email productively?