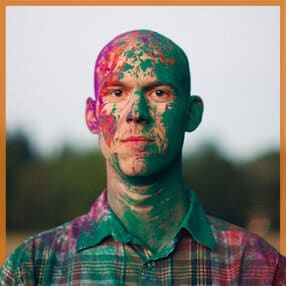 A couple years ago, I got involved with this thing called The Million Dollar Blog Project.

Started by Corbett Barr (one of my personal heroes), the project was an attempt to help starting bloggers post their progress, keep each other accountable, and collectively make one million dollars through online entrepreneurship.

Now, not to toot my own horn or anything, but soon after signing up, I was able to drive College Info Geek to the top of the leaderboard. As of this writing, it’s still holding one of the top three spots. (Since it’s based on traffic stats, I guess I have you guys to thank for that!)

Anyway, there was this other blog that was always just about neck-and-neck with mine on the leaderboard. That blog is Expert Enough, and it’s actually a side project ran by Corbett himself.

When I started reading it, however, I noticed he wasn’t the only one managing the blog. There was this other dude named Caleb Wojcik (rhymes with logic).

I read a few of Caleb’s articles, which were all pretty darn good. I soon discovered that he also helped Corbett run his main blog, ThinkTraffic. I thought to myself, “Alright, this guy’s a pretty good blogger.”

Then I found out that he’s got his own blog called Pocket Changed, which focuses on finance, personal development, and entrepreneurship. Aside from great content, Pocket Changed has a fantastic design as well. “Ok, he’s a pretty good designer and WordPress nerd as well.”

Some months ago, he launched a podcast on his blog and has been interviewing some pretty big names on it. “Damn, he’s a good podcaster and networker to boot.”

But here’s the kicker. Recently I saw my friend Pat Flynn post a video trailer for his new book Let Go:

As you can see, the trailer’s cinematography is fantastic – and guess who’s name I saw credited for it? That’s right – Caleb Wojcik.

At this point I was like, “Holy crap – how can one guy have so many different skills?”

He’s also my guest on today’s podcast, and skill acquisition is one of the primary things we talk about in the interview. I believe having a diverse set of skills is important for keeping yourself flexible in today’s workplace, and Caleb agrees.

In this episode, Caleb and I talk about how you can go about building a skillset that adapts to a variety of very different tasks. We also dive in to Caleb’s story – from his college years, to his experience working at Boeing, to his current adventures as a rogue entrepreneur.

Strap on your kick-ass headphones and dive right in.

If you enjoyed this interview, leave a review of the CIG podcast on iTunes! I’ll love you forever, or at least for the next 10^100 years until Hawking radiation evaporates the last black hole and renders the universe a black expanse of nothingness!

Oh, and one last thing: Caleb actually interviewed me for his own podcast some weeks before we recorded this interview. However, we thought it would be fun to publish them on the same day. If you’re interested in hearing that interview, check it out here!