Should you ever skip a class?

You’re probably expecting me to say, “Always go to class you dingus,” because I’m old and have a beard and could have been a teacher at this point if I’d majored in something differently.

But if I was going to say that, this video would be five seconds long and wouldn’t even be worth clicking on. Instead, let’s look at this objectively.

College classes are a different question, because in college, you’re:

Let’s say you’re at a university that charges a flat rate per semester, instead of by credit hour. That’s how my university worked, at least. If yours does charge by credit hour, this is even easier.

Say you’re taking the normal 15 credits, so that’s five 3-credit classes that each meet three times a week for a 16-week semester. And let’s say that semester’s tuition is $4,000, which is about what my university is currently charging for in-state students (out-of-state students: I feel for you. I really do.) Breaking that down:

So, using that simple math, skipping a class means you’re throwing away almost $17. Of course, that number is almost certainly not accurate. We’ve got other factors to consider.

For instance, you’re most likely not paying your tuition up front; instead, you’ve probably got student loans. What if you’re funding your tuition completely through a 6.8% loan? If we assume you take 10 years to pay off that $4,000 using minimum payments, you’re paying $1,343 in interest. That equates to an extra $5.60 thrown away for every class you skip.

Ok, so that’s the straight math. It breaks down when we consider some other things, however.

Number one, obviously not every class is created equal. If you skip the day that professor gives a test or covers vital information for the final exam, you’re hurting yourself a lot more than if you skip a day when nothing much important is covered. So timing affects the outcome.

The REAL question, though, is: What exactly are you buying with those tuition dollars? The value isn’t the time in class, it’s:

Our main focus should be on the value of each class as it applies to your earning potential in the future, because make no mistake: College is a business decision. It is an investment.

You are choosing to pay a lot of money in order to sit in classes and take tests. You’re also choosing to sacrifice several years in which you could have worked and made money; this is called an opportunity cost.

The resulting increase in income once you graduate needs to eventually outpace what you would have made otherwise in order to be considered a positive ROI, financially speaking.

Of course, you go to college for other reasons as well – learning, new experiences, etc. But we can really get into the weeds there, because you could learn almost all of the same things, as Matt Damon so eloquently put it, for $1.50 in late fees at the library. So let’s focus on the ROI. 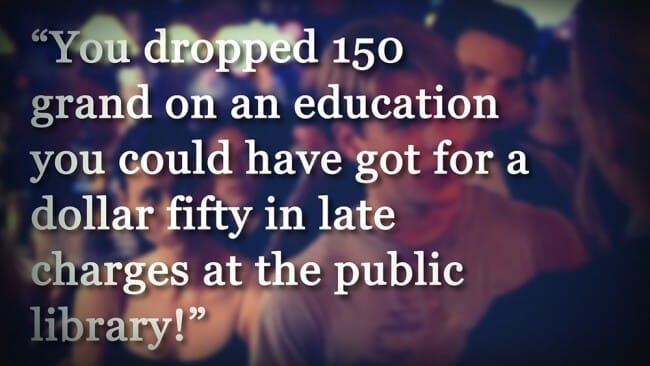 For any particular class, what will happen if you skip it?

On the other side of the equation, you need to consider what you gain by skipping. Going to class has another cost besides money: your time. You’re paying tuition dollars, yes, but you’re also using 45 minutes of your precious time every day you step into that classroom. What else could you be doing with that time?

In other words, if you decide to skip a class, you are throwing away around $22 if we go by the straight math example. If we’re going by the ROI example, you’re potentially lowering your GPA, reducing the value of your degree, and damaging a professional relationship – or you’re potentially doing very little harm at all. In either case, you’re getting 45 minutes back. How will those extra 45 minutes benefit you?

If you’re just lazy and don’t want to go to class, I’m not going to stand here and tell you that’s ok. Being honest, that’s a waste of your time and money, and whether or not you feel bad for doing it, you’re making a poor decision. Relevant:

Too tired to go to class? Fix your sleep schedule or don’t sign up for 8 a.m. classes.

Friends really want to skip class and play Smash Bros at 11 a.m. on a Tuesday? Trust me – in three years, those friends will be complaining to you about how they squandered their time in college and really don’t like where it got them. Plus, they probably main Kirby and just spam the brick move over and over. Not worth it.

But if you’re skipping that class for something of more value, the situation changes. For example, my friend Martin told me he skipped a class to go see Obama speak at our university, and he feels it was worth it.

I skipped several classes during my senior year to fly down to Texas, where I attended an event called FinishUp Weekend. I met a ton of really cool people there AND learned how to build iPhone apps while I was there. For me, that experience was more valuable than a few computer networking classes.

On a less forward-thinking note, I also skipped several of my Econ 101 classes during my freshman year. It was a required class, but I’d already learned almost all of it in high school. My reasons for skipping varied; sometimes, I’d do it so I could grab more hours at my part-time job. Other times, though… I just wanted to sleep.

After my freshman year, I decided to cut that out and committed to never skipping class unless I had a really good reason (like the Texas trip) – so keep that in mind if you think my previous experience skipping is an endorsement.

Bear in mind that I highly recommend getting to know your professor – it’s a really good idea – and if they know you, you’re probably not going to leave a great impression if you skip class to sleep in. Also keep in mind that, for smaller classes, skipping without letting your professor know beforehand can be disrespectful. In a huge lecture hall, they probably won’t even notice – but if you’re in a 15-person senior seminar, they will.

Those are the facts; I’ll let you make your own decision from there. If you’re going to skip a class, at least do it smart;

So there you have it, everything you need to know about skipping classes. One last thing… don’t skip class if you’re doing a group project, because then you’re just a jerk.