David Allen – author of Getting Things Done and probably the most well-known productivity nerd alive – aptly describes the purpose of your mind:

“Your mind is for having ideas, not holding them.”

In this case, I define the concept of an idea somewhat broadly: An idea is anything that might cause you to take action at some point in time.

This means an idea could be:

Most of these things are not ideas themselves, but your mind holds ideas of them – and that’s the problem. Even though your brain is essentially a giant parallel processor that can do many things at once, it generally works best if you’ve got it pointed at a single task at a time.

Trying to juggle a bunch of ideas which require future action only hampers your ability to execute on the idea you’re trying to work on now.

But here’s the problem:

Ideas come all the time.

An awesome idea for a story comes to you while you’re driving. Your friend tweets a really interesting article that you can’t read right now because you’re at the DMV. You realize that you need to add a new section to your personal website while you’re in class.

Since ideas can strike at any time or place, you need a system for capturing them, storing them away safely for later use, and getting yourself back on task.

What’s more, you need a system that lets you do this quickly and without much friction. This is the idea behind quick capture.

If you think about it, quick capture is not a new technique by any stretch of the imagination. In fact, any lifeform that needs to catch other lifeforms to survive uses quick capture – it’s just that instead of capturing ideas, they’re capturing their dinner.

Now, as long as I’m stretching metaphors and applying them willy-nilly here, I might as well take this opportunity to geek out a bit about my favorite animal – the peregrine falcon.

This bird has taken the idea of quick capture to its apex, and as a result is the fastest animal alive – when it dives, it can reach speeds over 200 mph.

Coming out of its dive, the falcon strikes the unsuspecting bird it’s hunting in mid-air with devastating speed.

There’s just one problem… as awesome as the peregrine falcon is, it’s not a particularly successful hunter.

In fact, according to this BBC video, peregrine falcons only have a 20% success rate when hunting. For every five dives they take, they miss four. (Though if you really want to get geeky about it, this University of New Mexico paper has conflicting data)

Now, keeping that figure in mind, let’s look at another – significantly smaller – hunter.

Dragonflies are marvels of nature, and they are also among my favorite animals for several reasons:

Oh, and there’s that one other little fact about dragonflies… they have a 95% success rate when hunting. When they set out to capture something, they succeed 19 times out of 20.

Several factors contribute to their staggering efficiency. They’re among the fastest flying insects, and their amazing wing design allows them to maneuver better than most things that want to get away from them.

Dragonflies also have incredibly advanced eyes. Whereas houseflies have around 6,000 facets in their eyes (those little individual sections you can see in macro photos), dragonflies have 30,000 – and they allow them to see in all directions.

In addition, the can accurately calculate where their prey is going to be based on its size, speed, and trajectory. This allows them to fly to that predicted spot.

As it turns out, picking moving prey out of the air is a pretty damn difficult task. (Which is why the U.S. military’s ground-based missile interception tests only have a 53% success rate – try not to let that scare you…)

The point is this: Both the peregrine falcon and the dragonfly are experts at quick capture. Both of them pick prey right out of the air with blistering speed.

However, the dragonfly does it a lot better – and this is because it’s carrying the perfect toolset for the job.

The principle that works for the dragonfly’s hunting efforts applies just as well to your own efforts to capture ideas. The more efficient and friction-less your quick capture system is, the better you’ll be able to store ideas right away and easily find them later.

So what sort of tools do you need for quick capture? Well, the classic choice is also the simplest: a plain notebook.

Dozens of authors, musicians, and other famous people have talked about their practice of carrying a notebook everywhere they go. Jay-Z carried a green notebook with him when he felt it was safe to do so, and even when he was out on the streets, he had a quick capture system for noting down rhymes:

“I would run into the corner store, the bodega, and just grab a paper bag or buy juice — anything just to get a paper bag, and I’d write the words on the paper bag and stuff these ideas in my pocket until I got back. Then I would transfer them into the notebook”

Using a notebook for quick capture is a fine method, and I recommend trying it if you like writing with pen and paper.

However, I’m a fan of a more modern solution.

My friend Alex Mangini likes to make fun of me for two things:

Case in point on the second one: when we were in New York a couple summers ago for a blogging conference, we found ourselves walking in some pretty heavy rain – and I immediately found the umbrella in my bag and was good to go (actually, this is a pretty good thing to keep in your backpack). He had to run into a CVS and buy one.

So, of course, I almost always have a notebook in my backpack. However, it’s not my main tool for quick capture – that honor goes to my iPhone. Here are the apps I use to make sure ideas and notes get saved quickly. 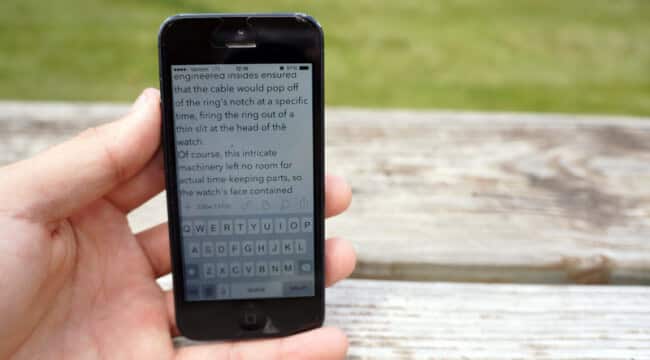 Drafts is an iPhone app that’s all about writing now. The moment you open the app, you’re presented with a blank document, a blinking cursor, and the keyboard. That’s it.

I don’t have to decide on a title for the note, or a notebook to file it into. I simply open the app and start pouring my ideas into it.

Once you’ve written something in Drafts, you’ve got a lot of options for what to do with it. You can:

Personally, I like to send my notes to Evernote – which is pretty much my second brain – so I can sort them into their correct notebooks later when I’m at my computer.

Since I’ve started using Drafts, I’ve been a lot better at noting down my ideas and actually getting them to a place where I can find and use them. Before, I’d shove ideas into the default note-taking app and usually forget about them.

Android alternative: It looks like Notal or the Evernote app are your best bets. 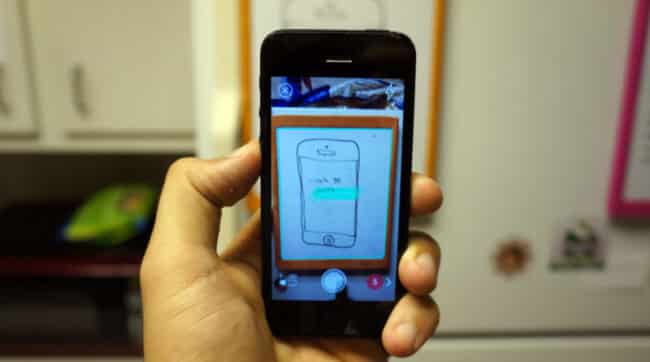 Scanbot is an awesome document scanner app that automatically detects the edges of a document and takes the picture for you. Once you hit save, it can also automatically send it to wherever you like – Evernote, Dropbox, Google Drive, etc.

Again, I prefer to send my scans straight to Evernote. I actually use Scanbot mainly to digitize my business receipts easily, but it’s also good for when I need to draw something.

Drafts is by far the most useful quick capture app on my phone, and Scanbot is one I use quite often as well. Here are some other apps that, while not used explicitly for quick capture, come in handy at times:

(Trello, HabitRPG, and Sunrise Calendar are all available on Android)

Even though I’ve got a big, powerful computer with two huge monitors on my desk, quick capture techniques are still useful when I’m at home working on it.

The main problem I face when I’m at home is having too many tabs open – which makes my computer slow down and keeps me in a very distracted state. As a person who is interested in everything and has random questions pop into his head all the time…

“Say, I wonder how much weight a chimp can pull?”

…I usually have a bunch of articles open on my computer.

The solution, for me, is a bookmarking web app called Pinboard. When it comes to not wasting time on the internet, this app is one of the most useful for me.

Pinboard isn’t the only bookmarking service out there – and unlike some others, it costs $10 (one-time) to sign up. I was totally willing to pay that after my friend Andrew showed me it, however; the service is clean, simple, and will never be bogged down with ads.

It’s also got a convenient little Javascript bookmarklet that I have up in my bookmarks bar. Whenever I find an interesting article or a cool new tool on Product Hunt, I just hit that bookmark and save it to Pinboard. Then I get on with my work.

Pinboard also has an option that lets you email bookmarks to your account, which works well when I want to bookmark an article from Safari on my iPhone.

Quick capture is simply the idea of building a system that lets you store your ideas and other little tidbits for later. It offers you two distinct benefits:

Setting up your quick capture system takes a bit of work up front, but it saves you a ton of time and stress down the road! The more efficient it is (like the dragonfly), the most successful you’ll be with it.

Further reading: My friends over at Asian Efficiency have a great primer for integrating quick capture into a GTD system. Even if you don’t use GTD (I don’t), it’s got some useful tips.

If you’re looking for more productivity tips, I’ve got 30 of them right here!

Featured Image: Dragonfly: Talking to me? by John Ragai, CC by 2.0