In The War of Art, Stephen Pressfield introduces a concept he calls Resistance:

“Resistance cannot be seen, touched, heard, or smelled. But it can be felt. We experience it as an energy field radiating from a work-in-potential. It’s a repelling force. It’s negative. Its is to shove us away, distract us, prevent us from doing our work.”

Basically, Resistance is that evil thing that makes us procrastinate and stops us from doing our work. It’s not tangible. We can’t shake it off or fight it physically. And we sure as heck can’t ever be complacent and think we’ve beaten it for good.

In fact, if you don’t read any further than this paragraph, I want you to take away one concept: Have a singular focus.

Research shows that our brains are wired to work on tasks serially, and not in parallel. This means that our brains suck at multitasking…but that we are good at focusing on one thing at a time.

The problem is, there are so many distractions these days that we’ve unconsciously trained our brains to not be good at focusing.

So how do you stay focused on one thing at a time when there are so many other, equally urgent tasks demanding your attention?

Here are six tips I’ve found to be helpful:

1. Pick One Thing the Night Before

“Unlimited possibilities are not suited to man; if they existed, his life would only dissolve in the boundless. To become strong, a man’s life needs the limitations ordained by duty and voluntarily accepted.” – I Ching

At the end of each work day, ask yourself, “If I could only get one thing done tomorrow, what would it be?”

Make sure you focus on just that one thing in the morning and, if all goes well and you finish that task, feel free to ask that question again and get started on your next task.

Of course, you’ll have a hard time keeping up with your schoolwork if you only work on one thing a day, but the idea is to:

These points said, though, I also…

2. Have a Weekly Plan

This is a habit that I developed that not only helped me get organized – it also helped calm my anxious monkey brain.

Every Monday morning (or if I’m especially strapped for time that week, Sunday night), I’ll take 60 – 90 minutes to map out what my week will look like in an Evernote file. I update the file at the end of every day to quickly plan out what I want to do the next day. 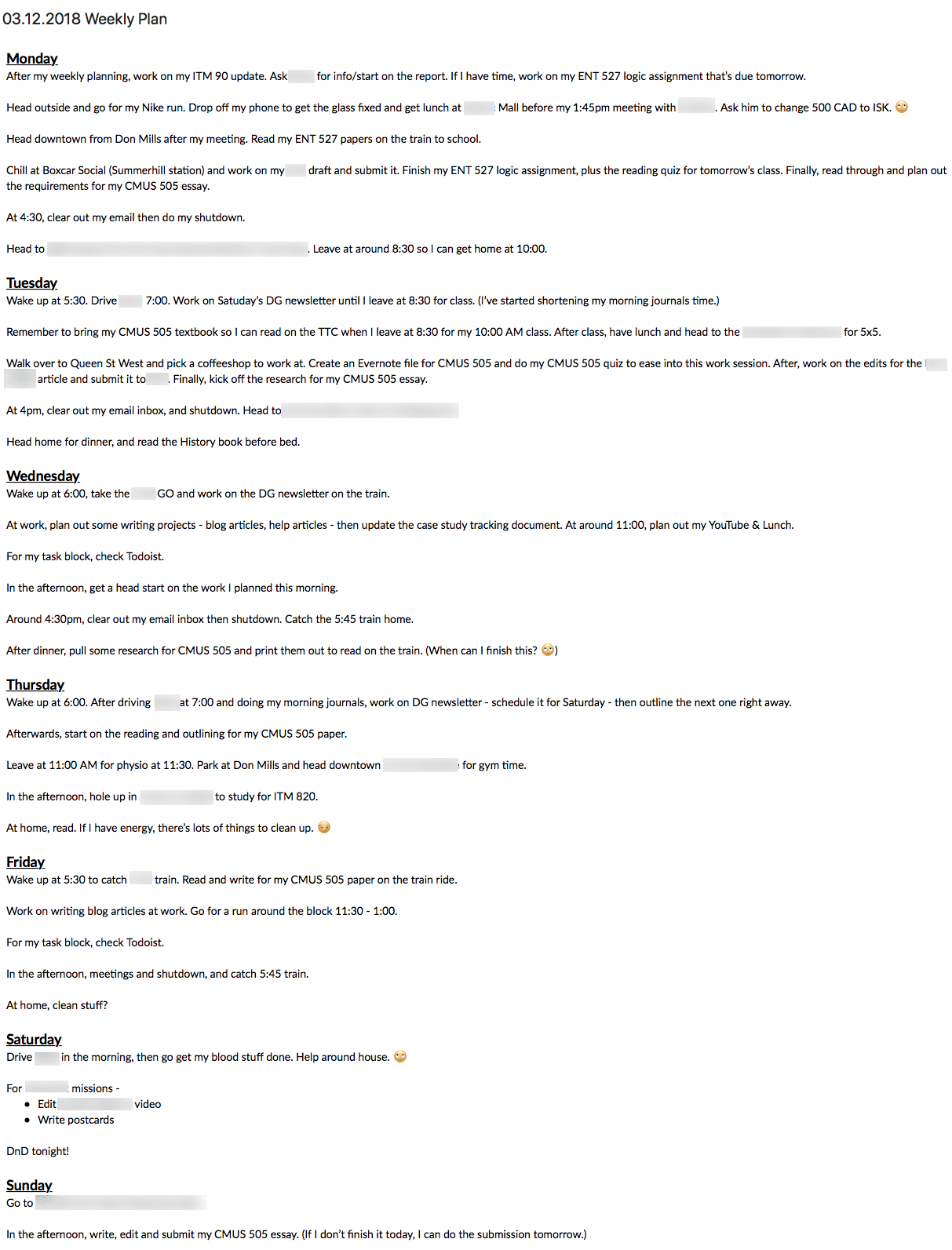 And that’s the beauty of a weekly plan: having everything you need to do time-blocked out helps you focus on the assignment in front of you when you’re studying, because you don’t have to worry whether you have time for that other thing you need to get to. You know that, as long as you follow the plan and finish the task, you’ll have more than enough time for everything else.

In the book Deep Work, one tip for cultivating a deep ability to focus is to “drain the shallow work.” Cal Newport, the author, defines shallow work as:

“Noncognitively demanding, logistical-style tasks, often performed while distracted. These efforts tend to not create much new value in the world and are easy to replicate.” (6)

Shallow work includes things like sending emails, posting a new photo of your coffee on Instagram, and buying more instant noodles from the campus grocery store – things that anyone can do without much thinking.

Cal then goes on to warn against the danger of shallow work:

“Spend enough time in a state of frenetic shallowness and you permanently reduce your capacity to perform deep work.”

If we habitually check our phones, scrolling through our social media apps to see if a new notification has popped up, this will permanently hinder us from being the focus machines we want to be.

Reading this in the book made me paranoid, so I’ve invested in the Freedom App for my Mac, and (OFFTIME) for my Android phone.

These apps block certain websites and apps on my laptop and my phone for a specific length of time. I totally swear by them because without these, I wouldn’t get as much done as I do. I’d still be in the infinite app-loop of checking YouTube, Instagram, Facebook, LinkedIn, Twitter, and my email.

(Tip: A Freedom App subscription gives you access to both their desktop and iOS versions. Since they don’t have an Android app, they’ve partnered with (OFFTIME) to allow site blocking on Android.) 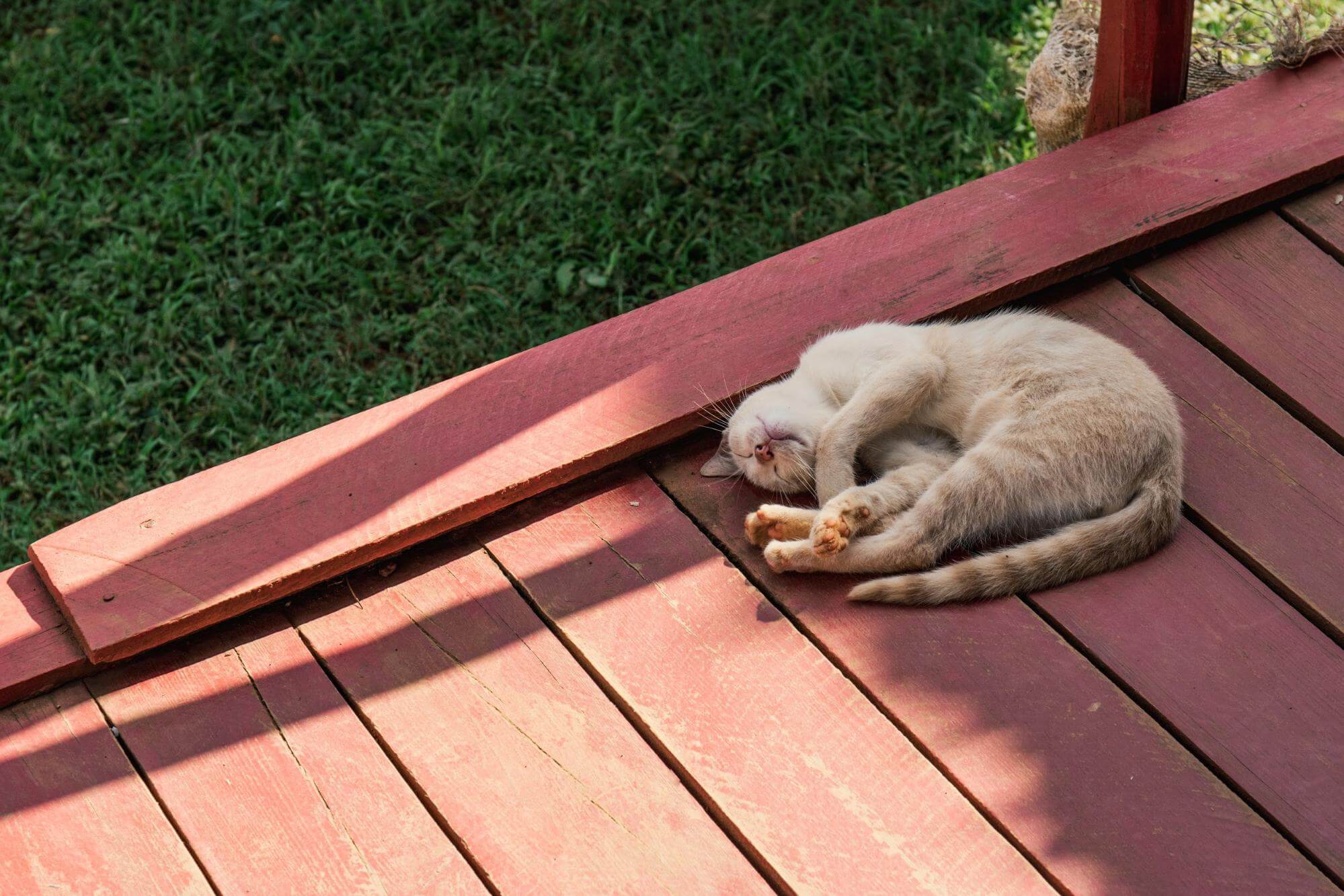 Let’s get this straight: getting at least 8 hours of sleep every night, or taking time off is not laziness. In fact, in Essentials of Strength Training and Conditioning, the authors explain that rest (or “unloading”) is the way to prepare the body for work:

“The purpose of this unloading week is to prepare the body for the increased demand of the next phase or period.”

And if you’ve ever tried to sleep early, you know that it’s not easy; It takes a great amount of discipline and commitment to excellence to tune out the world and turn in, when you’d rather stream just one more episode of Black Mirror (or watch White Chicks for the 15th time).

In fact, by giving yourself plenty of time recuperate, you’re actually doing good, important “work” that will reap rewards down the road.

To underscore this point, in Stephen Covey’s seminal personal development book, The 7 Habits of Highly Effective People, he calls attention to the importance of the 7th habit – Sharpening the Saw – with this quote from Honest Abe Lincoln:

“Give me six hours to chop down a tree and I will spend the first four sharpening the axe.”

So if you find yourself watching video after video of pandas rolling around on the ground when you’re supposed to working on an assignment, don’t beat yourself up over it.

Instead, push away from your desk, take a deep breath, and have the courage to wrap things up, call it a day, and try again tomorrow.

5. Get Comfortable with a Routine 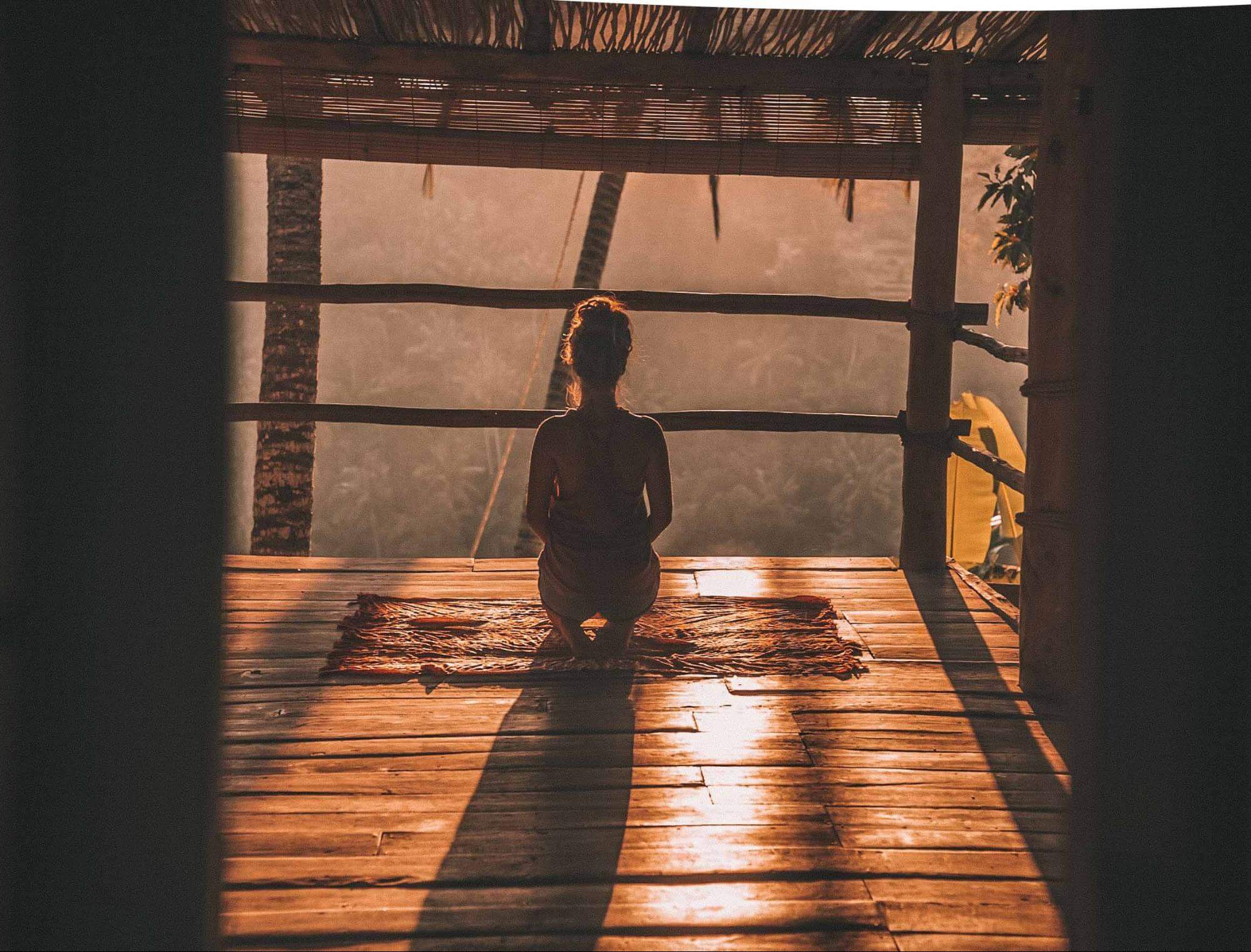 Getting started on schoolwork is hard enough without having to worry about where you’ll do it, when you’ll do it, and what supplies you need to get the job done.

The problem is worse for me because I’m a commuter student, so I don’t have a quiet dorm room to sit in and do my work.

Here’s how I’ve fixed that problem:

(Pro Tip: Be sure to check out other CIG-approved playlists on Spotify and YouTube.)

Some thoughts on the last point, though: I’m OK with having a routine for most things, but when it comes to music, having the same old beats for hours starts failing me when I hit an afternoon slump.

If you’re like me and you get tempted to hit the “Top 50 Global” playlist on Spotify after lunch every day, keep this quote from Pierce Howard, author of The Owner’s Manual for the Brain, in mind:

“The more routine a stimulus is the less it interferes with rival stimuli.”

This means that when you’re craving some pop-infused tunes in your day but you still have some work to do, be careful to at least pick music you can tune out.

Imagine this scenario: Let’s say you want to lose 20 lbs to look good for your date at prom or graduation gala.

Would you expect to hit your goal weight if you spent most of your week gorging on McGriddles, Coke, and candy, while only eating vegetables and whole foods on the weekends?

Yeah, didn’t think so. If you wanted to lose weight, you’d spend most of your week eating clean, whole foods, and maaaybe have a cheat day once a week, right?

This tip is counter-intuitive in today’s age, and it may even seem archaic and needlessly limiting. So if you don’t want to stop checking your phone 123456 times a day cold turkey, just start practicing focusing for progressively longer periods of time.

A perfect way to practice this is to block out time each day to read without distractions.

You can start with reading for 15 minutes as soon as you wake up before you check your phone.

(Pro Tip: Put your phone on Airplane mode before you sleep, so there’s NO WAY there’s going to be notifications on it in the morning. Better yet, bury your phone in your backyard every night so you’re not tempted to reach for it first thing in the morning. A bit extreme, but whatever works, right?)

You can also carry a book around for those times when you’re bored and itching for something to do, like I do on my 3-hour round trip commute to school. 🙄

After a few days, you’ll find that you start enjoying and craving the mental clarity. Plus – and this is speaking from experience – when you stop cycling through social media apps and blogs, you’ll find that you have a ton of extra energy left over at the end of the day! (Now about that Brazilian Jiu Jitsu class I’ve been wanting to take…)

“Resistance has no strength of its own. Every ounce of juice it possesses comes from us. We feed it with power by our fear of it. Master that fear and we conquer Resistance.” – Steven Pressfield, The War of Art

All we can do is struggle against Resistance to get our most important work out the door for the day.

When we do this, we put one more tick on our side against Resistance. And as we build momentum, it becomes a little bit easier to beat Resistance again the next day.

The goal of this article was to help you optimize your life so you can conquer resistance day after day. When you string together days of productive work, this is when the magic happens.

And you know what?

Now that I’ve written all 2,048 words of this blog post, it’s time to fold up my Macbook and celebrate, because I beat Resistance.

But I also have to get some quality rest in tonight, because I have to live to fight Resistance another day.