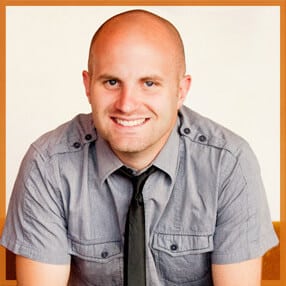 However, other jobs are fascinating. People who have jobs like sailing the ocean, writing novels, or running a brewery compel you to say:

“How did you get into that?”

That’s the question I had when I first met Grant Baldwin, my guest on today’s podcast.

Grand is a professional speaker, and he travels all across the U.S. speaking to tons of college and high school audiences every year.

I met Grant while working as an orientation assistant during the summer before my sophomore year. My particular team was tasked with finding a cool speaker to do a session on managing money, which would be part of a huge event put on for incoming freshman called Destination Iowa State.

We ended up hiring Grant, and my job was to show him around campus and help him with anything he needed, so I got to know him a bit during his time there. I also ended up seeing his talk several times, and while the personal finance info was good, I had other questions running through my head:

These are questions I still had recently, so I decided to ask Grant to come onto the podcast and tell his story.

As it turns out, the “How’d you get into that?” question is one that Grant is quite interested in himself, which is why he’s starting his own podcast this month that’ll do exactly what I’m doing here – interview people with really cool careers and get the details of how they got into them.

Be sure to hit up the link to his site in the show links below if you’d like to know more. Otherwise, enjoy this episode – which also includes some practical public speaking advice that anyone can use (even if you’re not a pro speaker).

A couple great quotes from our conversation:

“It’s about getting a lot of at-bats; time in the trenches is what builds expertise” | Tweet This

“If you can’t show some of your work, it’s tough for someone to justify spending any money on you.” | Tweet This

“Most people won’t do the work, even if you tell them what to do. It’s refreshing to see someone willing to hustle.” | Tweet This

What you should do right after listening:

If you enjoyed this episode, give the CIG podcast a review on iTunes!