If you’re just starting college and you’re scared about it, you’re not alone.

And, fortunately, you can do a lot to alleviate some of that fear. In today’s article, we’ll explore three particular methods.

To start, here’s a quote from Apple’s late founder Steve Jobs that I like to revisit from time to time:

“Everything around you that you call life was made up by people that were no smarter than you and you can change it, you can influence it, you can build your own things that other people can use.”

Now, I think this quote is insightful as a whole, but for now you should pay special attention to the first half of it.

Steve’s articulation of one of the fundamental truths of life – that all the rules and systems we live by were simply made up by regular people – points directly to what I believe should form the core of your mindset when you’re starting college:

Nobody knows exactly what they’re doing.

None of us knows exactly where we’re going. We use models, best practices, and advice to hopefully steer ourselves in the right direction, and we make lots of educated guesses. Still, we’re never certain.

If you need more proof, take a look at the results of the First-Year College Experience survey. This study, which was conducted by Harris Poll and surveyed over 1,500 college students, illuminates just how common feelings of fear and unpreparedness are in new students. You can take a look at the survey results yourself if you’re curious, but I found these two stats to be particularly important:

These statistics are concerning, but they do illuminate the fact that this is a common problem. You’re absolutely not alone in this.

With that being said, what can you do to get over those fears? Here are three ideas. 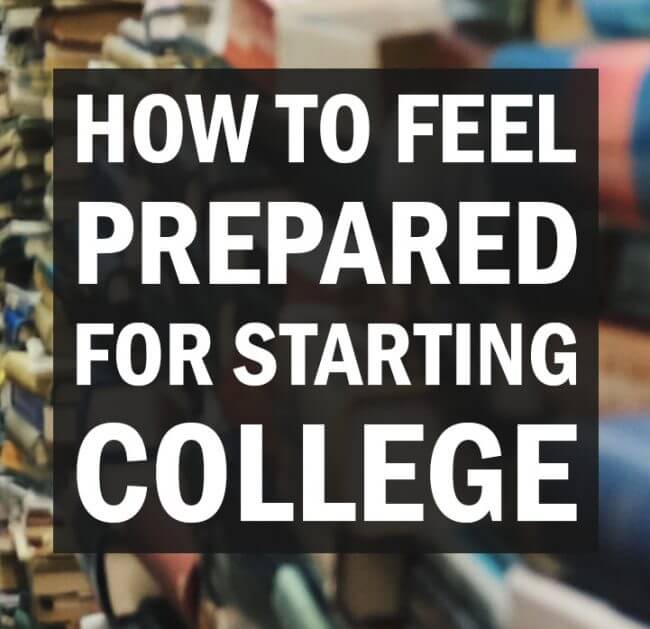 Adopt a Mindset of Adaptation

Again, nobody knows exactly what they’re doing. Nobody can see what’s coming in clear detail.

So that game is to simply appear that you know what you’re doing. The people who play that game best do a few things. They:

Among those practices, the keeping of a positive attitude is probably the most important. As Neil Pasricha mentioned in his book The Happiness Equation,

How you choose to view what happens to you plays a huge role in determining how happy you’ll be and how successfully you’ll move forward.

View the start of college as a challenge to be met. Yes, you’ll run into things you don’t know how to handle. Situations will arise that you couldn’t predict, and you’ll have to work really hard and endure some pain and frustration to overcome them.

But that’s the beauty of growth and progression. If you could see it all mapped out in front of you, with nothing hidden or uncertain, where would the excitement be?

It’s like playing Age of Empires II with the laser-shooting sports car cheat enabled. It’s fun for a couple minutes, but after that you realize that you know exactly where the game is going. Nebuchadnezzar’s pikemen will never match your army of 575-horsepower Cobras. Things get boring pretty quick.

Seek Out Help When You Need It

Two more qualities will prove indispensable in your journey – wisdom and humility. Socrates once said:

“The only true wisdom is in knowing that you know nothing.”

Of course, all those old philosopher dudes loved to take their maxims to extreme ends as they sipped wine and compared beards.

Still, it’s wise to realize that there’s a lot you don’t know, and humility comes in being willing to accept help from those who know what you don’t.

Luckily, college is teeming with people who are invested in your success. Your university probably includes, in addition to other things:

Additionally, if you’ll be living in dorms, get to know your Resident Adviser.

I was an RA for one semester during my junior year, so I know just how much training that RA’s go through in order to prepare for the job of helping 40-60 students in a dorm hall navigate the school year. We had to learn about any and all aspects of the university that were relevant to students, and if we didn’t have the answer to a question, we at least had a huge binder in each of our dorm rooms that would point to someone who did.

Do What You Can to Prepare

Lastly, it’s a good idea to simply prepare for college in advance. When I was in high school, I did this in a few ways. For one, I toured Iowa State University a year early and made sure to ask lots of questions when I was there. I also talked a lot with my high school guidance counselor, who helped me in a lot of ways – including pointing me to resources for finding scholarships.

Additionally, I went to my local library and read pretty much every college prep book they had on the shelf. This was really helpful – in fact, doing so led me to make a change to my college plan that made a huge difference in how my freshman year went.

See, before I read all of those books, one of my friends and I had decided that we were going to skip living in dorms during our freshman year. Our plan was to get an off-campus apartment right away – which sounded great, because it would let us buy our own groceries and would have given us a lot more room for Guitar Hero accessories and couches and stuff.

However, one of the books I read advised me to live in the dorms during my freshman year. It made a good case for it, too – the book said living in dorms would make the process of making friends much easier, and it would put me much closer to on-campus opportunities.

By contrast, living in an apartment would discourage me from going back to campus after the day’s classes were over. Also, people living in apartments aren’t quite as openly social as people living in dorms – which just comes with the territory. It’s easy to leave a dorm room door open so people in the hallway can pop in. That doesn’t work so well with an apartment.

The book convinced me, and my roommate and I decided to ditch the apartment idea in lieu of living in the dorms – which turned out to be a great decision. The author was right; living in the dorms put me no more than five minutes away from anything on campus via skateboard. So I joined tons of clubs and went to lots of events.

They were also incredibly social; we moved in an immediately met a group of great friends – one of whom I still live with today, and many of whom I’m still in regular contact with.

Now, as much as I enjoyed living in the dorms (and I do recommend it if it’s financially viable), I really told that story to encourage you to do the same thing I did – read up ahead of time so you’re prepared.

Want some recommendations? Here are a few that I read:

More recommendations can be found on my essential books list.

Additionally, Martin and I talked in-depth about becoming college-ready in Part III of The Path to College. If you enjoyed this article, go give that episode a listen.