Over the course of 24 hours, starting on Sunday and ending Monday, I went from having 97 unanswered emails in my inbox to sweet, victorious inbox zero.

When the inbox count hit zero, it represented freedom from a 2-month cycle of misguided optimism, anxiety, and guilt. And I’ve got my favorite Avenger to thank for the liberation.

This post will explain how I did it and why Captain America played a vital role, but first I have to make an admission – as much to myself as to any of you reading this:

I am not the Hulk. *sheds silent tear*

This unfortunate fact is true in multiple ways. I’m not green, I don’t weigh more than a tank, and I can’t stop a giant, flying space worm…thing… in its tracks. I can’t even deadlift 550 pounds. Simply put, brute force is not my strength.

Now, last time I checked, my email inbox did not weigh 550 pounds. Still, the fact that I’m not the Hulk applies here as well.

But I’m getting ahead  of myself; before explaining this analogy, I need to set the stage by explaining the problem.

Over the last two months, I’ve been terrible with email. Due to travel – Camp Nerd Fitness, Podcast Movement, and a couple other trips – I didn’t keep up with my daily Inbox Zero goal in HabitRPG.

As a result, the emails piled up to levels that weren’t easy to clear out in a day – so I just neglected them entirely. My negligence eventually culminated in an inbox that held 97 unanswered emails.

Since I delete everything that isn’t important every day, each of these emails that remained in the inbox required some sort of action – essentially leaving me with a 97-item to-do list.

This to-do list was stacked right on top of all the other things I do – writing blog posts, podcasting, making videos, coding, etc… so you probably understand that it was all a bit stressful.

Still, I didn’t intend to neglect the people waiting for replies in my inbox. I had good intentions. In fact, for the past two months, I’d wake up on most days and think:

“Alright, this is THE day that I get them all answered!”

However, just as Derek Sivers says ideas are just a multiplier of execution, good intentions are only useful if they’re paired with meaningful action.

Unfortunately, my actions always fell short of where my intentions were directing them. Now that I can look at this cycle through the crystal-clear goggle of hindsight, I can see the problem:

I was trying to attack my email like the Hulk.

The Hulk likes to smash. That’s about it.

Put into productivity terms, the Hulk’s preferred method of solving a problem is to just brute-force it. He doesn’t think ahead. He put much thought in at all.

He just gets mad and starts attacking the problem head-on.

This works pretty well when you’re a gamma ray-induced freak of nature with basically unlimited strength and you’re fighting giant space worms or Abominations. But here’s the problem:

Every day I’d try to tackle my email, I’d simply try to brute-force the problem. I’d open my inbox and resolve to answer every email, one after another.

Sometimes I’d resolve to do it FIFO (first-in, first-out) to better accommodate people who had been waiting longer for responses. Sometimes I’d go LIFO instead. Sometimes I’d just pick messages at random.

Invariably, I’d open an email, realize the process of responding to it was complex and would take time, and immediately get deflated.

For instance, one email came from an old web design client, saying their website was having some problems. I’d opened the email before and tried some easy fixes to no avail.

So, while trying to brute-force my entire inbox, I realized finishing that ONE email would involve:

Were this my only task, it would be totally manageable. Combined with 96 others in my inbox, plus a ton of creative/actual work tasks, it’s something that will stop a brute-forcer right in their tracks.

So obviously the Hulk Method’s a no-go. How did I end up getting to Inbox Zero?

If you want to know why Captain America is my favorite Avenger, just watch the scene in Avengers during the big battle in New York where he calmly comes up with a plan of action for containing an entire alien invasion using just a few people.

Cap’s easily the least powerful member of the core Avengers (those that got movies) – Thor’s a demigod, Tony Stark has the suit, and Hulk’s…. Hulk – but he’s also easily the best at planning and directing the rest of the team.

Here’s the realization I had:

An inbox with 97 to-do’s is like a large-scale alien invasion. You can’t contain it with brute-force tactics.

Rather, you need to come up with a well thought-out plan of attack that strategically tackles problems, one by one, while also managing your limited resources effectively. In this case, those resources are:

Taking these resources into account, I came up with a plan for tackling my inbox: 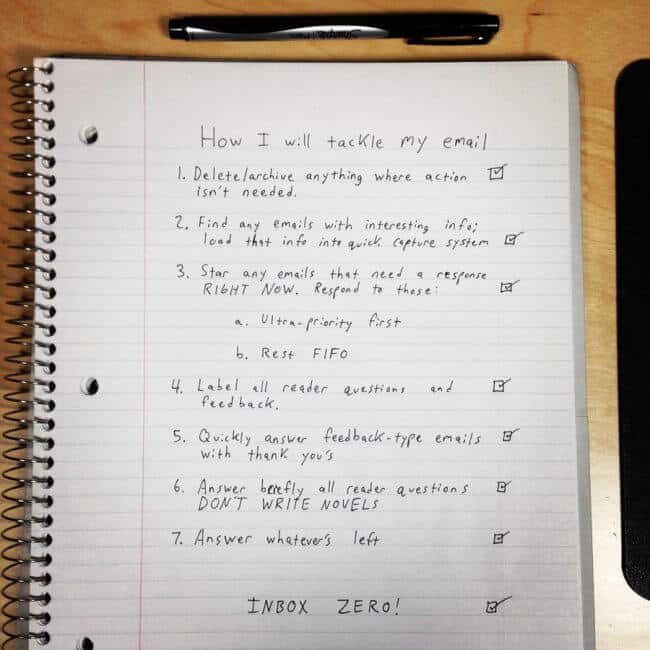 My first priority was to take just a bit of time to reduce the overall volume of emails I was dealing with. To do that, I got rid of anything that didn’t require action, then went back through and tackled any emails that held interesting information – info that needed to go into my quick capture system rather than sitting in my inbox.

After that, I took on the highest-priority items first.  Once those were finished, I faced down the emails that formed the bulk of my inbox: reader feedback and questions.

Though I get a lot of email, I still want to respond personally to students who email me. However, as you might be able to tell from the “DON’T WRITE NOVELS” note, I’m often bad with brevity.

When someone emails me a question, I’ll often write them what amounts to an entire article in response. That’s time I could have spent writing actual articles – which can be seen by more than one person.

So this time, I prioritized brevity. I took to heart this quote from Scott Hansleman’s talk on scaling yourself (you can read an excellent summary on the Zapier blog):

“You have a finite number of keystrokes left in your hands before you die.“

The point is that as few of those keystrokes as possible should be spent on email. Hanselman advises keeping emails limited to 3-4 sentences – anything longer than that should be a blog post or a wiki entry.

When I started Email Destruction Plan Alpha Bravo Omega (I just made that up) on Sunday, I tried to stick to this rule – and doing so really helped.

It’s Not Just for Email

As I said in the intro, I started tackling my email seriously on Sunday afternoon. By Monday afternoon, I had answered, archived, or otherwise dealt with all 97 emails and hit Inbox Zero. Nirvana. Or something like that.

I’ll be honest – even with my plan, doing so took a bit of Hulk-style brute forcing. I knew what I had to do, but it was still pretty difficult to keep going after five straight hours of answering emails. And that’s the thing:

We all need a little bit of Hulk in us.

We all need to cultivate that determination to push forward – that grit – required to actually finish huge projects.

We also could use a bit of Tony Stark in us as well. I’ve talked about my favorite email apps before, and there are definitely apps that made this process easier:

Still, it all start with Captain America’s strong suit – planning.

Without a plan, tackling a huge, multi-faceted project is much more difficult and requires much more willpower.

When you have direction, you only need to summon the willpower to execute in that direction. Without it, you’re also sapping willpower on the fly to plan your next move – and you don’t have the benefit of being beholden to your past self’s plans (I’ve talked about this concept before).

That’s why the Captain America method isn’t just for email. If you’ve got an out-of-control inbox, definitely make a plan for it.

But when you move on to your next project that’s unrelated to email, bring the First Avenger with you.

Featured Image: Captain America 3 Up Against Batman vs. Superman in May 2016 by BagoGames, CC BY 2.0