A couple of weeks ago, we covered the relationship between music and studying – and whether music is an effective study aid, or just a distraction.

If you’re like me, music is a pretty effective study aid.

Some days; however, it’s just not enough. In fact, nothing is enough – you just can’t make yourself study.

In these moments, maybe you’ve wished for something you could just plug into your ears that would make you do your work. In other worse, maybe you wished for… 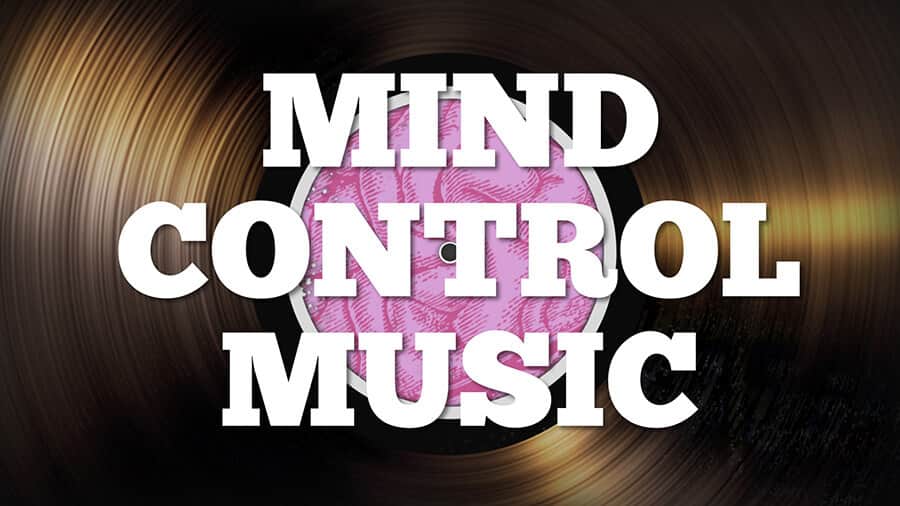 I’m going to spoil it for you right up front… mind control music doesn’t exist. If books, comic books, and movies are any indication of how people would use it, though, that’s probably a good thing.

Putting the idea of mind-control music aside, though… what about music designed to cause a small cognitive change, such as increasing your ability to focus? Does that exist?

According to a lot of people, the answer is yes. If you search for “brain music” on YouTube, you’ll get a ridiculous number of videos with music meant to increase focus, boost the quality of your sleep, and bring about tons of other benefits.

Now, there are many different techniques people use to create this kind of music, but the one you’ve probably heard of is binaural beats, which I’ll use as an example for this article.

What is a Binaural Beat?

A binaural beat is actually an auditory illusion; it’s what happens when you take two tones, similar in pitch, and play one in each ear.

If you were to play a binaural beat track and listen to only one earphone, you’d simply hear a steady tone. However, once you listen to both earphones at the same time, your brain perceives a third tone at a pitch equaling the difference between the two real tones. 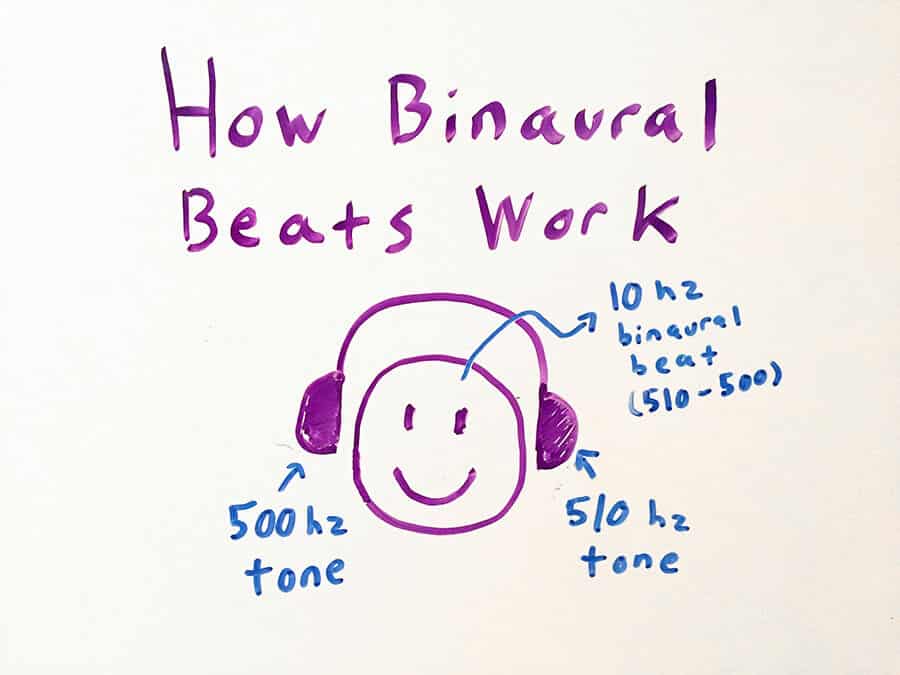 The result is that you hear a fast-paced “beat” oscillating between your ears. There are a few requirements for the illusion to work:

In their simplest forms, binaural beats can hardly be considered “music” at all – they’re just a steady sound. However, many binaural beat tracks are often mixed with music.

So what does all this have to do with creating brain-enhancing music? To understand that, lets dig a little bit into how the brain works.

Clusters of neurons fire in a rhythmic fashion, and this activity is called neural oscillation – a more popular term for which is brain waves.

In 1924, a German psychiatrist named Hans Berger invented a device called an electroencephalogram (EEG), which can be used to measure human brain waves.

It was discovered that certain frequency ranges of these brain waves are associated with different types of mental activity.

For example, slow delta waves are measured during the deepest phase of sleep (Stage 3), whereas higher-frequency beta and gamma waves are associated with wakefulness and mental attentiveness.

Once that was known, it wasn’t too long before scientists had the idea to try influencing these brain waves using external stimuli. 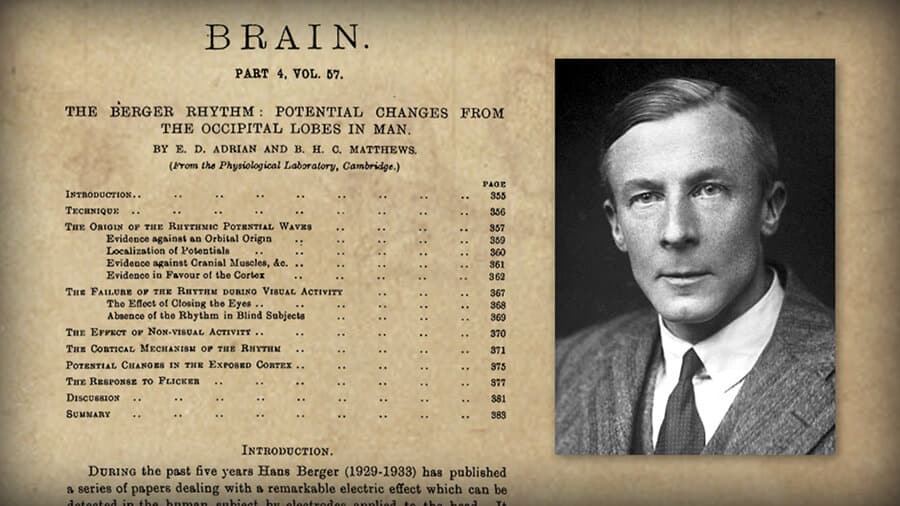 In 1934, an English researcher named Edgar Adrian demonstrated how using photic stimulation – essentially flashing lights in front of someone at a specific frequency – could be used to drive the brain’s alpha waves above and below their natural frequency band.

As the subject experienced the stimulation at a certain frequency, it caused their brain waves to move toward a similar frequency; in other words, they synced up. This is a phenomenon known as entrainment.

Then, in 1949, a researcher named William Grey Walter published a study showing that photic stimulation could also cause mental and emotional changes.

Now, in addition to photic stimulation, audio has also been studied as a form of stimuli that can cause changes in brain activity. Binaural beats are only one type of auditory stimulation that’s been developed, but they seem to be the most commonly known and used.

When people develop binaural beats (and other types of auditory stimuli), the principle is the same as with Adrian’s experiments; design the beat to oscillate at a specific frequency in order to cause brain waves to move toward that frequency. This is called auditory driving.

Now we get to the million dollar question: Does this stuff work? Can you put on headphones, turn on a binaural beats track, and suddenly focus better, become more motivated, or gain some other benefit?

After steeping myself in as much research as I could over the past couple of weeks (seriously, it was a lot), it seems that – from a scientific standpoint, we just don’t know yet.

I’ve found several studies with results indicating that auditory driving is beneficial; however, I’ve also found studies where the experimental group’s results are no different than the control group.

From there, we venture into anecdotal territory. A lot of people say binaural beats and other types of “brain music” work for them. And a lot don’t. And of course, for the ones who do say it works, you always have to consider that some part of their results may be due to a placebo effect.

Placebo Effect: What happens when a person has a response to a placebo – anything that seems to be a “real” medical treatment, but actually isn’t.

Now, that’s not to say that this technology doesn’t work, or that positive reports are inaccurate. It simply means more research needs to be done to establish a true scientific consensus about what’s happening.

In the mean time, if people find these tools to be helpful after the initial excitement wears off, then they’re still beneficial in some way.

During my freshman year, I discovered binaural beats and tried them out, as I was interested in pretty much anything (aside from drugs) that would help me study more effectively.

The results? Eh… not that great.

The main problem is that binaural beats don’t sound good to me. I can perceive the beat just fine, but it’s annoying. And because of that, I quickly gave up trying to use them and went back to my normal study music.

Near the end of last year, though, my interest was renewed in this topic when I discovered a new site called Brain.fm. This site creates algorithmically-generated music designed to help you focus (they also have relaxation and sleep tracks), and being the curious person I am, I gave it a try. 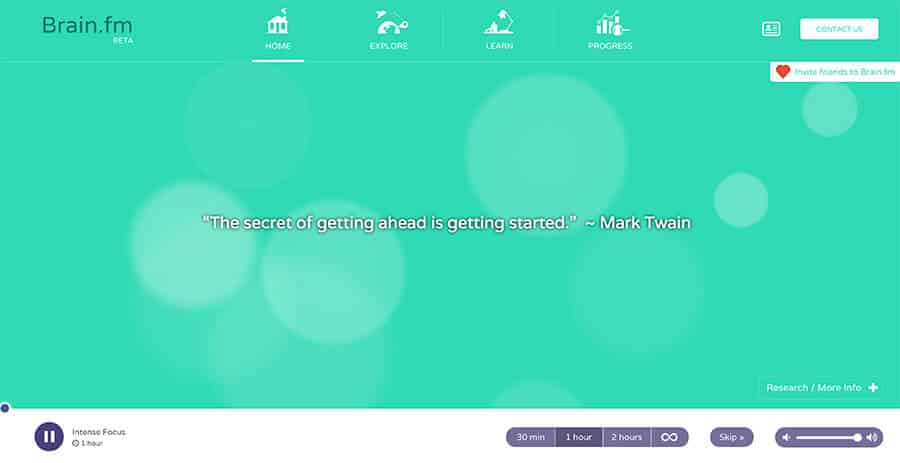 In contrast to my experience with binaural beats, I actually found Brain.fm to be helpful! I felt more focused when I was using it, and more importantly, the music it generates is actually pleasant to listen to.

After I tried it a few times, I invited the co-founders onto the podcast so I could learn about their technology (and also geek out about the relationship between music and the brain). From what I understand so far, Brain.fm’s technology builds upon the foundations of earlier tech (such as binaural beats) in some ways, but it’s also quite a bit different.

The main differences are:

Because their technology incorporates so many new elements, there hasn’t been much time to do a whole lot of research around its effectiveness. However, there have been a couple of preliminary studies done at Northwestern University, which have shown some promising early results on reaction time and visual pattern recognition tests. 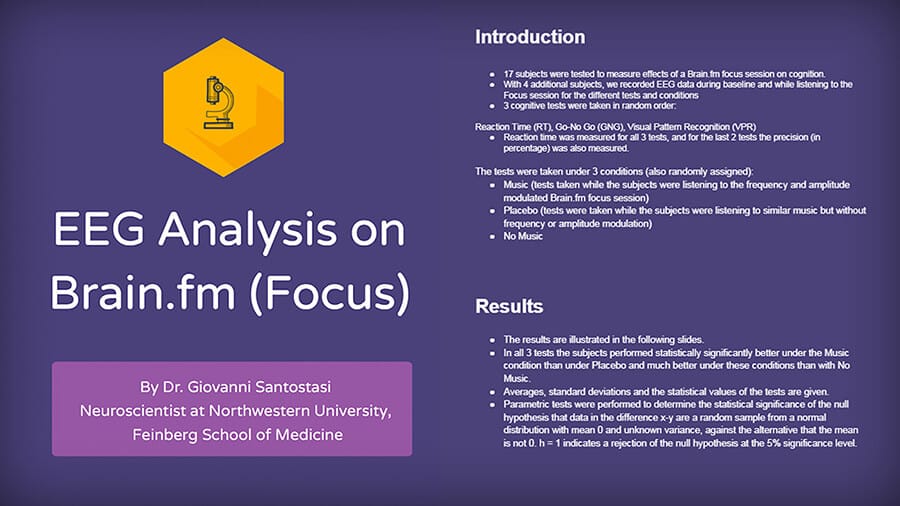 That being said, at this point I can’t say whether or not Brain.fm will prove effective on a large scale; however, I’ve been using it regularly for about two months, and I’m still getting good results. In a few more months, I’ll circle back to this topic and do a full review – that should be enough time to know if it’s effective (for me at least) in the long run.

In the mean time, if you’d like to try it out yourself, they gave me a link you can use to get a 30-day unlimited-session trial instead of their normal limit of 7 sessions.

Update Dec. 18, 2016: After using Brain.fm regularly for several months, I’m still finding it to be quite helpful as a focus aide. I’ll write up a full review soon, but to sum it up, I recommend at least giving it a try.

And, because I find the service personally useful and believe in it, I’ve decided to make the link above a referral link – meaning that if you go through the trial and decide to subscribe afterwards, I’ll earn a commission. I think it’s important to be 100% transparent about relationships like this, and – as with anything else I recommend – I encourage you to do your own research and testing before deciding whether or not to subscibe.

If you find it useful and choose to use my link, thank you!

I’ll also link to some examples of binaural beats and other types of music meant to enhance brain function down below so you can try those out as well, and I’d be curious to hear from you guys if any of them seem to work better than the study music you normally use – or better than silence, if that’s what tends to work best for you.

There’s a lot, so let’s break this into a couple of list. First, the music links:

And now the research: