Don’t you just hate it when ATMs charge you to take out your own money? It really grinds my gears, man. Really raises up that arterial tension, man.

A $2 fee at a different bank than yours is a pain. Having to pay $4 at a concert to put your mitts on one of your own Jacksons is an even greater injustice.

But that’s still chump change in the grand scope of things. Did you know there are places where you’ll have to pony up a whole $10 just to use the ATM? What kind of place could possibly drive someone to make this kind of sacrifice?

But more on that later. Right now I want to talk to you about the value… of value.

Sound confusing? Well, here’s the idea in it’s simplest form, in case you’re one of those high-strung types that can’t spare the time to read my prose in its entirety:

The cost of a product of service should be determined by the value it provides to the customer – NOT by how much effort goes into providing it.

The reason I’m dedicating an entire post to this simple idea is that far too many talented people – recent grads, entrepreneurs, freelancers, you name it – don’t understand it.

When you’re just starting out, you don’t have much experience in being paid for the work you do. This inexperience, coupled with the typical feelings of Impostor Syndrome that many beginners have, can cause you to sell yourself short.

So do yourself a favor: read this post and take it to heart. It could make a huge difference in your future income potential.

It’s time to illustrate my point. To do this, I need to tell you a story involving 17-year-old me, a very attractive lady business owner, lots of fiberglass insulation, a perilous balancing act, and about 40 loud dogs.

I graduated high school in May of 2009. A few months before that, I had decided that I was done working in anything having to do with food and/or retail, so I got a job tutoring students at the local community college.

After graduating, I still did this – but it really wasn’t bringing in much cash. So I went looking for another job I could do for the summer. The only problem was that, as the baby of my grade, I still wasn’t 18. On top of that, I was heading off to college in just three months.

Well, guess what? Nobody wants to hire a 17-year-old kid who’s just going to leave in a few months. I was too young for the temp jobs that could have used me for a short time, and couldn’t offer the staying power all the other places would need.

In the steady employment department, I was screwed. Well, screwed until I moved off to college and could find a part-time job there.

But that was three months away. This was a problem because…

So I needed a solution. Luckily, I had been playing around with HTML and learning to build websites for quite a while – so I decided to try my hand at freelancing.

I put up flyers on community billboards, ordered a bunch of those crappy free business cards from (avoid these – make good ones), and even got a car magnet to advertise. I hit up job boards and Craigslist, kept my ear to the ground, and eventually landed a few projects.

Most were typical web design projects, but one of them was… less than typical.

Shortly before my 18th birthday, I got a call from the owner of a local dog daycare. This was the attractive lady business owner I alluded to earlier. Here’s how our conversation went down:

“Hey Thomas, I heard you do web design. I’ve got a project that I’m wondering if you can help out with; basically, I need my building wired up with webcams, which will stream live video of the dogs to my website so my customers can check in on their dogs whenever they want.”

“Sure thing! It’s not really anything I’ve done before – or even know how to do – so as long as you’re willing to deal with that, I’ll do my best to figure it out…”

This reply is going well so far. Yes, it is a good idea to be willing to learn on the fly as long you’re not likely to cause any harm.

I hung up the phone and did a bit of research online to see what I was getting myself into. Soon, I found a program called UStream that would let you broadcast your webcam to the internet.

That seemed like all I would need, so I headed out to get started on the job. I figured it would only take me a couple of hours to do the whole thing, netting me a cool $25/hour. That’s a lot better than what my friends were making at the grocery store!

Unfortunately, things were not as simple as I thought they’d be. Now, everyone in IT knows this by heart – but as a 17-year-old kid just starting out, I had yet to learn this lesson.

Now, UStream did indeed work as advertised. Hook a webcam up, link its feed to UStream, and off you go.

However, that was the only part of the project that worked initially. In other areas, the problems started to stack up:

In addition to all that, I still had to write the code to embed all four webcam feeds on her website.

Now, don’t get me wrong here – I actually found this whole project to be a pretty fun problem-solving experience. I’m glad I did it.

Still, the scope of the project really crept up on me, and in the end I spent about 40 hours on the project before I got everything working perfectly.

If you don’t feel like doing the math yourself… that translates to $1.25/hour. 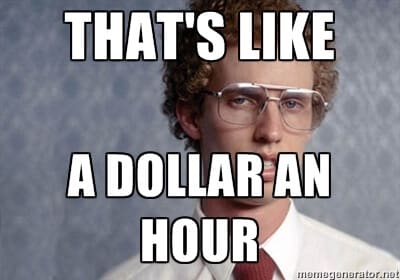 I had based my price for the job off of my perceived ease of the work – which turned out to be not so easy in the end.

Luckily for me, the daycare’s owner also realized I had majorly sold myself short. So, instead of a measly $50, she paid me over $300 and threw in the Linux computer she now no longer needed.

When you’re just starting out as a freelancer or entrepreneur, you’re likely to make this same mistake. You might even make it when negotiating a salary for your first job out of college (if you have that privilege).

However, you may avoid making quite so big a mistake as I did if you just remember this concept. The price someone pays for something should reflect the value they get out of it.

I was talking to my friend Andrew the other day while hanging out in Des Moines. Andrew runs a company that offers Apple product training and support to individuals and companies.

Andrew’s business is just a one-man shop, but he’s doing well because he offers a service that is valuable to a lot of people. Lots of business owners just want to get their computers working ASAP so they can get back to their main business. They’re often willing to pay to get problems fixed fast rather than save money by trying to do it themselves.

Andrew told me a story about one of his customers who called him on a weekend for a printer problem. Within five minutes, Andrew had fixed the problem from the comfort of his own home (it was a software problem).

However, the customer insisted he be charged for a full hour. Why? The customer told Andrew the same thing I’m trying to tell you – he should charge based on value.

Because he got the printer fixed so fast, the customer explained, he could now get back to business – and to making money. That was valuable enough for him to pay for a full hour’s worth of support.

This is the same concept that some strip clubs exploit, as I alluded to in the beginning of this post.

Now, I don’t really spend much time in strip clubs (in a country where prostitution is illegal, is there anything more pointless?), but I’ve been told that some of them will charge exorbitant ATM fees – sometimes up to $10.

That seems crazy – but hey, when a guy’s most basic and primal biological urges are telling him he needs to put green paper notes in very specific places, he’s not likely to ignore them. Even if he’s gonna lose $10 of that money to a very non-sexy ATM box.