I’ve always had too many interests for my own good.

If you’ve seen my Impossible List before, this probably isn’t a surprise; I want to learn how to play the piano, learn to walk a slackline, write a novel, learn how to draw, skateboard more proficiently… the list goes on.

When I walk into Barnes & Noble – which is quite often – I have a hard time figuring out whether to head first: science, biographies, world history, travel, fantasy and sci-fi, graphic novels – they all sound ridiculously interesting. And once I’ve picked a section, picking an individual book is even harder.

My professional life isn’t shielded by this excess of interests, either.  I have to stop myself from chasing after new podcast and YouTube channels all the time. And I really have to get tough on myself with the itch to start coding again comes around…

So if you feel like a man sentenced to die in that ancient method of having each of your limbs tied to a horse going in a different direction – except they’re baby horses and you’re just stuck in the middle, being pulled in too many directions at once to go anywhere – don’t worry. You’re certainly not alone.

We are inundated with opportunities more than ever now, and unsurprisingly, it can cause us to have some trouble picking one and focusing on it.

This problem is often referred to as the “paradox of choice”. Sheena Iyengar, and professor at the Columbia Business School, exemplified it well when she said:

“There are times when the presence of more choices can make us choose things that are not good for us. For me, the clearest example is that the more retirement fund options a person has, the less likely they are to save for their old age.”

Unless you join the army, go to jail, or spend most of your life on an airplane with no wi-fi, the presence of this excess of choice is here to stay. So how do you start narrowing down your choices and interests to the point where you can focus on a few long enough to make progress? 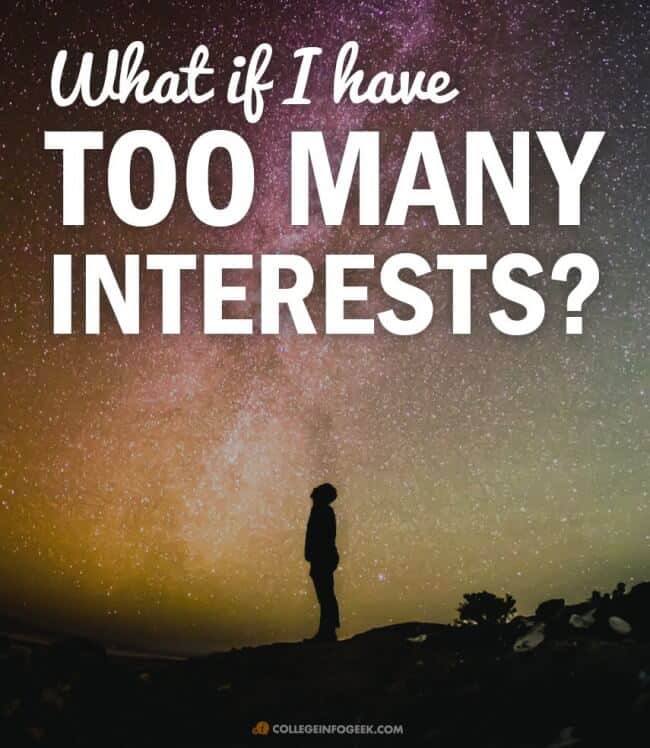 There’s a story about the billionaire investor Warren Buffett that I read about on James Clear’s blog a while ago. It details a conversation between Buffett and his personal pilot, in which the pilot was asking Buffett how to choose his career priorities.

To help the man focus, Buffett told him to go through the following exercise.

Step 2: Review the list and circle the top five most important goals.

Now the pilot knew he should start working on the top five as soon as possible. But then Buffett asked him:

“What do you think you should do with the goals on List B?”

The pilot replied that these goals were still important to him, so he’d work on them intermittently – while still trying to keep most of his focus on the top five.

Buffett replied, “No, that’s the wrong answer. The correct answer is…”

Step 3: Treat List B as your Avoid-at-All-Costs list. These items should get no attention until you’ve completed your top five.

Now, I’ve read in several places online that this story is fake. However, even if a famous person like Warren Buffett didn’t give this advice, I think it’s fantastic.

The problem with the items in List B is that they’re still interesting. Because of that, it’s likely that they’ll pull your focus away from the most important goals if you let them. You have to cut them out completely if you want to make real progress.

I think you could get a lot of use out of going through the exercise from the Warren Buffett story… but I’ve got something even better to share with you today.

For a few years, I’ve been following an awesome guy named Derek Sivers. Derek is a guy who has been inspiring me for years; he founded a hugely successful company called CD Baby that supports independent musicians (and which my friend Martin used to get his excellent rap EP on all the major music sites), he’s an excellent public speaker, and he has an awesome book notes section on his website.

Last week, I saw Derek tweet out a new page he’d put up on his website called What I’m Doing Now. 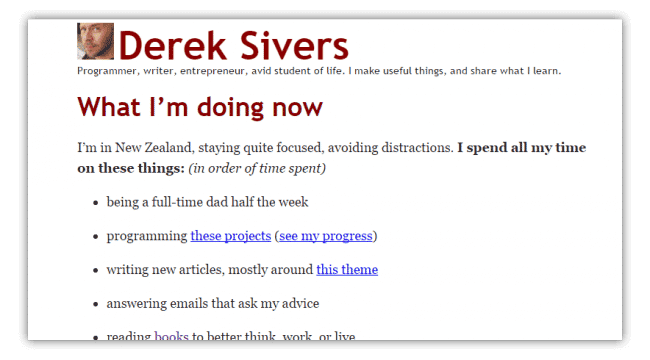 The page is short and simple; it states what he’s doing with his life right now, makes clear that those things are his main priorities, and informs visitors that he’s not interested in taking on other opportunities because of that.

I love this concept:

For a while, I had a “Current Focuses” section on my Impossible List, where I listed the goals on the list that I was working on at the moment.

So I’ve decided to become part of the “Now” page movement that Derek has started. If you’d to see what I’m doing at the moment, here’s my Now page.

I do want to highlight one difference between Derek’s page and my own. Whereas Derek’s states:

“People often ask me to do other things. I sincerely wish them the best, and often wish I could help more, but I say no to all requests, because I just need to focus on my work.”

“I am open to considering new opportunities, as I highly value novelty, spontaneity, and growth. However, I aspire to stick to my priorities 90% of the time. As a result, I will say no to the majority of requests that come my way now.”

I decided to write mine this way because I do want to consider new opportunities. I get bored quite easily when I do the same thing for a long time – even if it’s a very creative activity like making videos. I relish opportunities that come along to shake things up.

However, I also realize that the vast majority of my time should be spent focusing on my priorities. To me, this statement reflects an attempt at a balance between the two. I want to make it clear that people are free to send new opportunities my way because I will consider them (even if it’s likely I’ll say no).

I also believe remaining somewhat open to new opportunities is a good choice for the point I’m at in my career. Derek has been a professional musician, written books, built, managed, and sold a company with many employees, and spoken at TED (yes, actual TED). In comparison, I feel as though I’ve just started.

Create Your Own “Now” Page

If you think a page like this might be useful, I’d encourage you to create on for yourself!

You could put it on your personal website (here’s my tutorial on how to build one), or even just write it up in a Word document and stick it on your wall.

If you do create a public one, I’d love to hear about it in the comments. Derek also set up a website that lists all the Now pages he knows about, and you can email him to have yours added if you want.

In any case, my challenge to you today is to write our your priorities in some way. By doing that, you’ll have a constant reminder of what you should be focusing on.

Find that focus, plan out each day with it in mind, and get yourself into Robot mode.