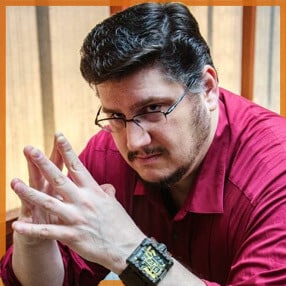 I love this episode, but it’s not one that I can market very well.

It’s a long conversation that jumps randomly between many different topics, going off on tangents and down rabbit holes, jumping from layer to layer and venturing off into the weeds at many points.

And to be honest, that’s the kind of podcast episode I love. I feel like I learn best just by having interesting conversations with smart people, and as of late, all the podcasts I’ve been listening to emulate that for me (namely Hello Internet and Cortex). So I’m happy to have another episode of that sort on my show (episode 50 with Satchell Drakes was the first).

In my defense, though, I did go into this episode with a mission in mind.

Over a year ago, I read a blog post called “You Must Try, and Then You Must Ask,” which was written by Matt Ringel, as senior network architect at Akamai Technologies (a huge tech company based in Massachusetts).

In this post, Matt described a rule that his company has in place for when you get stuck on a tough problem. This “15-minute Rule” is simple:

I loved this rule, because it forces people to really think about a problem once it gets tough – instead of immediately giving up and asking for help, which is what I saw many of my classmates and co-workers do during my college classes and part-time jobs.

So my mission was this: First, I wanted to talk with Matt and go into the 15-minute rule in a more in-depth manner.

Second, I wanted to ask him about a question I often get from students doing internships and recent grads just starting their first full-time jobs:

“How long should it take for me to get good at m job? I feel like I’m completely out of my depth right now, and I’m worried my boss is going to fire me.”

Both missions are accomplished in this episode, and if you’ve had that same question tumbling around in your head and causing you anxiety, this episode holds the answer to it.

Along the way, though, you’ll get a long conversation that touches on all sorts of things – how our brains learn and piece together information, Magic: the Gathering stories, and more. I hope you enjoy listening to it as much as I enjoyed participating in it.