“For so many language learners, the motivation to learn a language is more often than not extrinsic rather than intrinsic. They have no true passion for the language; their only motivation is for the side benefits they’d theoretically get from speaking it.”

This early line from Benny Lewis’ book Fluent in 3 Months reminded me of a conversation I had with my dad before the start of my 9th grade year of high school.

My school offered only two foreign languages to study: Spanish and French. Dad gave me a couple of seemingly good reasons why Spanish would be the best pick:

So I picked Spanish and stuck with it during all four years of high school.

I may as well have taken nothing at all.

As that line from Benny’s book suggests, my motivations for taking Spanish were purely extrinsic and based on the perceived benefits I thought I’d get from knowing the language, like:

Well, as it turns out, I did reap that third benefit. The second probably would have been useful in a different major, but in mine the credit didn’t count for much.

Still, do you see the problem? None of my motivations had anything to do with using the language. And so I failed to actually learn Spanish.

Today, I can conjugate some verbs and say simple sentences like, “¿Dónde están mis pantalones?” However, I’m nowhere close to the level my roommate is at, and I definitely didn’t retain enough to justify four years of classwork.

Contrast that to a small event that happened last summer at Disney World’s Epcot park. Being the nerd that I am, I insisted that we go straight to the Japanese portion of the park the moment we got there.

Here is where the my favorite and most vivid memory of using the Japanese language was made. It was an incredibly small event, but as I waited for my food to be made at the “cheap” Japanese fast food place there, I was able to have a short conversation with the waitress, who was a student from Japan.

I was able to actually use Japanese – even if for a very short time. And it felt amazing.

Other small memories stand out as well, such as the day I finally was able to read the katakana menus at a Starbucks in Tokyo and order my drink completely in Japanese.

These are the real reasons for learning a new language. Communicating with native speakers, immersing yourself in the culture, and doing what you want to do.

They’re much stronger motivators than extrinsic benefits like “being a better job candidate.” (if you want to do that, here are 97 tips)

Fluent in 3 Months – the Book 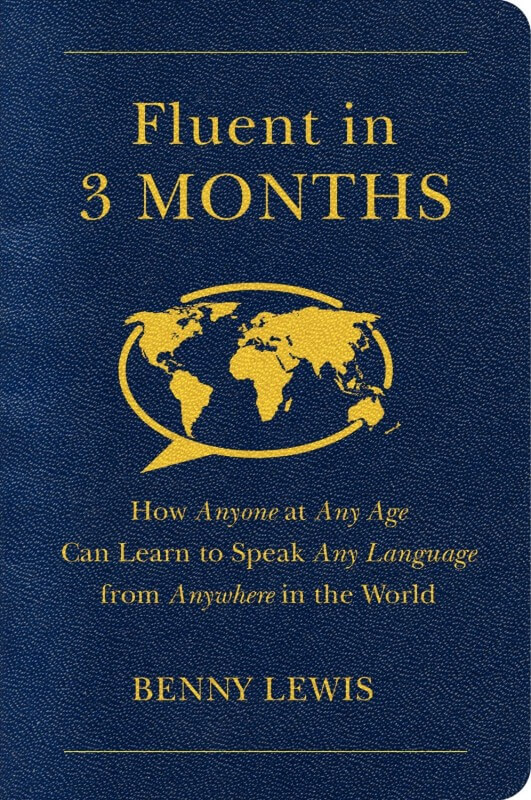 I’ve been a huge fan of Benny Lewis’ blog Fluent in 3 Months for quite some time; in fact, reading his advice and following his travels are the main ways in which I discovered the correct mindset to approach language-learning.

Benny is incredibly dedicated to the mindset of learning what you’re passionate about and immersing yourself in local culture. In the last 10 years, he’s travelled all over the world and learned 12 languages.

Aside: I had the opportunity to interview him for the podcast recently – you can listen to the awesome interview here.

Needless to say, he’s a great guy to listen to if you’ve committed yourself to learning a language. So when I learned that he was writing a book, I immediately hit up Amazon and pre-ordered it.

Fluent in 3 Months is that book, and this blog post is my “review” of it, in a way.

Now, I’m not super-good at being critical of things, which is why I longer do music reviews and instead prefer to build huge playlists now.

That being said, I should at least give a short verdict on the book now that I’ve read it. Here are my judgements in the two categories that actually matter:

Overall, I think this is going to be a very useful book for anyone trying to learn a language, which is why I gave it 5 stars over on Goodreads.

That being said, what I’d really like to do with this review is summarize a few of the best lessons I learned while reading the book!

1. You Should Speak From Day One

“Studying for eons until some vague ‘I’m ready’ day is not the way to go about it. Speaking the language out loud with a real human being, whether in person or online, every single day is the best way by far to zoom forward toward a conversational language level and onward to fluency.”

Remember that Tarzan movie from 1999? Yeah, it was awesome – especially with all the Phil Collins songs.

Right now, though, I’m remembering Tarzan and Jane’s first conversation, where they awkwardly try to communicate. Circumstances aside, Jane doesn’t immediately drag Tarzan back to the tent to start him on learning English grammar rules.

First, they simply try to speak to one another. And it works, even if only a little.

This is what communication is all about. Speaking a language helps you to learn it quickly, and also (in my case, at least) supercharges motivation to keep learning.

However, speaking is scary. Faced with the prospect of actually trying to talk to a native speaker, people come up with all sorts of excuses:

Fluent in 3 Months dedicates an entire chapter to speaking right away, and provides some strategies for getting over the problems that people face when they do so.

The book goes over preparation strategies, how to “cheat” when you don’t know a word, and a great trick for rephrasing sentences to keep the conversation flowing. I also took to heart the advice on appreciating any conversation, even if it’s very small:

“Think of these early exchanges as your first successful conversations in a foreign language. Maybe the exchange lasts twenty seconds, maybe just ten.”

These small wins are what create the foundation for longer conversations you’ll have down the road. My Disney World conversation didn’t last long, but it definitely strengthened my confidence.

2. You Can Immerse Yourself in a Language From Home 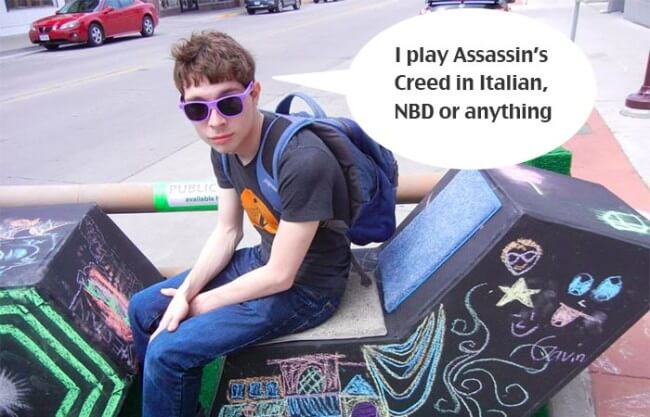 “Many challenges may prevent you from speaking a language, but one I want to squelch right now is the idea that you can’t speak a foreign language unless you’re in that country.”

I studied almost no Japanese before visiting Japan for the first time back in 2012. My only attempt at learning some of it was playing My Japanese Coach on my Nintendo DS for a couple hours on the plane.

Now, I suppose learning how to say “yes” (はい) and “no” (いいえ) were marginally helpful, but I definitely could have started studying the language back in Iowa. In fact, Iowa might actually be a better learning environment for Japanese than Japan!

Benny’s book talks about the “expat problem”, in which people travel to a new country only to find themselves spending most of their time hanging around with other travelers and expatriates who also speak English. In this way, they never get around to learning the language of the country they’re in.

The reason this “expat bubble” is so good at keeping you from learning a language is that the friendships within it are seemingly easier to come by. You can already speak their language, after all!

But then you find yourself spending all your time with those people, never branching out and meeting native speakers.

When I was in Japan, one of the friends I was with told me about a guy he knew who lived in Tokyo for 9 years. During that time, he never learned Japanese.

Along with the expat problem, another difficulty that comes with being in a new country is that you’re often busy. If you’re there for travel, you’re probably going to be spending so much time seeing/doing things, figuring out the train system, finding hostels, eating, etc. – that you’ll never have time to actually study.

At home, this isn’t a problem. The book goes over several techniques and resources for immersing yourself in your target language right from your home town, where you’ve generally got an established infrastructure and time to put into studying/speaking.

Using resources like Meetup to find local language-learning groups, as well as sites like iTalki and Lang-8 to find conversation partners (and tutors) online, you can actually do a lot of speaking from pretty much anywhere.

You can also use media in your target language – books, podcasts, movies, anime, games – to keep yourself immersed as much as possible.

Benny’s friend Khatzumoto – the founder of All Japanese All The Time – used these techniques to learn Japanese while living in Utah. Within 15 months, he had learned enough to land a job in Tokyo!

“In ancient Greece, the idea of memorizing through associative techniques (like mnemonics) was actually quite normal, but this was replaced in modern times with… well, nothing really.”

Benny’s book ironically goes on to explain that books are themselves the culprits in mystery of why we’ve lost our tendency to be so good at memorization since ancient times.

Before books, people pretty much had to memorize everything. Lessons were always oral, and people passed down stories and traditions in this way as well. For that reason, ancient peoples had better techniques for memorizing things that what we typically use.

Now that books are widespread (and this trend is only exacerbated by the Internet) we don’t really need to memorize things anymore, since we can look them up.

Case in point: I had too Google the spelling of “exacerbated” when I wrote that last sentence. So yeah.

When I took Spanish, I remember being handed sheets of vocabulary I was supposed to memorize. The technique recommended for studying this vocabulary? Flash cards…. whoopeeeeeee.

Our brains are connection machines. They connect ideas to other things. They’re tuned to remember things that are vivid, fantastic, and out of the ordinary. They’re tuned to pay attention to tigers. Letters, not so much.

A set of symbolic characters (an alphabet) that you learned when you were four years old is no longer vivid or fantastic, so how do you expect to learn that a certain combination of those characters means “pool” in Spanish just by repeating it over and over?

Eventually it’ll sink in… but there are much better ways to do it.

Benny’s book first mentions the keyword method for learning words, which is based on the idea of making associations with things you already know, or dream up. Some examples:

Other techniques covered in the book include spaced repetition (which I’ve talked about before), using music to memorize phrases, and techniques for memorizing minute-long speeches and intros.

(One technique that’s not in the book, but that I’d like to mention as well, is Martin’s OVA technique to learning everyday words – if you’re currently learning a language, it’ll definitely help.)

The book offers other chapters that cover different subjects in language learning, including a chapter that offers tips on a handful of specific languages.

However, Fluent in 3 Months is not a book that will teach you a specific language. It’s not a textbook, and you won’t become fluent in any language by reading it.

What it does offer, though, is a fantastic starting point for any language learning mission. I think the book does a very good job of solidifying the correct mindset to approach language-learning with, squashing excuses, and pointing to great resources and techniques for making learning easier.

For these reasons, this book will definitely benefit you if you’re wanting to learn a new language. Highly recommended.