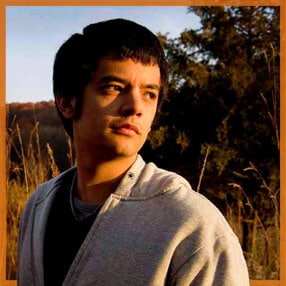 Bud Hennekes is one of the best friends I’ve never actually met in person.

He’s also super-passionate and talented dude who has a knack for making connections with amazing people and going all-out to achieve ambitious goals.

Having lived in Shanghai, New York City, Missouri, and now Chile, Bud’s packed a ton of experience into his life – even though he’s only been out of college for a year.

Now he’s working on building the Exosphere program, which is a boot camp of sorts for people who want to challenge themselves and gain an entrepreneurial mindset.

I met Bud on Twitter a couple of years ago, and since then we’ve had a ton of great conversations, given each other feedback and advice, and become great friends. As I said before, though, we’ve never actually met in person.

That’s one of the key takeaways from my conversation with Bud in this episode relates to this: social media is an incredibly powerful tool you can use to build meaningful, inspiring relationships with people who might live thousands of miles away.

This is how it all started, actually:

@Aboundlessworld hey man, just found your blog and it’s awesome! Also, I think you go to the same school as my friend @JeffBajayo

In addition, social media is also a tool that can help you land an awesome job.

In fact, in this episode you’ll hear Bud’s story about how he was able to land his dream job by using Twitter – as well as travelling over 1,000 miles for a 5-minute interview.

Bud also shares the two incredibly smart strategies he used to make sure he’d be the best possible candidate.

A couple great quotes from our conversation:

“Think about how you can create value for whoever you’re wanting to work for right up front – no strings attached.” | Tweet This

“Don’t hesitate to try something for fear that it’s not going to work out.” | Tweet This

What you should do right after listening:

If you enjoyed this episode, give the CIG podcast a review on iTunes!