If you want to make things that are amazing – things that become successful and well-known – then you have to make a lot of things.

That’s the takeaway for any success-minded person who hears of the Equal Odds rule, which essentially states:

What this means is that scientists who do publish very significant things also publish things that go unnoticed – and this is because they publish lots of things.

This rule, I believe, applies to anyone who does creative work as well. Sometimes the things you make will suck or be ignored. Most of the time, they’ll get average exposure, or you’ll feel they’re of average quality.

Occasionally, though, you’ll drop a golden egg. The more work you do, the more often these golden eggs will come.

My own YouTube page provides a pretty good example of this rule. Take a look: 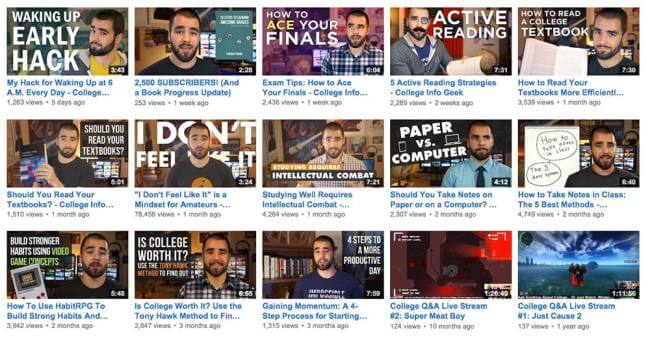 Since starting my commitment to make regular videos with Gaining Momentum near the bottom until right before this video, I’ve made 13 videos. That’s over the course of about three months.

The view counts offer up a pretty good demonstration of the Equal Odds rule; most of my videos have an “average” amount of views. A couple of them did worse than average.

One video, however, did massively well compared to the rest. That’s the one on how to get over the “I don’t feel like it” mindset, and as of this writing it’s been watched over 78,000 times.

Here’s the thing, though – I would have never made that video if I had not committed to making videos regularly. I had to make all those other ones – average and poor alike – to get to the point where I’d make one that was a hit.

That’s the gist of the Equal Odds rule – for more, check out the video!

I’ll be making a video next week on how to get massive amounts of work done on a regular basis, but I already told you one of the strategies: stick to a schedule. Doing this helps you to limit your choices when you’re in Doing/Robot mode, which cuts down on procrastination.

An easy way to do this is by using HabitRPG, and you can join the CIG guild for even more motivation.