I have a horrible secret to tell you guys. I was going to write some clever introduction that would possibly lessen your inevitable horror-driven recoil, and possibly even lessen the chance that you’ll hate me forever, but that seems unlikely to work. So I’m just going to divulge it now.

Alright. Secret’s out…. huh. I seem to have the same amount of Facebook friends. Maybe this wasn’t the worst idea ever after all…

Fan fiction gets a pretty bad rap, and honestly, it’s quite deserved. Most fanfic these days is nothing more than the wishful writings of teenage girls who have nothing better to do than “ship” their favorite characters together. Anyone up for 200,000 words on Katara and Zuko’s wedding and subsequent sexual exploits? Shoot me now.

What little fanfic that isn’t unrealistic shipping attempts is either poorly written, poorly edited, or both. It’s all worthless trash, and any time spent reading it is a disservice to real authors who actually take the time to build their own universes.

Since I’ve already outed myself, I feel I should justify my reasons. Don’t worry. I’m not sitting in the back of a 15-passenger van reading about Misty, Onix, and a sudden Vaseline shortage in Kanto.

Today I present, for your potential reading pleasure, three works of fanfic that are actually worth the kilobytes they take up. They’re creatively written, divert significantly from the original plots of the works they build off of (or eschew them altogether), and just might make you willing to admit you read fanfic as well.

Harry Potter and the Methods of Rationality by Eliezer Yudkowsky 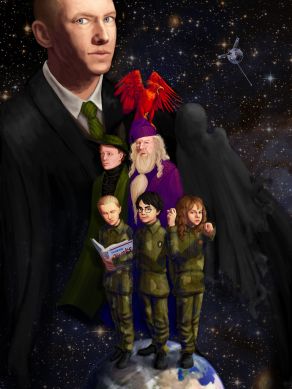 I often hear my friends saying, “Damnit Tom, are you reading that stupid Harry Potter fanfic again?” Since they haven’t given it a chance themselves, they haven’t had time to come to the – very controversial – conclusion I have, which is…

I actually prefer Harry Potter and the Methods of Rationality to the original books.

Now, I absolutely love the original books, but this is more my speed.

In Yudkowsky’s universe, Aunt Petunia married a biochemistry professor instead of a total dolt, and as a result, Harry is a genius child more akin to Ender Wiggin and Artemis Fowl than to his original character. He goes to Hogwarts with the intent of using the methods of science and rationality to unravel the secrets of magic.

What follows is an incredibly entertaining sequence of events, plot twists, and a more than heaping helping of explanations of rational thinking patterns, logical fallacies, and the like. The book is as much an entertaining primer for Yudkowsky’s sequences on rationality as it is a work of fiction.

And that’s ok. Being a fan of authors like Neal Stephenson, I’m totally ok with info-dumps and tangents into psychological studies and rationalist ideals.

There are also plenty of wonderful references to other great works of science fiction and fantasy, such as tons of incoming Muggle-born students thinking themselves clever for giving Dumbledore a copy of The Lord of the Rings as a gift, or a certain wizard using a dark spell called Gom Jabbar that inflicts excruciating pain on the victim’s hand.

The way Yudkowsky diverges from the original work is often brilliant and simply awesome. I won’t spoil anything here, but I will say that Harry’s experience in learning the Patronus Charm is very different than in the original books, and it blew my mind.

HPMoR is a polarizing work, and Yudkowsky states this right up front, saying that if you’re not into it by Chapter 10, you should probably give up. I completely agree. It’s not for everyone.

But if you – like me – are interested in science, logic, reasoning, and other related stuff – if you’re a geek – you’ll probably enjoy it greatly.

Oh, and it’s more than twice the length of Order of the Pheonix, so you’ll have a lot to keep you busy if you do end up reading it.

The Last Ring-bearer by Kirill Eskov 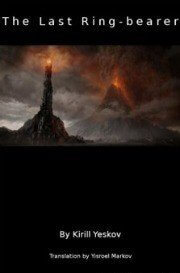 The Last Ring-bearer’s status as “fan fiction” is actually that of considerable debate. Some consider it to be far too divergent from Tolkien’s story to be relegated to such a label – but the fact is that it’s still within the universe of Middle Earth.

The definition of fan fiction is a fuzzy one, and it starts getting hard to decide whether or not to apply the label when you’re looking at books that build upon classic stories, such as The Looking Glass Wars.

I ended up in a slightly heated debate with friends about this definition over 11:30 P.M breakfast at Village Inn one night. It would seem to me that work that uses the characters and universe of an already established work should be categorized as fan fiction.

My friends believed that the term “fan fiction” shouldn’t apply to works that build off of “classic” stories, and thus, The Looking Glass Wars isn’t fan fiction.

The logic in that statement (if there is any) eludes me – Alice’s Adventures in Wonderland isn’t some fairy tale with no definite canon; it’s got a singular author, a publishing date, and everything.

The Last Ring-bearer seems to deserve the fan fiction label more than other works because it’s decidedly free. However, unlike HPMoR, it doesn’t follow the original work’s characters at all.

Instead, this work tells the story of the War of the Ring (and its aftermath) from Mordor’s point of view.

The central idea behind TLRB is summed up in the following quote:

“History is written by the victors.” – maybe Winston Churchill

Eskov’s retelling of the war sees Mordor as an advanced society which values science, reason, and technology over the barbarism and reliance on magic that pervades the kingdoms surrounding it.

Gandalf is a war-monger who seeks a “Final Solution to the Mordorian problem”. The story draws obvious parallels to the conflicts of Dark Ages-era Europe and the more learning-focused Muslim empires within its proximity.

The story essentially operates on the idea that The Lord of the Rings is essentially propaganda put out by the winning side. For a better introduction, check out Salon’s article on the book.

My Immortal by Tara Gillesbie 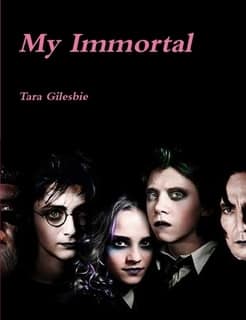 I’m joking. It’s a joke. No, really, I’m just joking. Don’t read this if you value your brain.

Often cited as the absolute worst fanfic of all time, I’m including My Immortal simply for comedy value. Instead of explaining, I simply offer up a choice few lines from the text:

I sincerely hope whoever actually wrote this is secretly a master troll, because I don’t think I can handle living in a world alongside someone who actually thinks like this.

Still, if you ever find yourself in the back of van on an 8-hour drive to a remote part of Wisconsin and have a smartphone, it might provide some laughs -right before your own major intestine, in a desperate attempt to save life and civilization, leaps straight up through your neck and throttles your brain.

…phew. Ok, we’ve gotten through the list. Just make sure you’re very intoxicated before attempting to read that last one.

You know, I only wanted to include one parody entry in this post – but now that I think of it, there’s another piece of god-awful fanfic that simply cannot go without mention…