It’s Saturday. You wake up, the sun is shining through the window pane and a gentle breeze brushes your face gently, waking you up from the deepest sleep. Mmmm, doesn’t that seem peaceful? No, it doesn’t. You know why? Because you decided it was a good idea to spend six hours last night doing jager bombs, whiskey shots, and some other things that didn’t smell quite right, but your friends made fun of you, so you took them anyway. Now the pounding in your head is amplified only by the cheerful singing of a robin directly outside of your window. The sound grinds at your teeth, and the only thing you want to do is sleep until Sunday.

Now what did Timmy do wrong here? (In this particular scenario, the subjects name is Timmy). Well aside from the mystery shot, he forgot the main thing college students forget. YOU DON’T HAVE TO DRINK EVERY WEEKEND! Some of you disagree, and to you I say, good luck. For those that do agree, the age-old problem is deciding what to do instead.

In this first installment of Unbore Me Chris; I’m Sober Today, (Can you believe it only took two seconds to come up with that gem? Me either!) I’m going to be covering the greatest thing you can possibly do in your entire lifetime. GEEK THE HELL OUT! AWWW YAHHHH! Form of board games! *Cue Street fighter song*.

Now, because I can’t just throw you into hardcore geekdom, I am going to ease you into this adventure, and I’ll be your guide. Also, if it helps, pretend like I am speaking with the soothing voice of Barry White, because that is definitely what I’m talking like as I write this. Light a candle, sit back, and enjoy the ride…baby.

Three Nerdy Board Games to Play 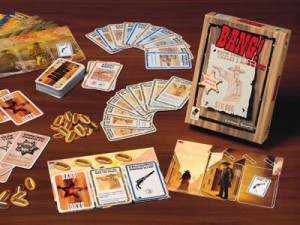 Now in this game, all players get a role and a character card. Each person gets a different character card, giving them specific abilities. It is unique and makes the game different every single time. Now, the roles are what makes the game creative. There is a Sheriff, an Outlaw, a renegade, and deputies. The amount of each of these (except sheriff) depends on the number of players. The sheriff has to kill all the outlaws, the outlaws have to kill the sheriff, the deputy has to make sure the sheriff lives, and the renegade has to murder everyone. The only role known is the sheriff. This gives a huge mystery element to the game, and makes it hard to know who you are attacking. Be sneaky, be up front, or just sit back, it is up to you. Either way, the game is awesome, personally my favorite, and is good for a group of friends. Bang! can be had for around $15 on Amazon. 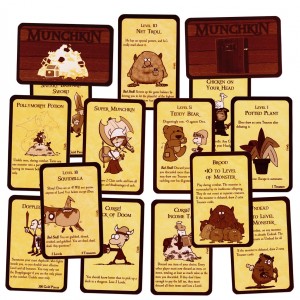 Now, you look at these cards, and go, ohai, uh, I think you pushed me too far into nerd-dom. And to this I proclaim, NAY! The cards are humorously based off of dungeons and dragons, so no capes, no wands, and all social skills welcome (unless you want to include any of these, I don’t judge…pfft loser). You get a munchkin, it gets cool classes like a sexy dwarf, or in some version, a zombie. Oh yah, zombie munchkins rules. You get armor such as “The Bees Knees”, which is a literal bee cover for your knees and so forth. It is not meant to be taken seriously, and the whole point of the game is to bide your time and screw over your friends. You level by killing monsters like Squidzilla, a party hat wearing giant squid, and win the game by reaching level 10. People can interfere and ruin your day. Have at it! Munchkin’s regular edition is also around $15 on Amazon. 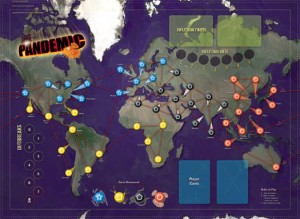 The world has spun into turmoil. Disease is ravaging the world and everyone is dying. Oh don’t worry, It’s not actually happening, that’s just what the game is about. I know, scary. In this game, you work collaboratively to stop a disease. The virus spreads, multiplies, and generally frustrates the crap out of you. This game is hardly every won, but is incredibly fun. You strategically plan where to vaccinate and move medical stations around the country, in hopes to avert the disease, but draw the wrong card and the disease spreads rampant, destroying all your work. This is a good thinking game, and is good to play with friends. Amazon stocks it for around $28, but you may be able to find used editions for less.

Now the great thing about all these games is they are replayable. I try to find a good game night to play these three games at least once a month. They also only cost $15-$30. Finally, they don’t make you want to down a bottle of aspirin to relieve you of that terrible splitting headache. Enjoy!

Editor’s note: On the subject of board/card games, I’d also definitely recommend Fluxx. This rule-bending game is one we’ve talked about it before, but it bears mentioning again.