Earlier this morning, I was scrolling through my Facebook feed and saw a posting that is all-too-common for college students: someone’s computer rebooted in the middle of the night and they lost the massive Word document they’d been working on before they went to be.

Of course, the first comment was, “Save your work bro.”

And of course, the original poster’s reply was, “Gee, thanks for telling me now asshole.”

This, my friends, is why I’m writing this flimsily-disguised rant. I’m tired of seeing people use their computers like morons. I’m tired of people not doing obvious things to protect themselves from easily-avoided disasters.

And most of all, I’m tired of seeing said people complain about their misfortune on Facebook and then get all defensive when someone very rightly tells them why they’re a bonehead and what they could have done.

So here’s my blanket statement, which isn’t pointed directly an any one person but at everyone:

If you lose a large amount work to a computer problem, you were most likely being an idiot. It’s not Microsoft’s fault. It’s not Dell’s fault. It’s not the fault of those three old hags in Hercules that share one eye and cut threads all day. It’s your fault.

Just like they tell people in AA, the first step to fixing your problems is accepting you have them. In the case of losing work to a computer problem, you need to accept that the problem is that you didn’t take necessary precautions. 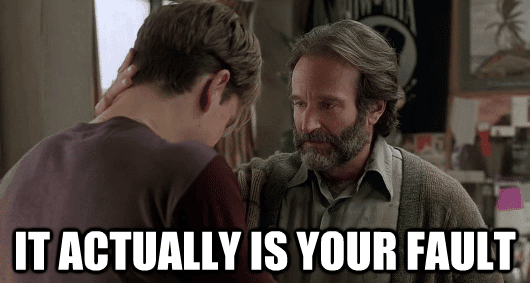 Now, to me, the precautions that should be taken to avoid losing work seem self-evident. However, I’m a computer nerd. Being somewhat of an expert with these marvels of tech, I realize that I probably suffer from the problem of expertise – I assume things are obvious when they actually aren’t. (this is why experts often don’t make good teachers)

Realizing this, I’ve set out to show you exactly how you can protect yourself against losing your work. If you’re reading this, you no longer have any excuse for losing work to a computer failure. I’m going to give you five easy things you can do to make sure you never lose your work. All you have to do is keep reading, and then actually do these things.

This post is sort of Windows-specific. But some of the tips are applicable to you Mac users as well (I use both systems on a daily basis, so I definitely won’t ignore you). Also, not everything on this list is necessarily a tweak, which can be defined as a change to the core system. However, that word sounded cool for the title, so I used it.

Ready to protect yourself from data loss? Let’s jump in.

Here’s a completely made-up, spitballed breakdown of the reasons your computer might reboot itself in the middle of the night and their frequency:

As you can see, the main cause of a Windows computer restarting itself in the middle of the night is Automatic Updates. Before I got un-lazy enough to change this feature a couple years ago, my computer would reboot itself all the time to install updates. Of course, I had all my work backed up already – but it was still annoying.

To avoid unwanted reboots, set tell Windows to download updates only. That way you can install them and restart your computer when it works best for you – not just randomly overnight.

Here’s a Microsoft support article that explains how to do this in case you’re not sure how.

Mac users: OS X does this by default, so you don’t need to worry about your computer auto-rebooting on you.

Whatever your major is, there’s a good chance that you do a lot of your work in one or more of the Microsoft Office products. If this is true, I highly recommend that you enable AutoSave and AutoRecover in each program you use.

These features (which you can turn on together) will automatically save a copy of your work every so often. You can specify how often this will happen.

If you’re using a relatively powerful computer, there’s no reason why you can’t set Office to AutoSave your work every 5 minutes. That way, even if the power goes out or you listen to troll friend and hit the Alt+F4 key combo, you’ll lose no more than 5 minutes of work.

AutoRecover also will try to recover your entire workspace if the program closes unexpectedly. So if, for example, you had an Excel workbook open, AutoRecover will try to open it again just as you had it.

Check out this support article to learn how to enable these essential features.

Note: This is NOT a replacement for manually saving your work. You should be in the habit of hitting CTRL+S often. Do it when you go to the bathroom, do it before you go to bed, and do it every time you think about how much your like Mandy Moore. Just do it. There’s no excuse.

A couple weeks into this semester, I met this cute girl while studying in the library. She was wearing these crazy Chuck Taylor knock-offs with zippers all over them, fake hipster glasses, and a snow hat with ear flaps. She also had a Mac.

Those are pretty much all my criteria for striking up a conversation with someone, so I did exactly that. I’m not sure what we talked about initially, but eventually the conversation drifted over to her Mac – and, of course, the problem she was having with it.

Without going into all the depressing details, I’ll just say her computer wouldn’t really boot anymore. It had suffered some sort of blunt trauma, or soda-induced death, or something (I don’t really remember) – but the point is that it was pretty much broke. On the rare occasion that it would boot, it would only stay on for about three seconds.

Of course, she had every bit of her school work on this computer. And, of course, this was the only place where it was all stored.

So at this point, unless she can find an actual superhero to save her, she’s royally screwed.

Don’t be this girl. This is flipping 2012, people. Use cloud storage.

Don’t read any further in this article until you’ve downloaded and installed DropBox.

If you haven’t heard of DropBox before, allow me to drop some enlightenment on you. DropBox is an application that backs all your files up to the cloud. On every computer you have DropBox installed on, you’ll have a folder where you can access all your files. Every time you save a file, it’s uploaded and synced. You can work on a file on one computer, save it, and open it again on another one to work some more.

Here are a few reasons you should install DropBox:

Seriously, download it. Install it. Use it. You won’t even know how you lived without it.

If you’re in a computer-based major, you’ll probably have more than a few programming assignments where you’ll have to slog through some code. Or maybe you’re just coding for fun – maybe you’re making your own game, or just making a few tweaks to your personal website.

In any case, there will probably be a time where you make a substantial change to your code that you later realize was a major fuck-up.

What do you do? Dive into the code and try to manually fix the bugs and get back to how things used to be? No way, dude.

GitHub – and Git, the program it’s based off of – allows you to keep multiple versions of all your source code. Every time you make changes, you can make a commit and Git will save a snapshot of your project to your GitHub repository. If you ever want to look at how your code has changed, or revert to an earlier version, you can do so with ease.

Does all of this sound like gibberish? Odds are you’re not a programming major.

If only a little of if sounds like gibberish, though, you probably owe it to yourself to dive into the tutorial and start using GitHub. You can also follow me if you want.

5. Use a Freaking Anti-Virus. Actually, Use Two.

This one seems obvious, but there are still a ton of people who don’t protect their computer against infection.

The internet is a big place, and there are lots of places where shady bit of code lurk, just waiting to strike an unsuspecting browser. You need to protect yourself against threats like these.

That’s why you need an anti-virus. Use Microsoft Security Essentials. It’s free, it’s not annoying, and it works. Just install it and have more peace of mind.

Also, use AdBlock. I refer to AdBlock as my “second anti-virus” because many viruses find their way onto your computer when you click on ads that contain malicious code or links to sites that contain it. If you can’t see these ads, you won’t click them. As a bonus, you’ll be able to browse the web faster since your browser doesn’t need to load ads.

Now It’s Up To You

As I said at the beginning of this post: if you’re reading this, you no longer have any excuse for losing your work due to a computer failure. All you have to do now is actually take action and do these things to protect yourself.

P.S. – Send this to your bone-headed friends as well, so they don’t lose their work either. Together we can make the world a better-protected place, and cut down on all these annoying Facebook rants at the same time.