HabitRPG is one of the cornerstones upon which I’ve built my system of productivity. Every day, I use it to track my habits.

It’s been incredibly helpful in motivating me to drink more water, read daily, take vitamins, and do a lot of other things. However, I’ve now taken my use of HabitRPG a step further. Now, it’s my workout tracker as well.

When I started using the app, I simply created a daily habit called, “Hit the gym.” Having this in my Dailies worked well for a while, but eventually it stopped being as effective as I’d like it to be. To explain why, I should probably tell you a bit how HabitRPG works first.

When you check off any of your Habits, Dailies, or To-do’s, your character will earn experience and gold. Fail to do Dailies and you’ll lose health. From there, it’s much like any other RPG – you can form parties, go on quests, find treasure, buy gear, etc.

If you want to learn more about the app in general (and how it uses the same smart motivational systems as Pokemon), watch this video I made about it:

As I said, I made “Hit the gym” one of my Dailies. Here’s the problem with that, though: Many of my other dailies were easy things, such as:

You’re able to designate a difficulty for each daily, so setting my daily workout to Hard did bump the experience I’d gain from it over other tasks – but still, I found the rewards for “Drink water” and “Hit the gym” to be far too similar. For me, hitting the gym is much harder.

There was another problem as well: Extra effort in the gym wasn’t rewarded. So I’d go to the gym, but often get to my 2nd round of sets and then not feel like completing the 3rd.

Now, having grit and ignoring the “I don’t feel like it,” thought is the most important thing for getting over this problem, but I believe building in rewards for extra effort is useful as well.

So, keeping that in mind, here’s my new system for tracking my workouts in HabitRPG: 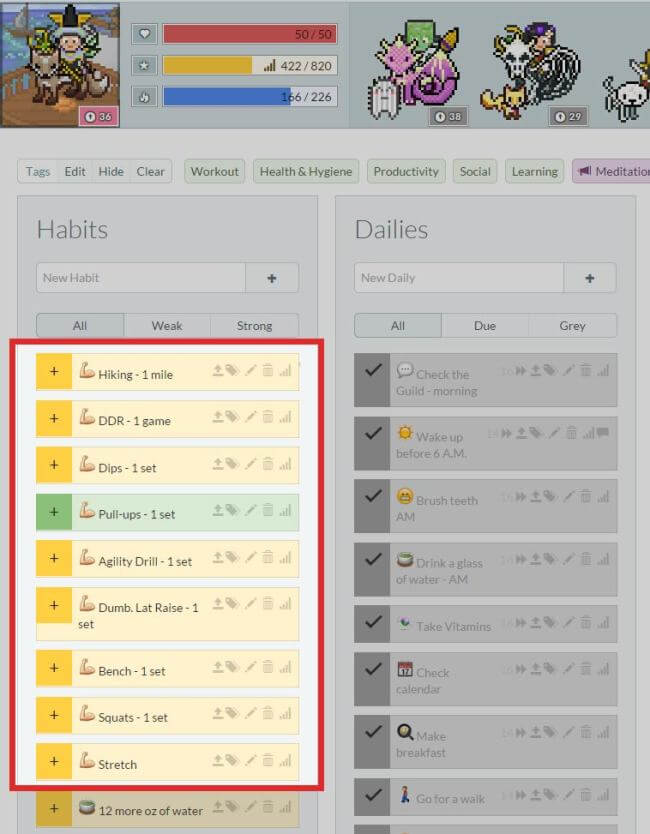 Instead of using a daily to simply track when I go to the gym, I’m now using the Habits column to track individual exercises.

By doing this, I’m training my brain to associate an award with each set that I do. As a result, the temptation to quit a workout earlier is much lower.

This setup brings back some of the ridiculous motivation I used to get from Fitocracy; when I was using that app, I’d often stay in the gym far longer, doing more sets in order to maximize the points I’d earn from each workout.

So why, you might ask, am I not just using Fitocracy for this?

In my recent podcast interview with Mike Vardy, we talked about how productivity is really something that’s different for every individual. One of the key takeaways from this realization is that you don’t have to shove your life into one system.

Lots of people (myself included) have felt like they needed to use one app for everything – otherwise their productivity system would be disorganized and inefficient.

This simply isn’t true; rather, the best productivity system is whatever works for you – even if it’s spread across multiple systems, apps, or sticky notes.

However, I think that you can eventually get to the point where you’re using too many systems. At a certain point, as my friend Chase Reeves would say, the “work about the work,” ends up taking far too much time.

Additionally, every added system in your productivity setup introduces friction – added steps you have to take in order to get things done. This is why Cal Newport advocates simply using a pen and paper for everything – there’s almost no friction.

Using nothing but pen and paper doesn’t work for me, but I did find that using a lot of systems gradually wore away my motivation.

As a result, I eventually quit using Fitocracy. At the time, I was using Lift for habit-tracking, and it was just too much of a pain for me to go to a separate app to log all my exercise.

Friction is good when you’re trying to break bad habits – you’ll waste less time on the internet if you block your favorite time-wasting sites, for example – but you want to eliminate it when trying to build good ones.

Integrating my workout tracking into the app I’m already using to track my other habits reduces that friction, so I’m more likely to keep up the habit. I log into HabitRPG every day without fail due to my morning routine, so I see those habits waiting for me to do them every day. 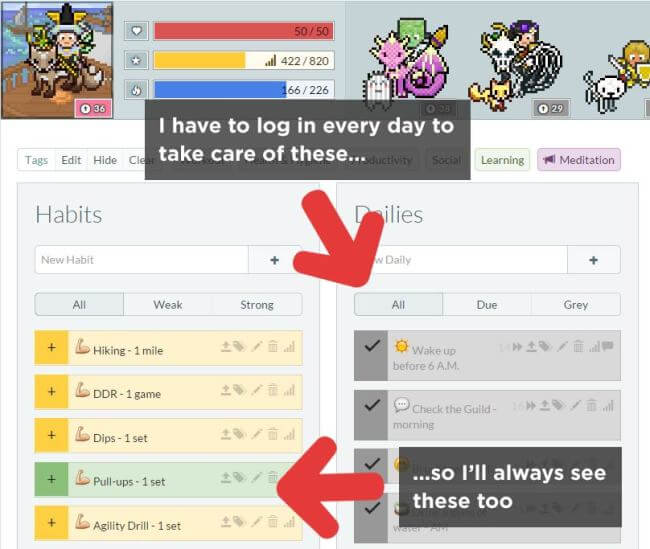 Friction is also reduced by how the Habits column works. I’ve just added the exercises I regularly do as habits, so I don’t have to look them up or create rigid routines. When I do a workout, I can easily check off each exercise for each set I did.

This is a pretty new system for me, but I think it’s going to work well going forward. However, since you may be considering it for yourself, I do want to mention that it’s not perfect.

The main weakness of this system is that it doesn’t track your actual progression for each individual exercise.

Whereas Fitocracy lets you record how much weight you used, how many reps you did, and other data, HabitRPG wasn’t built with workout-tracking in mind. You won’t be able to record any of that data in HabitRPG, so it won’t be able to tell you, say, that you benched 20 pounds more this week than you did last week.

For me, this is just fine. These days, I don’t feel the need to record individual statistics for every exercise I do – I’m more concerned with just working out consistently. With all my other goals for growing my business, creating weekly content, writing a book, etc, it can start to get overwhelming when I’m trying to track literally everything.

So simply checking off that I did a set and getting a reward for it in HabitRPG is enough for me.

If you still want to use this system, but want the benefits of tracking your workout data as well, you could always bring a notebook and pencil to the gym with you. Like Cal Newport says, there isn’t much friction in using paper.

A smaller weakness is that, if you do lots of exercises, your Habits column might start getting pretty long. I mitigate this in three ways:

The third thing I mentioned – using the icons – also helps to personalize my HabitRPG system, which is important because autonomy and feelings of control are vital in building strong habits.

I created a guild for College Info Geek readers a while back, and recently I opened my personal HabitRPG party up to anyone who want to join (so long as they do their dailies). 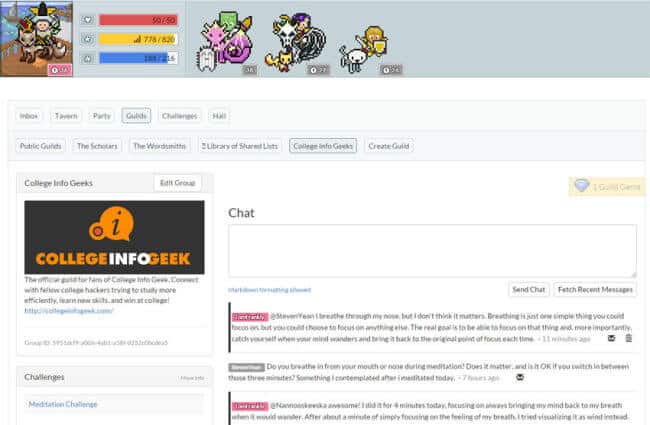 The party system is one of HabitRPG’s smartest features, because it creates social pressure. Normally, failing to do your dailies will cause you to lose health. However, if your party is facing a boss in a quest and you fail to do your dailies, the boss will damage everyone in the party.

Having a party makes it so I definitely do my dailies every day, but it also creates an extra incentive to work out more; the more times I check out a habit, the faster we’ll be able to complete certain types of quests.

I’m excited to see how this system performs going forward, and I’ll be tweaking it as I learn more about how habits work. Is this a system that you think would work well for you? Let me know in the comments!

Also, if you want to the join the CIG guild – where you can take part in challenges and join parties with me or other readers – you can do that right here.