This is a guest post by Shep McAllister, one of my close friends and the former editor of HackCollege.

Students have often asked me if they should get an iPad. Since I first got my hands on an original model, my answer has always been:

The new iPad doesn’t change that assessment. It’s still a luxury item. You will almost certainly need a laptop or desktop to go with it. It won’t fundamentally change your academic experience.

Caveats aside though, the new iPad has absolutely improved as a college-oriented device, and any student who owns one will undoubtedly use it on a daily basis, both for business and pleasure.

Here is my take on the new iPad’s usefulness in three categories – reading, writing, and fun.

As a college student, you’re supposed to read a lot.

During my time in school, a majority of my readings were PDF files downloaded from Trinity’s Moodle platform. For my first two years, I read these on my computer, but lacked the self-discipline to focus for more than five minutes without checking Facebook, answering an IM, or managing my fantasy team. On the off-chance that I read an entire class article, by the time I finished it had been chopped to pieces in my mind.

The iPad changed all of that.

iOS, as a modal, rather than window-based, operating system, is distraction-free by design. I would fire up GoodReader (great app, by the way), download my latest readings, and immerse myself for hours at a time.

Part of it was the software, part of it was the fact I was holding the readings like a magazine, and part may have been a subconscious desire to prove that this device belonged in my workflow. Whatever it was, it worked.

The new iPad’s most dramatic improvement for students will be this reading experience, courtesy of the new Retina Display. I could go on about how sharp the text is, or how it somehow looks better than even a printed page, but I won’t. Just go to an Apple Store or Best Buy and see it for yourself. If your jaw doesn’t hit the floor, there may be no saving you. 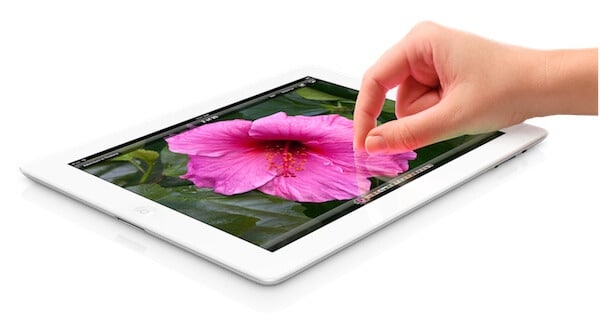 If your goal is to get all of your textbooks onto your iPad, you’re probably going to come away disappointed. The selection of the various competing textbook marketplaces is spotty at best, and prices are often higher than buying the paper version used.

Editor’s note: It’s been my experience that a lot of textbooks are becoming available on the Kindle platform, but they’re only readable on the Mac and PC versions of the Kindle software – not on any portable devices.

If your classes involve a lot of novels and nonfiction though, the ability to download and read books from the iBooks Store, Kindle app, or Nook Marketplace makes the iPad a slam dunk, especially on the Retina Display.

I will admit, the iPad doesn’t offer any dramatic improvements over a tried-and-true laptop when it comes to putting words to paper.

It would take a lot of practice with the software keyboard to be fast enough to take class notes, and it would be tiresome to write an essay on the thing without pairing a bluetooth keyboard, at which point you might as well use a laptop anyway.

This isn’t to say the iPad can’t be useful as a writing accessory. Setting it up next to a laptop offers you the benefits of a second monitor (like displaying research materials while you write on the other screen), with none of the downsides (like the distracting ability to cram your IM, Twitter and email on the same screen).

The rear camera on the device is also good enough to take pictures of book and periodical pages you find in the library. A fringe use-case for sure, but one to consider.

Of course, you’d be doing yourself a disservice if you only used the iPad for schoolwork. You’ve probably seen enough iPads over the last two years to have a sense of the fun things you can do with it, so I’ll focus specifically on the improvements you can expect from the new model.

Games, at least those that have been updated to take advantage of the Retina Display and quad core GPU in the A5X chip, look unlike anything you’ve ever seen. Whether it’s Angry Birds Space or Infinity Blade II, it’s almost a surreal experience to witness the characters moving on-screen without so much as a hint of a pixel.

If you enjoy tinkering with photos, there’s arguably never been a better way to edit them than with iPhoto for iPad. Though it lacks the power and flexibility of Photoshop (though now that’s on the iPad too), it more than makes up for it with unique multitouch editing gestures and clever UI. 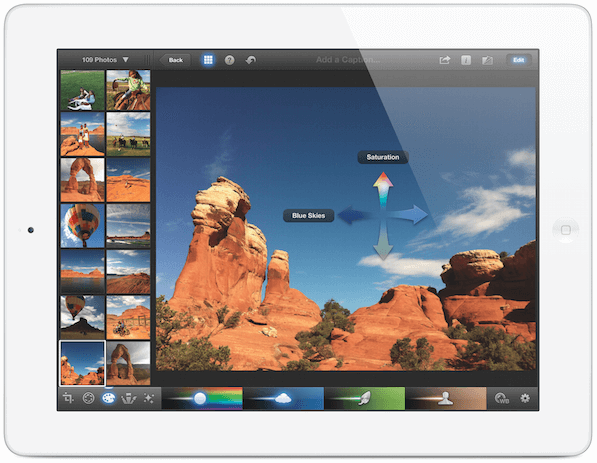 I was always one to dump my raw SLR photos into iPhoto on my Mac and forget about them, but with the iPad, I can’t wait to start touching them up and sharing them.

It should also go without saying that you’ve never seen a digital photo until you’ve seen it on the new iPad’s display. Words simply cannot describe.

Surprisingly enough, I haven’t noticed a huge difference in watching HD video on the device, compared to the iPad 2. It looks better, but not pee-your-pants-with-excitement better. If you’re planning on primarily watching movies and TV shows on the iPad, you could perhaps save yourself $100 and get the older model.

The iPad isn’t essential to you as a student, but it is immensely useful, and the new model doesn’t do anything to drastically change that dynamic.

If you had no interest in using the iPad 2 in college, the new iPad offers little to change that. However, if you were on the fence and considering adding the tablet to your repetoire, there’s never been a better time.

By improving the screen on a device that is essentially a giant screen, Apple made big strides in the device’s beauty and usability, though not necessarily its utility.

You now also have the option of buying a new iPad 2 for $399, which is sure to entice a lot more cash-strapped college students itching for a new toy. My advice though: if you can afford $399 for something you don’t really need, you can probably afford $499 for a dramatically better version. You’ll also probably make up at least the $100 difference if you ever decide to trade in or resell.

A device doesn’t reach a 98% satisfaction rate by accident. Even if you don’t think you’ll find use for it, my recommendation is to give it a chance.