When I was in middle school, I remember receiving this piece of advice from some teacher:

“Focus on making your strengths even stronger rather than dwelling on your weaknesses.”

While I don’t think this is a bad piece of advice in a lot of cases, I’d like to argue against it today.

Telling people to only focus on their strength can have an unintended consequence – they might not discover a new passion or strength. They’ll just keep focused on what they currently know.

You see, what you think is a weakness might not actually be a weakness. It might just be something you have zero experience in. In fact, that’s the more probable situation.

The other day, my friend Leo posted a picture on Facebook. The picture was one of John Gurdon’s grade-school report cards, and it looked like this: 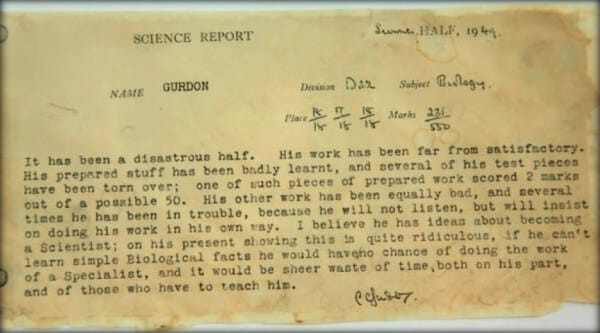 Obviously, Mr. Gurdon wasn’t quite a science whiz in school. Quite the opposite.

If you’ve been paying attention to recent goings-on, however, you’ll know that Gurdon was recently awarded a Nobel Prize in medicine. What does that mean?

It means he got to work on that weakness – and it turned out to be his greatest strength.

I believe that most of our “weaknesses” are simply things we haven’t tried hard enough to master yet. Sure, some of use have innate talent at things that others don’t have, but at the end of the day it’s those who put in the hours that get really good at things. Remember what your high school football coach said:

Your coach might have used that old adage as an excuse to make you run stairs for two hours, but it applies to almost any pursuit you can think of.

I can think of a recent personal example. Just the other day, I finally beat my shoulder press goal and knocked out a 185lb. press. I’ve been training shoulder press for quite a while now, so I was pretty damn pumped to hit that weight.

When I was growing up, I actually had pretty weak shoulders. I remember the day my dad and I were out building a clubhouse in our back yard; it was my job to hold the boards up while my dad screwed them into the clubhouse’s frame. I could barely hold a six-foot 2×4 in place for 30 seconds before my shoulders would start to hurt.

My dad even pointed out how weak my shoulders were – though this wasn’t really out of character, as he probably called me a panzy at least twice a day 😛

Yet, today my Shoulder Press is the only lift in which I’ve attained Advanced Level on the ExRx strength scale. All of my other lifts are still hovering in the Intermediate range.

What was once a weakness is now one of my strengths.

So I’ll just keep this short by saying this:

Don’t dismiss something you try as an innate weakness just because you’re not good at it at first. Keep working at it. If you truly enjoy something, or you want to get good at it, then work hard. Chances are you’ll eventually turn it into a strength.

Is there something you’ve turned from a weakness to a strength? Let me know about it in the comments!