Vincent van Gogh once described the agony of staring at a blank canvas:

“You don’t know how paralyzing it is, that stare from a blank canvas that says to the painter you can’t do anything.”

As a writer, I find the blank page – or, to be more accurate, the blinking cursor – to be just as intimidating.

To avoid the page’s paralyzing stare, I naturally procrastinate. That often takes the form of going to get a snack, browsing Airbnb (even though, ironically, getting to work would get me closer to satisfying that wanderlust), or even cleaning my room – all simply to avoid confronting the dreaded blinking cursor.

This doesn’t work too well if you write for a living like I do, and if you’re a student with a paper to finish… it’s not much better.

Luckily, van Gogh also offered a solution to the “idiotic stare” of the blank canvas:

“Just slap something on it when you see a blank canvas staring at you with a sort of imbecility.”

Which is to say, get something down to make the canvas yours. I’ve found that with writing it’s no different: the key is to start writing something, anything, and the rest flows from there.

If you’re finding the siren song of the internet is pulling you away from your writing, you should try this cool app called Cold Turkey Writer. This app forces you to write by taking over your computer until you’ve written either a set amount of words or for a set amount of time. 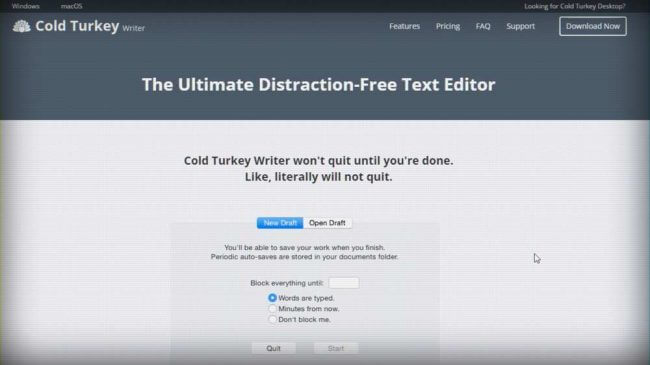 When the app says “block everything,” it’s serious. Unless you restart your computer, you can’t do anything else until you meet your writing goal. Bye-bye, YouTube and Pinterest rabbit holes.

To make this blocking feature most effective, we recommend you don’t set the word or time limit too high. Cold Turkey Writer is most effective for helping you overcome the initial resistance to writing.

Once you get into the flow state, you’ll often find that you don’t want to stop, writing far more words than you’d planned. So pick an initial number of words or amount of time that seems just out of reach.

Cold Turkey Writer is free for Mac and Windows with all the features we’ve discussed today. A Pro version is available for $10, which lets you change the app’s appearance and add some built-in sound effects (and, you know, support the app’s developers, which is cool).

For 99% of people, however, the Free version will be all you need. Here’s a quick video review I made if you want to see it in action:

There’s not much else to say about this app – it does one thing, and it does it extremely well.

Ready to get writing? Download Cold Turkey Writer and start conquering procrastination today. Or, if you’re looking for something else, here are 15 more writing apps.