Update December 2015: Clusterflunk sadly shut down this year. If you know of a replacement, definitely share it in the comments.

12:57 A.M. and you’ve got t-minus 8 hours 3 minutes until you must command your personal collection of bone, muscle, and sinew to march itself to a brick gathering hall.

Here you will regurgitate onto paper a sequence of facts which are supposedly stored as electrochemical signals in a roughly 3.3 lb lump of gray tissue you carry with you at all times.

Unfortunately, these particular electrochemical signals are currently non-existent in your lump of gray tissue. They are unlikely to exist anytime soon.

Fatique has riddled the muscle and sinew, and is currently working its way to the bones. Your six paper coffee cups lay empty upon your desk. One has fallen onto its side.

Only 0.3% of its content has been selected for regurgitation by the professor. Unfortunately, which 0.3% is not easily made evident. Right now all you see is a linearly organized, never-ending sequence of 26 symbolic characters, 6 or 7 punctuation marks, and the occasional number.

Their combinations fail to cohere into anything meaningful, even as your tired eyes dance over them for the sixth time.

Vault the F, slide past the U, dive through the C, and flourish with a mental backflip over the K.

Meaning still eludes you. Storage of facts is just a dream.

You begin to contemplate giving it all up and beginning a new life as a lumberjack.

“A life of beards, pancakes, and Yukon Jack actually sounds pretty good – I’m sure I can learn to love the backbreaking labor as well…”

But then you remember.

Others have stored the relevant electrochemical signals. And one of them…

…one of them is Mother Teresa reborn. She is Gandhi, Jesus, and Oprah that one time she gave away a bunch of cars – all rolled into one. The light among the dark; the giver of hope.

This one student has created a study guide and uploaded it for her fellow students to benefit from.

You find and download it. It is a thing of beauty. Succinct. Brief.

It whispers to you for 20 minutes. Then sleep comes at last. When the sun rises, you wake with a new set of electrochemical signals.

Inside the brick gathering hall, you regurgitate with the best of them.

Swimming Alone, in a Crowd

Five years ago, the story I just related to you would almost certainly be entirely fictional. Even today, it’s still pretty unlikely.

Here’s the problem, broken down:

So, in many classes, you don’t often get the chance to collaborate with other students. You can’t find great study guides written by that one over-achieving girl in the class. You don’t get to ask questions and start cool discussions.

The problem is that schools don’t often provide good tools for helping students connect with each other.

In some classes, a few students might seek each other out and form study groups or share class resources. But this doesn’t happen at all in many classes.

When I was a student, all of the large classes I took in big lecture halls were pretty much an “everybody for themselves” ordeal.

I showed up for class, listened to the professor drone on (usually while doing research for blog posts or reading Bastard Operator from Hell stories), and then headed out.

If the class had a Blackboard site, I could access some resources there. A few classes even had discussion boards, though they were always ghost towns. The platform of choice for collaboration in these types of classes was typically Facebook, which isn’t really geared for that type of thing.

The point: in big classes, you’re a lone fish in a big ocean – without many easy ways to talk to other fish. You can probably talk to your professor (which you should do), but that’s not always enough.

“But the times, they are a-changin’…”

This problem could be a thing of the past, though. New tools are being built to help students collaborate better, and these tools could fundamentally change the learning environment in years to come.

This cool GIF I made represents the current model of a typical college class, vs. a possible model of the future that could be brought about with the help of these new tools:

Each dot is a node that represents one student. Currently, most students are connected only with the professor (the big node).

There’s a quote I read once which has stuck with me ever since. Even though Charles Darwin didn’t actually say it, I still like it:

“It is the long history of humankind (and animal kind, too) those who learned to collaborate and improvise most effectively have prevailed.”

Wrongly attributed though it may be, it’s still true. We aren’t superheroes. Trying to do everything alone is a recipe for failure (something I’m learning with my business as well…)

So any tool that helps us to work together with other students is a welcome one.

Today, I want to introduce you to a relatively new one called clusterFlunk. 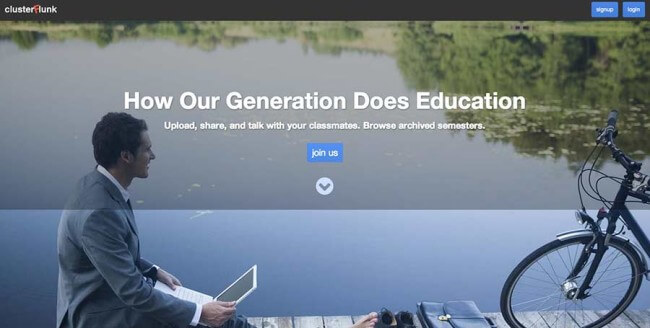 Despite its name, clusterFlunk’s ultimate goal is to help you perform better in classes.

At its core, the site functions much like Blackboard does: You can access class documents, discuss things with other students, and ask questions.

So why use it at all, you ask?

Well, you probably already know the answer – not every class gives you these options. Some teachers don’t set up Blackboard sites for their classes. Many do, but don’t offer discussion boards or post class documents.

A.J. Nelson, one of the site’s two founders (who both happen to be from my home state!), illustrates the problem perfectly in his story on the site’s origins:

Midway through my sophomore year at Truman State University I got a call from Joe Dallago, a good friend of mine since high school. Joe was studying at the University of Iowa and he was just pissed; complaining that he had bombed a test because of one question he couldn’t get on his study guide.

He emailed his professor, his TA and was sitting in the middle of the library but he couldn’t find the answer. There were 400 students in that class and he had no way to talk to any of them. One of his classmates could have probably answered his question in a couple of minutes and he would have been fine.

Faced with this problem, the two students decided to create clusterFlunk to solve it.

Luckily, I found about about the site before my university email expired, so I was able to create an account and check things out. I’m definitely liking what the site has to offer.

Here’s a preview of what a class looks like on clusterFlunk: 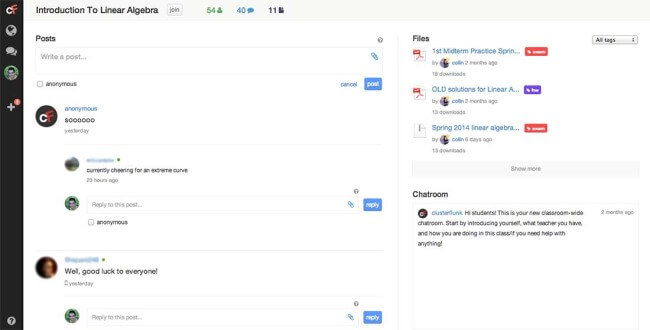 Though its functionality is similar to what you’d find on Blackboard, clusterFlunk differs in several key ways that I believe will eventually make it a clearly better solution.

The School Controls Nothing

You don’t have to be in a class to join it on clusterFlunk. As long as you’ve got a university email address, you can sign up for an account on the site and start joining classes.

Taking a class next semester and wanting to get some opinions on what it’s like from current students? You can join the class and ask. This is awesome, as I often wanted to ask students about classes I was going to take and had to resort to just posting in Facebook groups and praying I’d get lucky.

If you’re in a class that has a Blackboard site, you’ve really only got access to the documents that the professor or TA chooses to provide. Maybe you’ll get slides if you’re lucky, and if the gods truly smile upon you, maybe you’ll get a study guide.

Other times, all you’ve got is the syllabus.

On clusterFlunk, students in the class can upload and share any documents they have. Lots of students posts notes, study guides, slides, and more.

Be as Visible as You Want to Be

If you want to be anonymous, you can be. On the flip side, you can also become a celebrity by participating in lots of discussions, uploading resources, and helping other people out.

Browsing through the site, I’ve seen several students who have a crown icon over their avatars; these students have been recognized for providing lots of help to others.

I would have loved to have a feature like this when I was in school. In a few of the classes that I actually cared about, I took very detailed notes and attempted to share them using a convoluted public Evernote system that never really worked. With clusterFlunk, it would have been much easier.

At this point, clusterFlunk simply needs to keep growing and get more students to use it in order for it to improve. This type of site thrives on user interaction, and in the classes that have lots of users, clusterFlunk is an amazing resource.

According to their Twitter account, the site just passed the 48K user mark around the time of this writing. This is awesome, but there’s still a ton of room for growth and lots of students who have yet to discover it.

That’s one reason I’m writing this review; I think clusterFlunk has a ton of potential and a lot to offer, so I want to get it in front of even more students so it can become a better community. 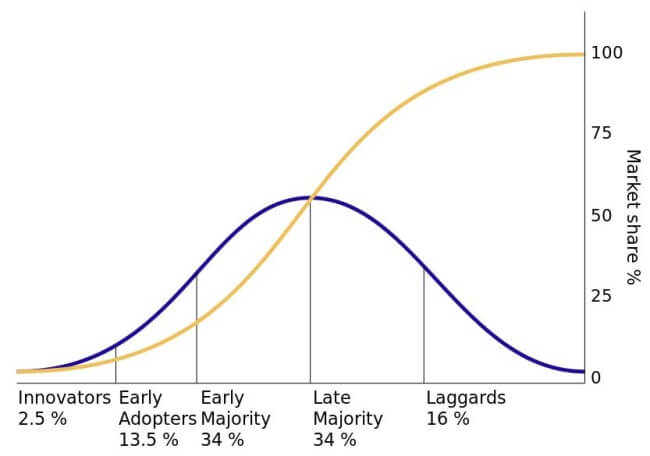 As someone who’s always on the lookout for new and innovative things (here are 21 other startups I’ve been excited about recently as well), I consider myself to be part of the “Early Adopters” group on the curve.

If a site like clusterFlunk can get pushed up to that Early Majority stage, I believe it’d eventually become a ubiquitous tool that’ll help every student have a better college experience.

Since I’m done with school, I can only help give it exposure. Boom, here’s my contribution.

If you’re still a student, or are going to be, I say give it a try (it’ll always be free, according to their website). If you’re at a school where there’s already a large community, it’ll help you in your classes right away. If not, you’ll help lay the groundwork.