Are you planning on plunking down $90 a month for a cable TV package once you graduate or get your own apartment? It seems that many students and members of our generation aren’t planning on doing so – not with other options like Netflix and Hulu offering a more on-demand experience at much lower prices.

Cable/satellite TV used to be a mainstay of almost every American home, and plunking down the big associated monthly fees was simply a part of normal life. However, that was back when our internet speeds sucked, which made watching content online a frustrating option that not many people wanted to deal with.

With internet speeds no longer a problem for most, internet video options have sprung up and are starting to take a bite out of TV’s market share. It’s not just the hip new medium that makes options like Netflix and Hulu attractive; sites like these also offer something cable TV never did: a non-linear experience. No longer do you have to flip through channels and wait for your favorite show to come on; now, you can just log on and watch whatever you want. TV offering have tried to catch up with “on-demand” packages, but these are more expensive and still don’t offer quite as much freedom.

Internet Streaming options also beat out TV packages because, for the most part, you aren’t bombarded by ads for literally a third of your viewing time. In fact, I can’t remember seeing any ads when I watch Netflix content. Even Hulu has fewer ads than TV. Both Netflix and Hulu offer $8/month streaming plans – put that up against a $90 cable bill, and the choice is clear for most.

Personally, I don’t plan on ever paying for TV. The $8 a month I pay for streaming Netflix is more than enough for me; I don’t watch sports, don’t follow any regular shows – really, the only thing I use it for is when I get the random urge to watch a documentary or want to watch a movie with some friends on the weekend. I probably don’t use the service more than 10 hours a month – were I paying for a $90 cable bill for that usage, it’d be almost a dollar an hour.

I’m not the only student planning on skipping out on the TV bill. Yesterday, I asked for opinions on the College Info Geek Facebook page, and I got a good amount of responses. Out of 30 respondents, 21 say they won’t be paying for TV while 4 say they will. Another respondent said he’s “gotta watch foodball” – I’m not really sure what foodball is, but it sounds cool. A few also noted that they’d rather keep downloading content illegally than pay for it at all. 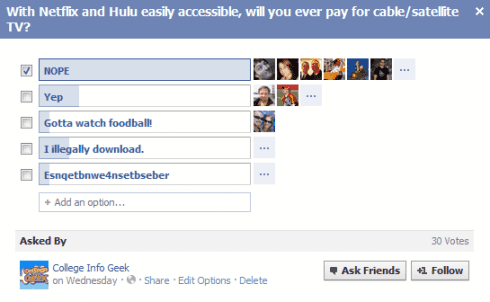 So what’s your opinion on this debate? Will you plunk down the big bucks to get access to sports and 500 channels, or go the internet route and miss out on some of that content? Let me know in the comments.