This is a guest post from my good friend Pam Nguyen, who runs Surviving College (another awesome college blog). So no, I didn’t personally go bungee jumping in Macau – but now I want to 🙂

I am going to tell you a story about one of the most spontaneous moments of my life, which happened when I was on an exchange program at a business school in Hong Kong. (Hong Kong, by the way, is one of the best study abroad locations if you want an opportunity to travel throughout Southeast Asia.)

I think the entire exchange program decided to travel to the Philippines or Thailand that weekend. I had just turned 20 years old, and was one of the people in the group who didn’t go. The remaining 6 of us who didn’t commit to traveling the world that weekend decided to make a day trip to Macau, a Chinese province that is notorious for its casinos, egg tart desserts, and amazing Portuguese-Chinese fusion cuisine.

My good friend Jenny had been feeling a bit rebellious at the time. She was intending to go bungee jumping while we were in Macau without the permission of her parents, who had been funding her study abroad budget. (Insert gasp here.)

Macau is home to the Macau Tower, which is the second highest commercial sky jump in the world. At 731.6 feet, it’s not exactly a beginner’s bungee jump! Jenny didn’t want to do it alone, so she asked the 5 of us if we were up for joining her.

I’m pretty sure everyone else instantly said no, but I hardly gave it a second thought before jumping on board.

I basically gave myself a ferry ride and a cab ride to the tower to mentally prepare myself, and it didn’t hit Jenny or me exactly what we were about to do until we took the express elevator to the 60th floor and signed up. And even then, I don’t think it even hit me.

Not when they weighed us, not when they started strapping us into the gear, not when we were called to stand outside on the platform and do a quick video interview, not when they connected the bungee cord to the middle of my strap and connected it to my feet, not when Jenny jumped before me. It was only when I was finally called up to the jumping platform. 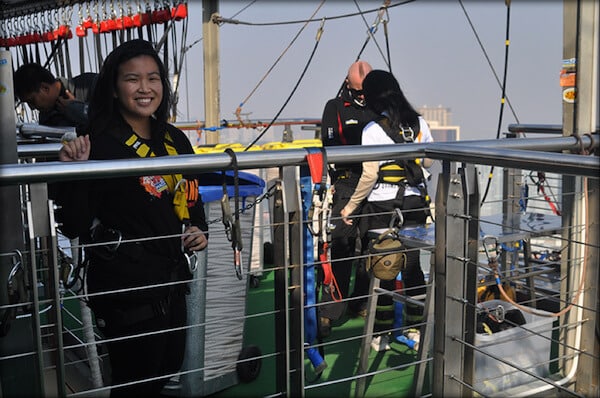 The weight of what I was about to do hit me just then, as they told me to shuffle my feet over to the jumping platform. Literally – the bungee cord I had to bring over with me was heavy. I was suddenly paralyzed in fear as they waited for the signal that I was okay to jump. There were 2 men holding onto my arms, reminding me exactly what I was supposed to do once I went down – I only half-heard them.

My legs were suddenly as heavy as cement blocks; I wasn’t sure I had the energy to lift them when the time came. My heart was ramping up speed as they started counting down from 30. When they finally said 1, I didn’t even jump. I kinda sorta just let go.

The 10 or so seconds of pure free fall you feel, when you feel absolutely weightless, upside down, just staring at the skyline, is the both the most exhilarating and the most peaceful moment of your life. I felt like time stopped, like nothing bad could happen to me.

But then, I hit the end of my cord’s reach, and suddenly I was hitting the height of my bounce. You’re supposed to choose this exact moment to release your bungee cord from your feet so that you can land upright onto the safety pad below. 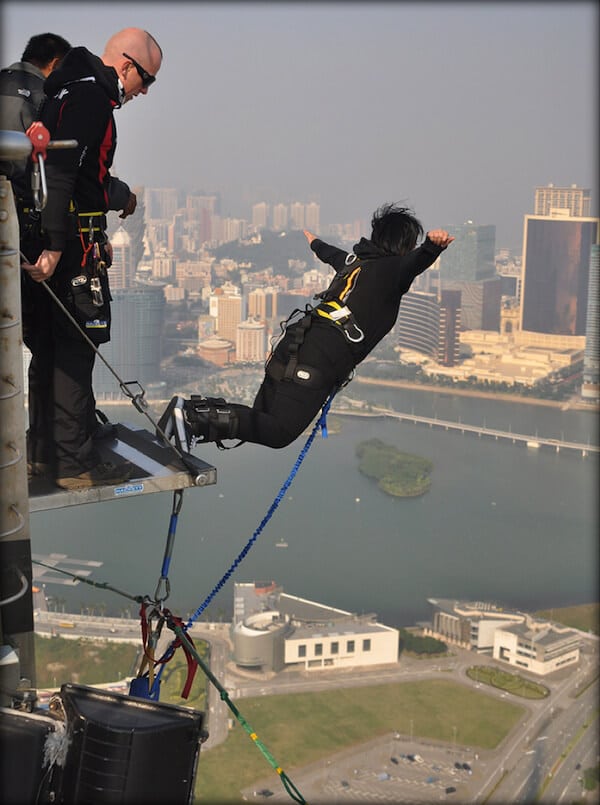 I failed miserably at this. So miserably. It was laughable, how badly I failed! My arms were dead from the adrenaline, and I couldn’t free my feet. Since I didn’t have the power to control the situation, I merely let myself bounce up and down 3 more times, enjoying the shorter and shorter moments of free fall.

The team below eased me onto the safety pad, in all of my upside down glory, and I didn’t care that I failed at such a simple task. It didn’t matter anymore – I had just achieved something so many of my friends would never fathom! I bungee jumped!

1. Spontaneity can be the best personal quality you embrace and cultivate, even if it doesn’t come naturally.

Many people I knew were shocked when they saw that I had bungee jumped. Of all the people they knew in high school or college, they never would have pegged me to do something so… extreme. And it’s true – I wouldn’t have ever bungee jumped with my friend if it wasn’t a spontaneous plan!

Spontaneity may not come easy to you, but letting loose once in a while and just saying yes to something to which you would typically say no can be life-changing.

2. If you’re scared of anything, it is really helpful when you have a supportive friend to help you face your fear.

I’m sure Jenny would have bungee jumped whether or not one of our friends decided to join her. But I am really glad I experienced this with a friend. One of my deciding factors when I froze at the jumping platform (well, besides the fact that I already paid) was that Jenny had already jumped, and if she did, I had to as well! 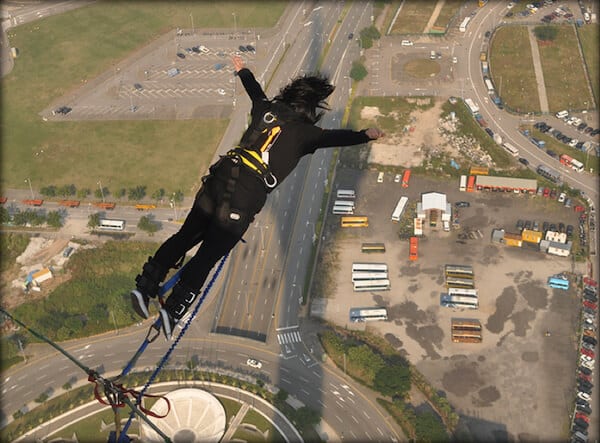 It’s the same with many of the new and different and unknown things you might be encountering in college. The support of a good friend instantly creates the confidence and determination that might have waned as you considered facing some obstacles. It does help when you have a familiar face and voice and calm your nerves!

3. Fear shouldn’t stop you from achieving anything you dream of!

Before I was called to the platform, the bungee jump team was telling me about a girl who was frozen on the jumping platform for 30 minutes before she was able to finally jump. The point of this story was that she actually did jump, despite her being so terrified that she refused to do so for so long.

This applies to everything college. College is a big step. You really are taking a leap of faith that you choose the right school, hopefully luck out on the right roommate, and choose the right professors. If you end up packing your bags and moving across the country to attend a school where none of your high school friends are attending, it’s hard not to be a little scared of the unknown.

Still, you’ve got to follow through! This especially applies to the many people I’ve known or heard about who back out of studying abroad the last minute because they’re too scared of change. Don’t let your fear prevent you from making amazing memories!

4. Doing something wrong is better than not doing anything at all.

If you read my entire bungee jumping story, you’ll notice that I very miserably failed to release my bungee cord from my feed so that it would bring me upright for my landing. Oops. But it didn’t matter that I didn’t do it right, because I came out safe and happy that I did it at all. 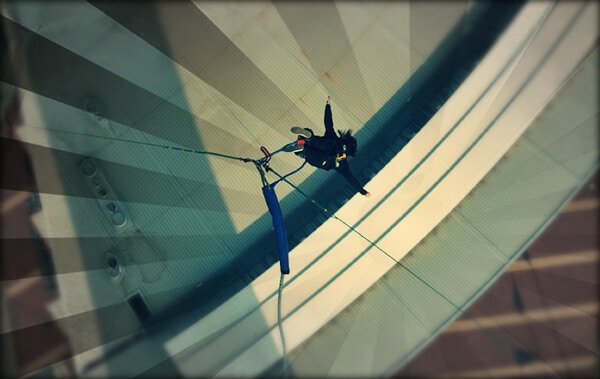 I’ve made speeches where my voice was so shaky all my comment cards afterward would tell me to stop being so nervous because I was doing fine. I’ve also messed up job interviews I really wanted, and I’ve tripped or messed up things badly when meeting important people. But I did it.

I also learned, realized my mistakes, and did better the next time. Most of the time, my mistakes weren’t as noticeable as I thought they were! This is similar to lesson #3: don’t let your fear of doing something wrong prevent you from doing it at all!

5. You can’t put a price on your most memorable life experiences.

Spontaneously deciding to bungee jump is expensive! I think I spent close to $250 on the experience and the photos that came with it. I went well over my budget for my day trip. (Don’t tell my mom!)

But you know what? It’s been nearly 2 years since I jumped and I still remember every moment as if it happened yesterday. It’s the same for when I randomly decided to travel to China to hug a panda, or climbed onto the neck of an elephant to tour the riverbank in Thailand, or went snorkeling in the clear waters of Cebu, Philippines. All of this cost me a lot of money, but it was money well spent.

A lot of my fellow students keep on telling me they would or wish they could do some things, if only they had the money. I say to these wishful thinkers: if you really want it, you will find the money to pay for it!

“If you truly want something, you’ll find the money for it. Money isn’t an excuse.” Tweet This

Studying abroad is very expensive (well, in my case, it was cheaper to travel all over South East Asia and go to school in Hong Kong than pay for 1 semester’s student housing at NYU, but that’s besides the point), but there are ways to do it and not spend a lot. Scholarships, loans, savings. If you are determined and plan well for it, you can make these experiences happen!

Feeling inspired to check something off your impossible list? Don’t rationalize your way out of it. Biting the bullet can be one of the best decisions you’ve ever made for yourself!

Have you done something absolutely crazy that you learned a valuable lesson from? Share it with us in the comments!