This is the start of a new series called “Things That Make Me Fail College”. The idea for it spewed out of my head while I was thinking of ways write about whatever the hell I wanted without anyone noticing me deviating from the whole “college success” subject. If a post about silly internet comics seems too far out for you, here’s a nice article about studying.

Web Comics are probably the 4th greatest invention ever, right behind sandwiches, explosions, and the internet itself. They’re funny, don’t take long to read, and – best of all – don’t force me to get off my butt and walk to the comic store to get them. These online marvels of satire and varying levels of illustrative quality are often the culprits behind my perpetual sleep-deprived state, and they’re also one of the best ways to de-stress after a tough class or an even tougher sessions of Call of Duty. Here are, in my opinion, the best of the best. 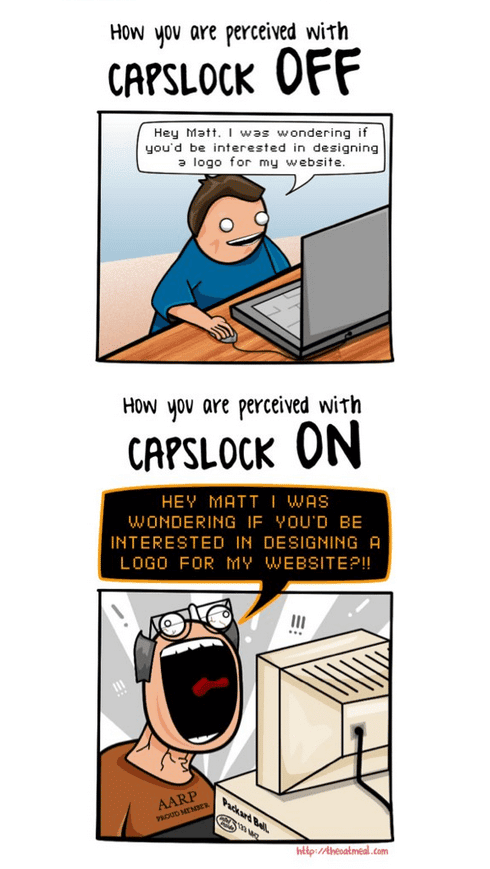 Seriously, if you haven’t heard of The Oatmeal by now, you haven’t been internetting hard enough. Created by Matthew Inman, The Oatmeal provides humorous and often downright insane takes on things that happen in everyday life. Inman also uses the web comic as a vehicle for education, and has created comics that educate readers on everything from how to use a semicolon to why pigs are awesome.

Some of my favorites:

Hyperbole and a Half 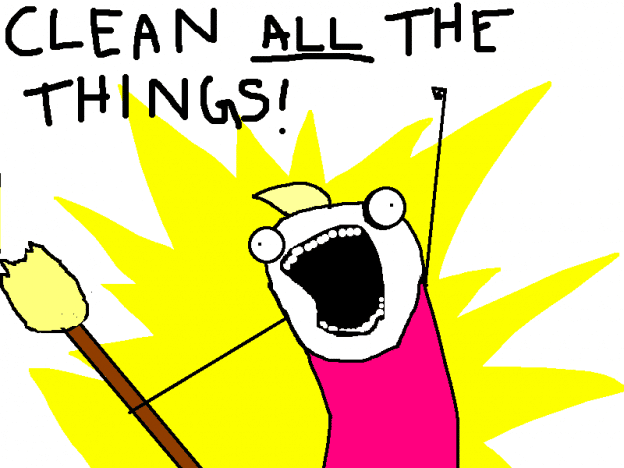 Allie Brosh is another artist who is extremely good at taking normal, everyday stories and making them absolutely hilarious. Hyperbole and a Half is her brainchild, and it differs from The Oatmeal in that the comics are interspersed between many paragraphs of (also funny) textual storytelling. Her explanation on why she’ll never be an adult is particularly hilarious.

Here are some other great ones: 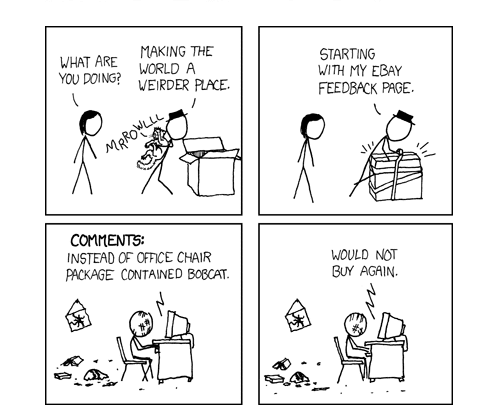 XKCD is a web comic about romance, sarcasm, math, and language – or that’s at least how it’s described. In reality, XKCD is a comic that is funny 75% of the time, and way too smart to understand during the other 25%. It’s written by an ex-NASA robotics expert/programmer, so expect some of it to go right over your head – even if you’re an aerospace engineering major. The comic has spawned many jokes that have made their way out of the web and into IRL, such as the joke about gluing chess pieces to a board and pretending to play chess on a roller coaster.

There are literally dozens of these that I’d consider to be “favorites”, but here are a few:

(It was as this point I got distracted from writing for approx. 3 hours) 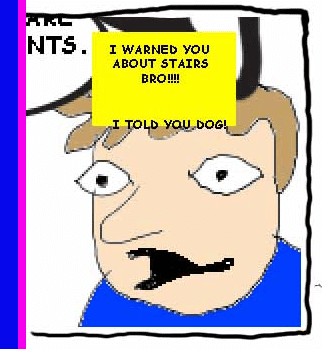 Quite possibly the stupidest, most senseless comic ever made in the history of everything, Sweet Bro and Hella Jeff tells the ongoing story of two dudes who really have no story at all. This comic is best for those who are amused by breathing in helium, as it won’t make sense to anyone with normal sensibilities. However, it did spawn the best 404 page ever.

I think I’ve only got one favorite here, and it has to be the comic about stairs. 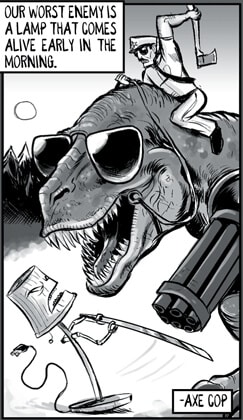 Here it is – my favorite web comic ever created. Axe Cop is a comic that’s drawn by Ethan Nicolle (age 29) and written by his brother, Malachai Nicolle (age 6). You can probably guess what kind of stories come out of a combination like this.

Axe Cop is simply about a cop with an axe. Oh, he might also have a flying T-rex with machine gun arms, but that’s besides the point. 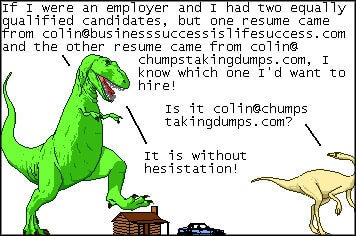 Dinosaur Comics is a unique entry here in that the actual comic never, ever changes. What you get in every strip are the same six panels, with the same two dinosaurs, walking around and stomping on the same house. However, it’s the dialogue that counts here, and Dinosaur Comics has witty dialogue in spades. 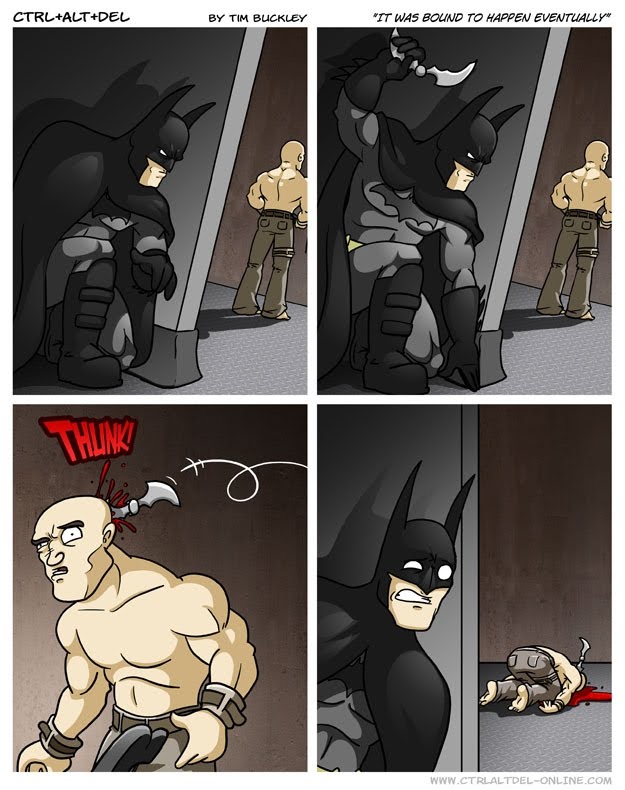 Ctrl + Alt + Del is a heavily gaming-related web comic that also deals with other geek stuff like computers, um… video games, and computers. (honestly is there anything else geeks do?) It’s a very story-based comic, so you won’t want to just jump right in and start reading unless you’re the sort of person who enjoys being confused. For this reason, I won’t post favorites here – just read it! 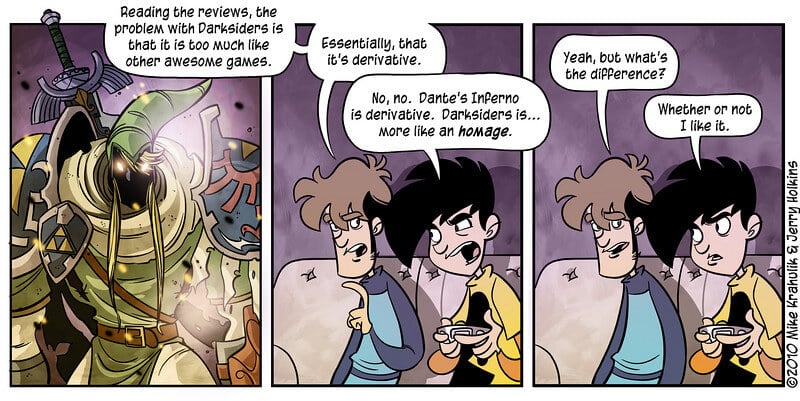 Penny Arcade is another gaming-related web comic that’s actually pretty well-known. One of the comic’s main characters, Tycho, was even featured in last year’s Steam game Poker Night at the Inventory. Penny arcade isn’t really story-based, but it does follow video game news heavily. Still, even if you’re not a gamer, you’ll enjoy some of the jokes.

The Adventures of Dr. McNinja

Seriously, this is just awesome. See that up there? That’s an ninja in a space suit surfing a robot Dracula from the moon (UPDATE: this correction was submitted by multiple people after I described it wrong. Sorry for being ignorant). Doesn’t get much cooler than that.

Dr. McNinja is a comic about a doctor that’s also a ninja. The guy who writes it is pretty good friends with the guy who draws Axe Cop, so you can expect somewhat similar material. That’s about all you need to know. 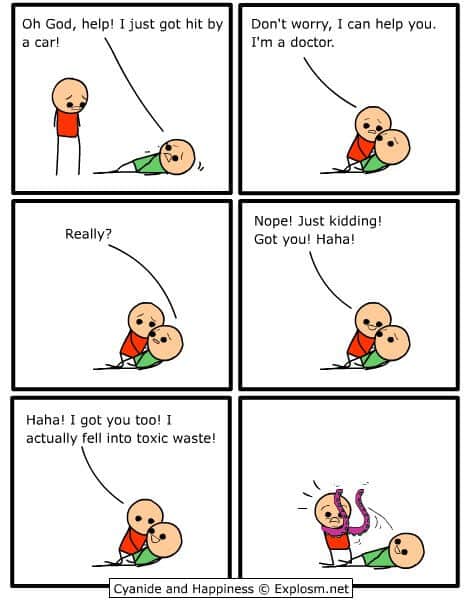 Cyanide and Happiness is a web comic that actually doesn’t have a whole lot of happiness in it. Also, it can be pretty crude at times. However, it’s also really funny, so it’s on this list. 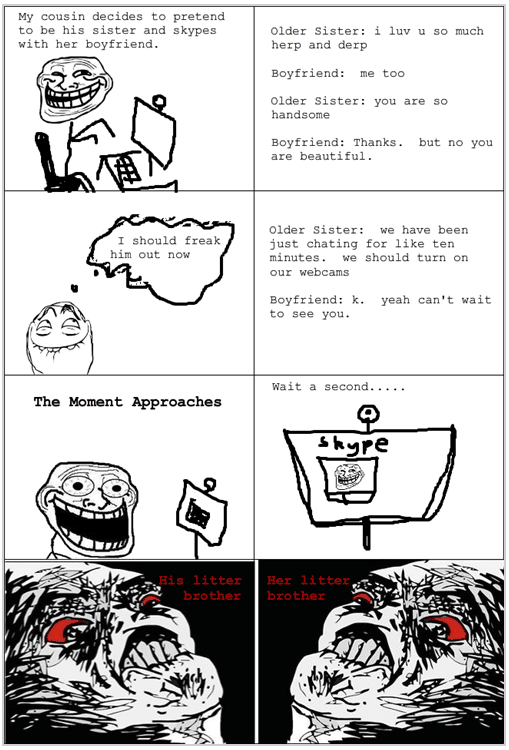 Kept it under a thousand words!